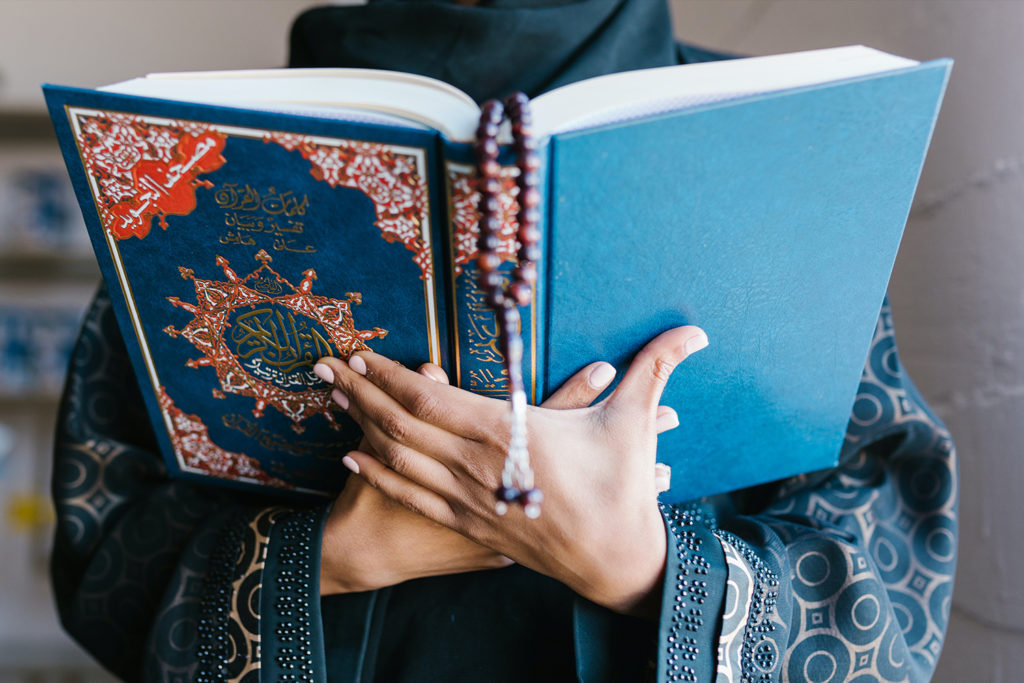 Among the major world religions, Islam is the only non-Christian faith that recognizes the person of Jesus. Qur’an talks a great amount about Jesus. However, Jesus Christ is the most controversial personality in Islam. In the Qur’an, Jesus is referred to in over ninety verses in fifteen surahs. Islam corroborates that Jesus was born to a virgin, was sinless, performed miracles, and was superior to other prophets. Yet, Islam teaches that Jesus was no more than a prophet. It denies the central message of Christianity by denying Jesus’ divinity, crucifixion, and resurrection.
(Yusufali translation)

2:87 We gave Jesus the son of Mary Clear (Signs) and strengthened him with the holy spirit.

3:45 O Mary! Allah giveth thee glad tidings of a Word from Him: his name will be Christ Jesus, the son of Mary, held in honour in this world and the Hereafter and of (the company of) those nearest to Allah.

3:46 “He shall speak to the people in childhood and in maturity. And he shall be (of the company) of the righteous.”

3:48 And Allah will teach him the Book and Wisdom, the Law and the Gospel.

3:49 And (appoint him) a messenger to the Children of Israel, (with this message): “I have come to you, with a Sign from your Lord, in that I make for you out of clay, as it were, the figure of a bird, and breathe into it, and it becomes a bird by Allah’s leave: And I heal those born blind, and the lepers, and I quicken the dead, by Allah’s leave; and I declare to you what ye eat, and what ye store in your houses. Surely therein is a Sign for you if ye did believe.”

3:50 (I have come to you), to attest the Law which was before me. And to make lawful to you part of what was (Before) forbidden to you; I have come to you with a Sign from your Lord. So fear Allah, and obey me.

3:52 When Jesus found Unbelief on their part He said: “Who will be My helpers to (the work of) Allah?”

3:55 Behold! Allah said: “O Jesus! I will take thee and raise thee to Myself and clear thee (of the falsehoods) of those who blaspheme; I will make those who follow thee superior to those who reject faith, to the Day of Resurrection: Then shall ye all return unto me, and I will judge between you of the matters wherein ye dispute.”

4:157 That they said (in boast), “We killed Christ Jesus the son of Mary, the Messenger of Allah”;-but they killed him not, nor crucified him, but so it was made to appear to them, and those who differ therein are full of doubts, with no (certain) knowledge, but only conjecture to follow, for of a surety they killed him not.

4:163 We have sent thee inspiration, as We sent it to Noah and the Messengers after him: we sent inspiration to Abraham, Isma’il, Isaac, Jacob and the Tribes, to Jesus, Job, Jonah, Aaron, and Solomon, and to David We gave the Psalms.

4:171 O People of the Book! Commit no excesses in your religion: Nor say of Allah aught but the truth. Christ Jesus the son of Mary was (no more than) a messenger of Allah, and His Word, which He bestowed on Mary, and a spirit proceeding from Him: so believe in Allah and His messengers. Say not “Trinity”: desist: it will be better for you: for Allah is one Allah: Glory be to Him: (far exalted is He) above having a son. To Him belong all things in the heavens and on earth.

5:17 In blasphemy indeed are those that say that Allah is Christ the son of Mary.

5:72 They do blaspheme who say: “Allah is Christ the son of Mary.” But said Christ: “O Children of Israel! worship Allah, my Lord and your Lord.” Whoever joins other gods with Allah,- Allah will forbid him the garden, and the Fire will be his abode.

5:75 Christ the son of Mary was no more than a messenger; many were the messengers that passed away before him. His mother was a woman of truth. They had both to eat their (daily) food.

5:78 Curses were pronounced on those among the Children of Israel who rejected Faith, by the tongue of David and of Jesus the son of Mary: because they disobeyed and persisted in excesses.

5:110 O Jesus the son of Mary! Recount My favour to thee and to thy mother. Behold! I strengthened thee with the holy spirit, so that thou didst speak to the people in childhood and in maturity. Behold! I taught thee the Book and Wisdom, the Law and the Gospel and behold! thou makest out of clay, as it were, the figure of a bird, by My leave, and thou breathest into it and it becometh a bird by My leave, and thou healest those born blind, and the lepers, by My leave. And behold! thou bringest forth the dead by My leave. And behold! I did restrain the Children of Israel from (violence to) thee when thou didst show them the clear Signs, and the unbelievers among them said: ‘This is nothing but evident magic.’

5:112 Behold! the disciples, said: “O Jesus the son of Mary! can thy Lord send down to us a table set (with viands) from heaven?” Said Jesus: “Fear Allah, if ye have faith.”

5:114 Said Jesus the son of Mary: “O Allah our Lord! Send us from heaven a table set (with viands), that there may be for us-for the first and the last of us-a solemn festival and a sign from thee; and provide for our sustenance, for thou art the best Sustainer (of our needs).”

5:116 Allah will say: “O Jesus the son of Mary! Didst thou say unto men, worship me and my mother as gods in derogation of Allah’?” He will say: “Glory to Thee! never could I say what I had no right (to say). Had I said such a thing, thou wouldst indeed have known it. Thou knowest what is in my heart . . .”

6:85 And Zakariya and John, and Jesus and Elias: all in the ranks of the righteous.

9:30 The Jews call ‘Uzair a son of Allah, and the Christians call Christ the son of Allah.

9:31 They take their priests and their anchorites to be their lords in derogation of Allah, and (they take as their Lord) Christ the son of Mary; yet they were commanded to worship but One Allah: there is no god but He. Praise and glory to Him: (Far is He) from having the partners they associate (with Him).

19:22 So she conceived him, and she retired with him to a remote place.

19:27 At length she brought the (babe) to her people, carrying him (in her arms). They said: “O Mary! truly an amazing thing hast thou brought!”

19:30 He said: “I am indeed a servant of Allah: He hath given me revelation and made me a prophet.”

19:31 “And He hath made me blessed wheresoever I be, and hath enjoined on me Prayer and Charity as long as I live.”

19:91 That they should invoke a son for (Allah) Most Gracious.

19:92 For it is not consonant with the majesty of (Allah) Most Gracious that He should beget a son.

21:91 And (remember) her who guarded her chastity: We breathed into her of Our spirit, and We made her and her son a sign for all peoples.

23:50 And We made the son of Mary and his mother as a Sign: We gave them both shelter on high ground, affording rest and security and furnished with springs.

33:7 And remember We took from the prophets their covenant: As (We did) from thee: from Noah, Abraham, Moses, and Jesus the son of Mary: We took from them a solemn covenant.

42:13 The same religion has He established for you as that which He enjoined on Noah-the which We have sent by inspiration to thee-and that which We enjoined on Abraham, Moses, and Jesus: Namely, that ye should remain steadfast in religion, and make no divisions therein: to those who worship other things than Allah, hard is the (way) to which thou callest them. Allah chooses to Himself those whom He pleases, and guides to Himself those who turn (to Him).

43:57 When (Jesus) the son of Mary is held up as an example, behold, thy people raise a clamour thereat (in ridicule)!

43:61 And (Jesus) shall be a Sign (for the coming of) the Hour (of Judgment): therefore have no doubt about the (Hour), but follow ye Me: this is a Straight Way.

43:63 When Jesus came with Clear Signs, he said: “Now have I come to you with Wisdom, and in order to make clear to you some of the (points) on which ye dispute: therefore fear Allah and obey me.”

57:27 We sent after them Jesus the son of Mary, and bestowed on him the Gospel; and We ordained in the hearts of those who followed him Compassion and Mercy . . .

61:6 And remember, Jesus, the son of Mary, said: “O Children of Israel! I am the messenger of Allah (sent) to you, confirming the Law (which came) before me, and giving Glad Tidings of a Messenger to come after me, whose name shall be Ahmad.” But when he came to them with Clear Signs, they said, “this is evident sorcery!”

61:14 O ye who believe! Be ye helpers of Allah: As said Jesus the son of Mary to the Disciples, “Who will be my helpers to (the work of) Allah?” Said the disciples, “We are Allah’s helpers!” then a portion of the Children of Israel believed, and a portion disbelieved: But We gave power to those who believed, against their enemies, and they became the ones that prevailed.