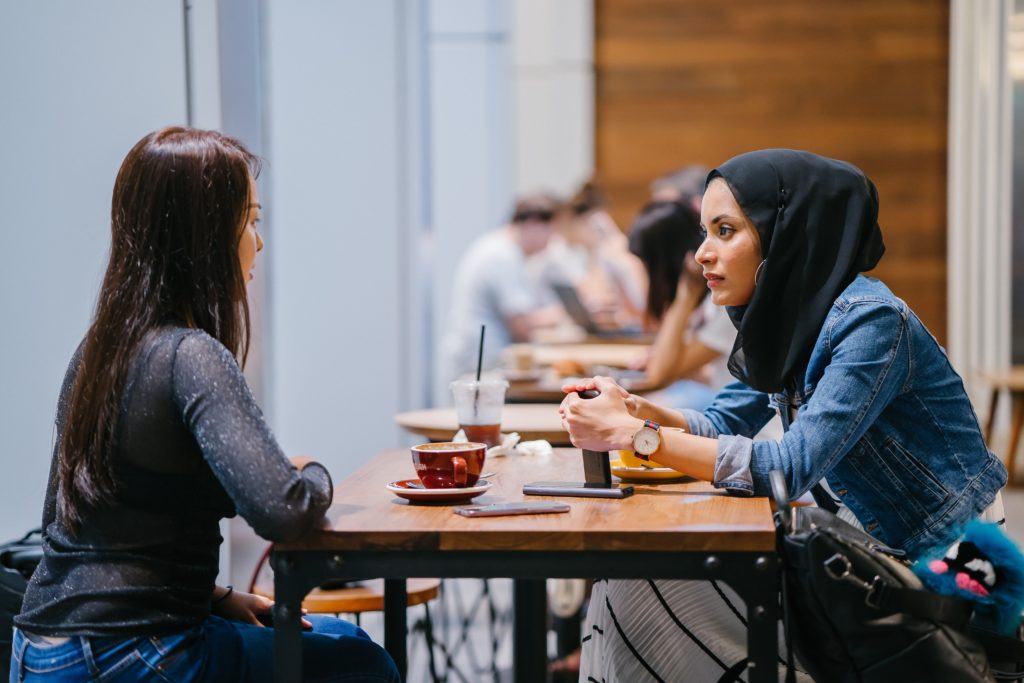 This post gives a brief overview of five of the most common objections to Christianity that we hear from our Muslim friends. Though I cannot give an exhaustive treatment of these topics, I do want to offer some Bible passages to provide natural access points through which to invite our Muslim friends into a deeper engagement with the Christian message in the Bible.

Almost inevitably, at some point your Muslim friend will raise questions concerning the Trinity. At such a point, it’s tempting to try to philosophically defend the rational integrity of the Christian claim that God is one essence in three persons. However, as the previous post argued, inviting someone to read passages in Scripture about the Trinity allows the Bible to speak for itself. This helps demonstrate how God has revealed himself as Father, Son, and Holy Spirit.

The opening of John’s Gospel, for example, provides a natural entry point to discussing the way that Bible reveals God as a Trinity. John’s use of “the Word” as a reference to Jesus coincides with qur’anic references to Jesus as the word of God (cf. Qur’an 3:39, 45; 4:171). John’s Gospel, however, goes on to fill this title with biblical meaning derived from both Old Testament prophecy and the life and ministry of Jesus himself. The doctrine of the Trinity makes sense of passages like this that show Jesus as being equal with God the Father.

Most Islamic scholars contend that Qur’an 4:157-158 teaches that Jesus did not die on the cross. Theories abound as to who it was that actually underwent crucifixion on Good Friday, but most Muslims believe that it would be undignified for God to allow his prophets to be subjected to such derision and shame.

In John 10:17-18, though, Jesus declares that he intends to lay down his life on behalf of his flock of followers. Thus the Christian is able to show that Jesus wasn’t killed by the Jews or by the Romans, but rather Jesus offered his life willingly. At this point the Christian can fruitfully raise the question, “Why would Jesus say something like this?” And the invitation to read the Bible’s message about Old Testament sacrifice and its fulfillment and eternal completion in Christ is a way to provide an answer that not only shows that Jesus did die, but why it is fitting that he would die. (I commend the Book of Hebrews for this purpose.)

Another common accusation you may encounter when sharing your faith with a Muslim friend is that the Bible has been changed and corrupted. Since it is rare that such an accusation ever identifies such a change or corruption specifically, it is helpful again to simply let the Bible speak for itself.

One place that I might commend is 2 Peter 1:16-21. Here Peter shows how the Holy Spirit supervised the prophetic words spoken, recorded in Scripture, which point to Christ’s saving work. The Christian can invite their Muslim friend to read the way that the Bible foretells Christ’s advent, the way Christ’s actions fulfill prior revelation, and how the Jesus of the Bible holds together the biblical storyline of creation, fall, redemption, and restoration. In so doing, one demonstrates the “wholeness” of the biblical narrative, and can then ask, “Does this story seem as if it has been changed along the way, or does it actually make sense of the world we live in?”

4. We’re really mostly the same with only a few small differences: John 14:6

The final two objections bear some similarity to one another. The first tends to downplay the distinctives between Christianity and Islam, highlighting instead commonly held ethical teachings. While it’s true that Christianity and Islam exhibit many superficial similarities, they have deeper areas of disagreements such as the remedy for sin.

For Muslims, sin occurs when one forgets the way of God. The solution offered by the Qur’an and all of the prophets is guidance back to the straight path of Allah. In John 14:6, however, Jesus’ words to his disciples testify that he himself is the way, the truth, and the life. This passage illustrates a fundamental and irreconcilable difference between the teaching of the Bible and the Qur’an. Where Islam provides guidance to please God, Christ provides satisfaction of God’s wrath and extension of his purifying, forgiving, adopting, and commissioning love.

5. We believe in all of your prophets, why don’t you believe in ours: Matthew 24:5

Perhaps this is the most controversial recommendation in the list, but when a close friend with whom I have had significant conversations about faith in the past presents this final argument, I often take them to Matthew 24:5. As Jesus prepares his disciples for his departure, he warns that there will be many who will follow him whose teaching is false.

I usually establish that we both believe that God exists and that he has an enemy who also exists. If we can agree that God has provided a way of salvation—a way to please God—then it makes sense that his enemy would seek to offer alternative ways that do not lead to God. If, then, we are looking at two books that are incompatible, but which both claim to be God’s word to humanity, we have two options: both books can be wrong, or one can be right.

At this point, rather than merely coming out and saying that I believe the Qur’an to be a tool of God’s enemy, I instead invite my friend to read Scripture with me in order to be able to compare the story that the Bible tells about the world with the story the Qur’an tells about the world. I try to lead them to draw conclusions as to who is a prophet of God and who is a distraction from God’s ways.

Again, the important thing is to seek to show the Bible’s whole story through inviting your Muslim friend to read the Bible with you. This approach intends to uphold and display the claim that the Christian is a “person of the Book.” While it may require a longer investment than other methods, it holds out the source of our convictions and commends it on its own merits to our Muslim friends. The next and last post of this short series will suggest some practical means of meeting, engaging, and loving your Muslim neighbor where you are.