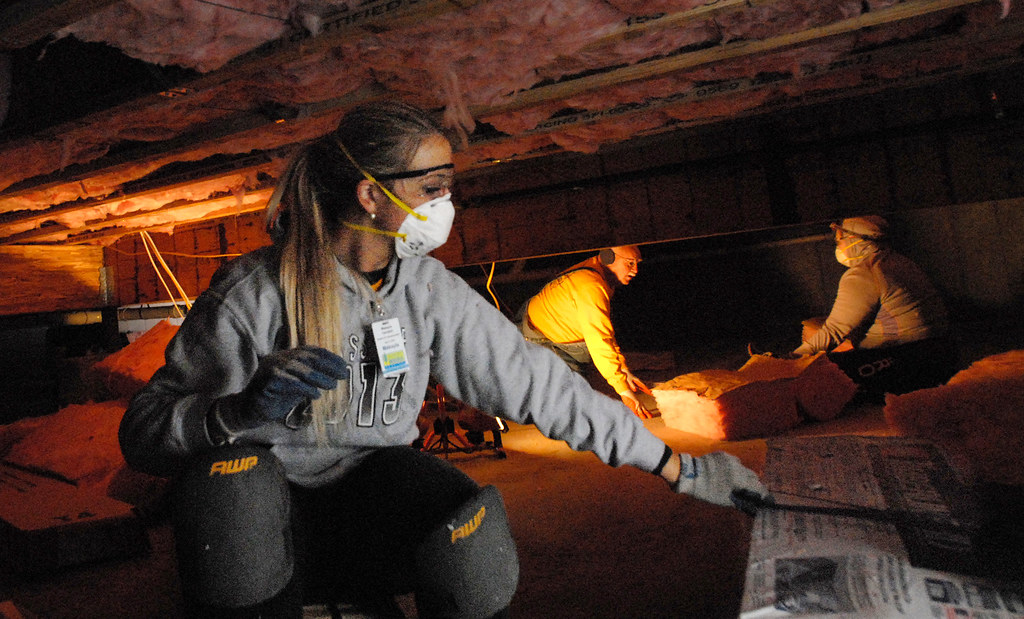 LONG BEACH, N.Y. – Two and a half years after Superstorm Sandy struck, Jim Clark and his wife, Ena, of Long Beach, N.Y., are working to get into their new home with the help of Southern Baptist volunteers.

Sandy’s storm surge lifted and shifted their home of 35 years off its foundation.

The couple watched as the ocean water rushed up their street and evacuated their home to spend the night on higher ground at a neighbor’s house. The water quickly receded but the whole beach community was flooded.

“In just a few minutes, all the damage was done,” Clark said.

The home was condemned and demolished and the couple decided to build a new home but exhausted their funds and insurance before finishing mostly just interior construction.

Clark said he is impressed with the way the volunteers work and finds them to be “a real God send. They are some of the nicest people we’ve ever met. They come in and they go to work.”

Students have also served during the response phase working from Staten Island in December of 2012 and during their winter breaks in 2013 and 2014 in the recovery and rebuild phase.

“This is the third spring break that students have come to New York to serve families affected by Sandy,” said Fritz Wilson, executive director for Disaster Relief at the North American Mission Board (NAMB). “It is amazing to see the passion college students have for serving families with physical help as well as sharing the hope of the gospel two and a half years after Sandy impacted Long Island,” Wilson said.

“The collegiates are dedicated and focused and many have returned to work two and three times. They closed out 11 jobs in March,” said Sandy Rebuild Project Coordinator Bill Johnson.

The initiative is a partnership that includes NAMB and North Carolina Baptist Men working in cooperation with the Baptist Convention of New York, Metro New York Baptist Association, New Jersey Net and local churches throughout North America to repair and help restore communities physically and spiritually.

While Johnson says the project has been blessed with the number of volunteers so far, he emphasizes the current need as the work has progressed for volunteers with construction and home repair skills, such as drywall, insulation, sheetrock finishing and light carpentry skills.

“The primary need is for skilled construction crew leaders for volunteers who are committed for the rest of spring and into August when the work will wind down,” he said.

Johnson said people still are requesting help with most coming from referrals from outside caseworkers. Most of them in need are elderly, widows or widowers, who are living alone in deteriorated homes. They did not seek help early on through various programs and fell through the cracks, he said.

Johnson and his wife, Donna, have served with SBDR since the day after Sandy struck with its storm surge bringing up to eight feet of water in some areas which damaged thousands of homes along the coasts of New York and New Jersey. The couple, who are members of Liberty Missionary Baptist Church in Cannonsburg, Ky., first served with Incident Command in New York and now work out of New York Institute of Technology in Central Islip, New York. The college has housed  SBDR volunteers in its dormitories since January 2014.

The college and The American Red Cross helped make resources available for the work to continue through August 2015. Community leaders upon learning that SBDR was planning to leave at the end of 2014 requested the team to stay on, said Wilson.

“It’s an affirmation that we are an effective organization in doing this kind of work,” said Wilson.

“This has been an amazing experience. We’re trying to thank them for all that they are doing, and they’re thanking us for letting them come in and help. We’ve actually had volunteers cry when they leave because the work is not finished,” said Clark.