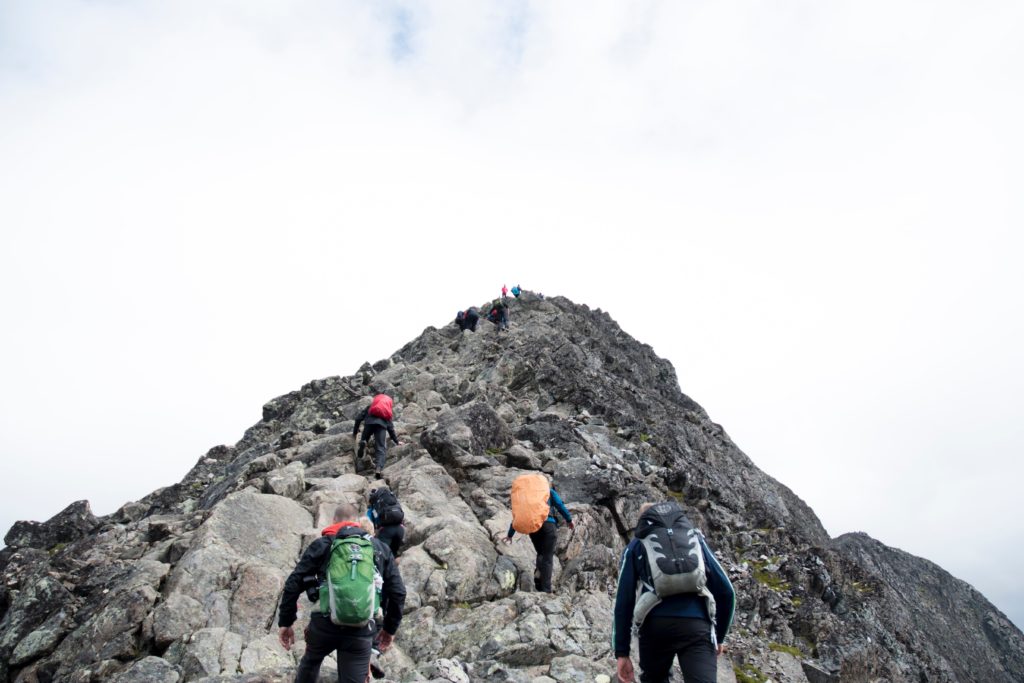 Simon Peter is called to follow Jesus amid tangled nets, the taste of salty sweat on his tongue, fish slime, the snap of the sail, the cadenced pulse of the waves and the customary burdens of the daily life of a fisherman.

When Jesus says, “Follow me,” Peter immediately drops his nets and leaves everything to follow Him. He was the first to publicly confess Jesus as the Messiah and Son of God.  Aside from being the first to confess Christ, he was the first apostle to extend the Gospel to the Gentiles (Acts 10). Peter’s leadership and teaching set the stage for the church’s expansion and growth throughout the apostolic age (Acts 1–15; 1 and 2 Peter).

But his leadership and influence throughout church history all began by following.

We, too, are called to follow Jesus amid the busy (and sometimes mundane) rhythms of daily life. We are to drop our proverbial nets and follow the Master.

Jesus uses a play on words with Peter (whose name is Petros) and the Greek word for rock (petra) when he states in Matthew 16:18: “And I tell you that you are Peter [Petros], and on this rock [petra] I will build my church, and the gates of Hades will not overcome it.”

Note that Jesus says, “I will build my church.” There is a triumphant authority in this promise. As John Piper puts it:

Christ will build his Church, and we follow Him as he does so.

Then in Matthew 28, Jesus speaks His the last words to the disciples (known as “The Great Commission”) before transcending to heaven, saying, “go make disciples.”

“Then Jesus came to them and said, “All authority in heaven and on earth has been given to me. Therefore go and make disciples of all nations, baptizing them in the name of the Father and of the Son and of the Holy Spirit, and teaching them to obey everything I have commanded you. And surely I am with you always, to the very end of the age.” (Matthew 28:18-20)

It is out of His own authority that Jesus calls his disciples to go and make disciples of all nations, by baptizing them and teaching them what He has commanded. Jesus is present with them. He goes with His disciples as they go. He builds His church by His authority and through His presence with the disciples as they are sent into the world on mission.

It is God’s Mission, Missio Dei. We are merely following Him as he does what He said He will do — build His Church.

And while our following Jesus may not happen among tangled nets or among pulsing waves like Peter, the invitation to follow Him and fish for men and women remains the same.

As we fulfill our individual callings — whether it be church planting, teaching a Sunday school class or sharing the gospel with our neighbors — may we always remember our leading in any context begins with following the King.

This article first appeared on Missional Mayhem and is used with permission.

Tiffany Smith is a Texas girl, but she has a worldview even bigger than that fair state after visiting and serving short term in 27 different countries.  Spending two years as a missionary in Japan was the catalyst for her to be addicted to living the “SENT Life” – here or there.  Tiffany pursued and completed a doctorate degree in Missional Leadership from NOBTS, and she blends her academic and personal gifts to encourage and equip others in “living sent” as a Regional Equipper for Canada with the North American Mission Board.  As a former schoolteacher and youth minister, Tiffany has a particular heart and passion for developing the next generation of leaders in living a missional lifestyle.  You can connect with her on twitter (@tiffanydsmith) or through her blog at missionalmayhem.com.