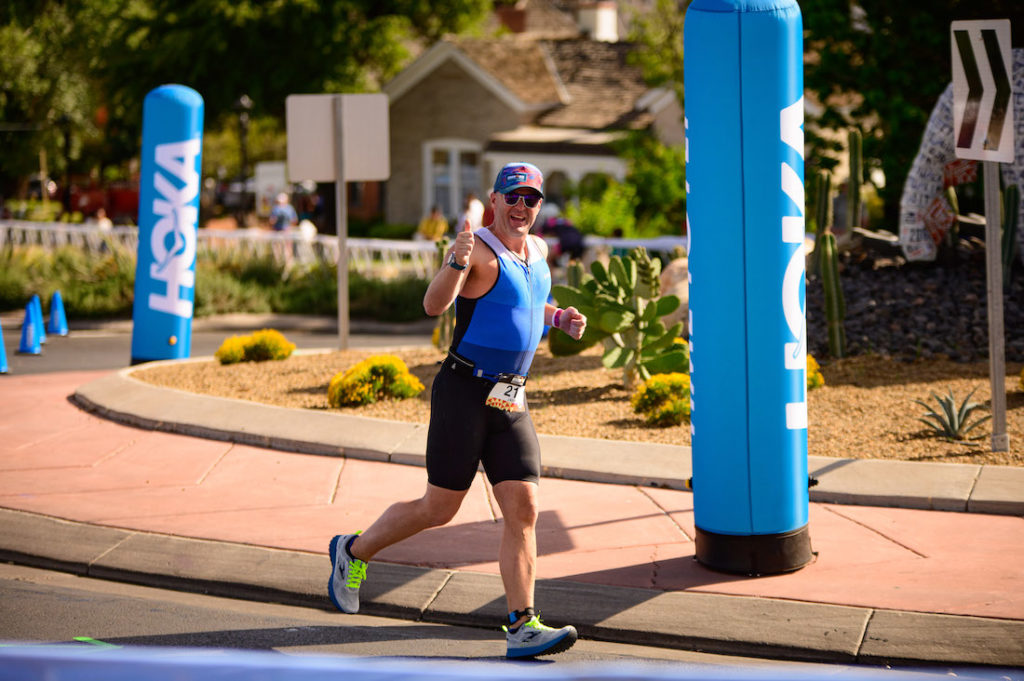 The goal: to glorify God by encouraging pastors and church planters by emphasizing longevity in their ministries.

Hodges serves as a church planting leader in New England for Send Network, the church planting arm of the North American Mission Board (NAMB). He has supported Southern Baptist church planting efforts in the region for the last several years. His focus during this challenge is to support pastors and leaders in each state where he will be completing a triathlon.

“About ten years ago, I said I wanted to run a marathon in every decade that the Lord gives me,” said Hodges. “It’s always bothered me that I never got to meet either of my grandfathers. Even to this day, it’s a hole in my heart.”

Both of Hodges’s grandfathers died relatively young before Hodges ever had the chance to meet them, and he developed a resolve to do everything in his power to live longer and be part of the lives of his grandchildren.

“I might die tomorrow, but I’m going to die healthy, strong and giving God my all,” Hodges said.

When he started running marathons, Hodges became hooked and decided to take his training to the next level by competing in an Ironman triathlon, but he wanted to find a way to connect his new hobby with his lifelong passion of serving pastors and leaders.

Over the years, that developed into highlighting the importance of health and discipline in achieving longevity in ministry. It requires mental, spiritual and emotional health, not just physical. So, Hodges launched into achieving his goal of running six triathlons in six days to encourage ministers to persevere.

“It’s called the One More challenge: one more opportunity, one more day, one more moment,” Hodges said. “Since today is all I’ve got, I’m giving God my all. What does it look like to live each moment like that?”

That message meets pastors in a particularly dire season following the turmoil and continued fallout of 2020. Barna released a study in 2021 that indicated a significant percentage of pastors were nearing burnout with 38 percent sharing that they considered leaving pastoral ministry in the last year.

Based on their surveying and analysis, Barna discovered that only one in three pastors can be considered healthy in terms of their overall well-being. The “October 2021 data show that many pastors are not faring welling in multiple categories of well-being, including spiritual, physical, emotional, vocational and financial,” read the study.

Hodges launched his challenge to remind ministry leaders that the goal of perseverance is achieved by focusing on taking one more step. As a part of his journey of swimming 2.4 miles, biking 112 miles and running 26.2 miles to complete a triathlon each day, he will also be sharing a message that he hopes will motivate leaders.

A friend will be following along, creating a short documentary that will highlight six themes for enduring through difficult seasons and challenges, and he will not be traveling alone.

“The running and the biking and the swimming are a simple illustration of how hard life is,” Hodges said, “and I want to use that opportunity to, moment by moment, give God glory and tell my story.”

The states Hodges will be visiting comprise New England—Vermont, New Hampshire, Massachusetts, Connecticut, Rhode Island and Maine—the region Hodges serves as a Send Network church planting leader. Several pastors and church planters will come alongside him at different points along the way to swim, ride or run with him.

The One More challenge begins Monday, Sept. 26, beginning at Radiant Christian Church in Warren, R.I., and Hodges and the team supporting him have put together a detailed plan.

Leading up to the race, Hodges trained with renowned endurance athlete James Lawrence. Known as The Iron Cowboy, Lawrence completed 50 Ironman races in 50 days across 50 states, and he has been coaching Hodges in what it takes both mentally and physically to tackle such a feat.

An accomplished nutritionist has also been working with Hodges to provide him with a strategy to remain properly nourished and hydrated during his six-day trek.

“This isn’t a game,” Hodges said. “I’ve taken this process very seriously because there’s risk involved in taking on a challenge like this. If you do it right, it’s not dangerous. If you don’t do it right, there’s no way you can finish these triathlons.”