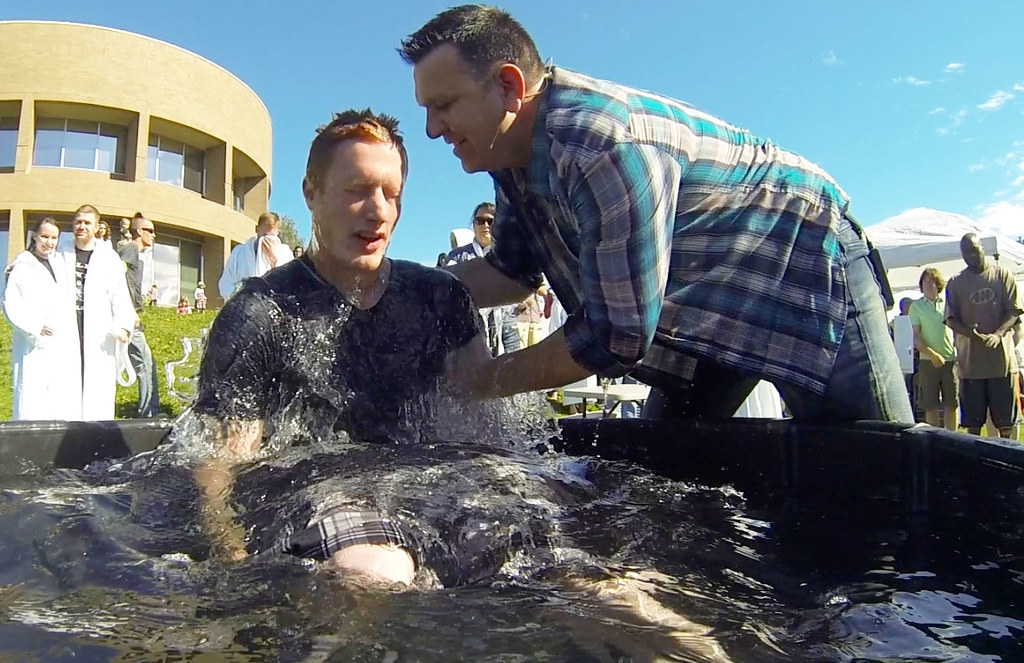 ANCHORAGE, Alaska – Jason Storter had no interest in church when his wife, Mariah, asked him to join her at a new Anchorage church plant, called True North Church.

An avowed atheist, Storter told True North’s pastor, Brent Williams (@brentlwilliams), he was only attending to make his wife happy. He said he’d be gone when football season started. He didn’t plan to get “duped by this Jesus-stuff.”

Over time Storter’s walls began coming down, and he and Williams started regularly meeting for coffee. On one such occasion, Storter mentioned he needed to get his house painted and a couple of his friends had bailed on him. A thought came to Williams’ mind: Could the mission team in town from a Texas Baptist church help Jason? A few hours later the mission team had stripped the paint off the house and was spending the afternoon getting to know Storter. Storter couldn’t seem to understand why these people from Texas would help him and ask for nothing in return.

“A couple of weeks later, after church, he rolled down his window and said, ‘Brent, today I was duped by Jesus.’ I said, ‘What do you mean? And he said, ‘Jesus is my Savior,’” said Williams.

Three years later, Storter is a life group leader at True North, serves in the church’s children’s ministry and has led many others to faith in Christ. Only five years after Williams moved to the state from Texas to begin the work of church planting, True North averages around 300 in weekly attendance.

Thanks to True North and a growing number of Alaska Baptist church plants, people far from God in the Land of the Midnight Sun are coming to faith in Christ. Prior to 2012, Alaska Baptists had planted, on average, one to two churches a year.

Church planting in the state had slowed so much by 2011 that Mike Procter, the executive director of the Alaska Baptist Convention, told the North American Mission Board’s (NAMB) Steve Bass his state wouldn’t need the $150,000 NAMB was providing Alaska for church planting the following year. NAMB then allocated the money elsewhere. By the following year, the situation had reversed. New church plants in the state were on the rise. Procter then asked Bass for an additional $100,000 to fund the flurry of church planting requests coming in. NAMB sent the funds.

“Even though Southern Baptists have had this incredible interest [in church planting] in the urban centers, we’ve got Alaska, a rural state convention, that is nowhere near an urban center and God has blessed them in an incredible way,” said Bass, NAMB’s West Region vice president.

Procter suggests the increase in church planting has been an answer to fervent prayer for God to send laborers.

“We have a prayer strategy called 938, where every morning at 9:38 and every evening at 9:38 we encourage people to pray unto the Lord of the Harvest for Him to bring laborers,” said Proctor, on the prayer emphasis named after Matthew 9:38. “We’ve been doing that over the past few years and people have been sensing God’s call to come and partner with us in Alaska.”

It hasn’t just been outside laborers who have come to Alaska to start churches. Larry Macknicki has been in the state since the 1980s. A committed atheist with a stark conversion story only five years ago, Macknicki found himself in 2011 in a low-paying computer programming job, trying to make sense of where God had him. As he did so, he began reflecting on the question “What would Jesus do?” in relation to his work environment.

“The answer was very, very obvious,” Macknicki said. “Jesus would be reaching out to those He had placed around me and tending to their spiritual needs.”

To try to reach people like his co-workers with the gospel, Macknicki started In His Steps Community Fellowship in what he calls a “secular place at a secular time.” At the time, he didn’t even see it as a church.

Despite the increasing number of church plants in the state, Procter says the work isn’t done. He points to the spiritual needs in the state’s largest city as an example.

“If every church was filled to capacity with current seating, we’d only have enough seats for 5 percent of our population in Anchorage,” Procter said. “Send your best people to Alaska. Keep praying. Keep supporting the Cooperative Program.”

To find out how God could use you and your church in Alaska, visit namb.net/mobilize-me.