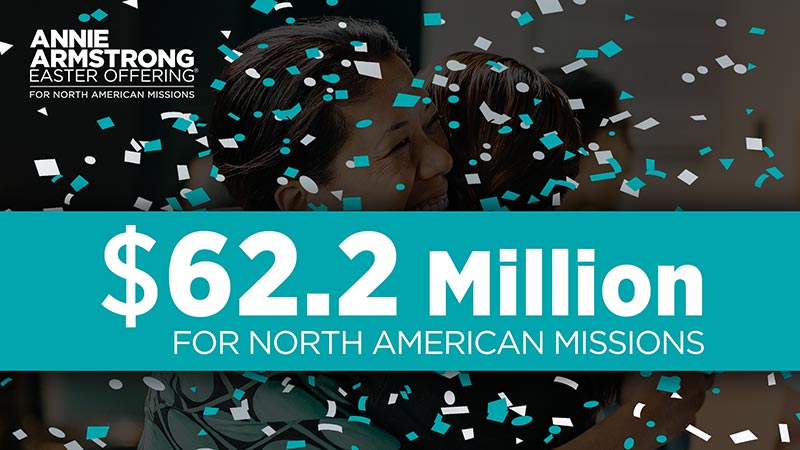 On Monday, Oct. 7, Southern Baptist Convention Executive Committee president Ronnie Floyd revealed the third consecutive record-breaking Annie Armstrong Easter Offering® total of $62.2 million via a video call to the trustees of the North American Mission Board (NAMB). The trustees gathered for a celebration dinner in San Francisco to honor church planting missionaries during their fall board meeting. NAMB photo by Greg Schneider.

The offering, all of which goes directly to the field to resource missionaries and their work, surpassed previous record highs—$61.2 million in 2018 and $59.7 million offerings in 2017.

“It also demonstrates the outstanding confidence our churches have in the future of what we are doing through North American missions under the gifted leadership of Dr. Kevin Ezell and his team,” Floyd said. “Together our churches are able to do great things for God.”

“First, we thank God,” Ezell said. “He can fund this mission and carry it out any way He chooses, but he allows Southern Baptists to play a part, and He allows NAMB to serve Southern Baptists.

“And thank you pastors who make this offering a priority,” Ezell continued. “This would not have happened without your leadership, your initiative. To every Southern Baptist who sacrificially gave to this offering—we also say thank you.”

Sandy Wisdom-Martin, executive director of national Woman’s Missionary Union (WMU), attended the ceremony as an honored guest of NAMB given the key role WMU has in promoting the annual offering.

“We are incredibly grateful committed Christians see the urgent need and give sacrificially so the Gospel may be proclaimed in North America,” Wisdom-Martin said.

“We have a responsibility to take the gospel to north America, and it is our joy—it is our privilege—to hold the ropes for you, to pack Annie envelopes for you. Whatever we need to do, we are willing to stand with you,” Wisdom-Martin said. After revealing the third straight record-breaking Annie Armstrong Easter Offering® total of $62.2 million, North American Mission Board president Kevin Ezell welcomed national director of Woman’s Missionary Union (WMU) to the stage as an honored guest. WMU is a vital missions partner in helping to promote and develop the Annie offering, supplying materials to churches that help them encourage their congregations to give. NAMB photo by Greg Schneider.

WMU collected the first offering for North American missions in 1895 and continues to be a key ministry partner, helping to develop and distribute promotional materials to Southern Baptist churches.

Money given to the offering is spent in the year in which it is received. NAMB reports the expenditures to its trustees and WMU. Proceeds also help fund missionary assessments, training, coaching and care. A stipend for student missionaries serving through GenSend is funded by the Annie offering as well. Shortly after announcing a $62.2 record-breaking total for the Annie Armstrong Easter Offering®, North American Mission Board (NAMB) president Kevin Ezell introduced 11 church planting couples who had the opportunity to meet with NAMB trustees to share their testimonies of how God has been moving in the Bay Area. The event was part of the fall meeting of the NAMB trustees in San Francisco. NAMB photo by Greg Schneider.

“Everything we do is about spreading the gospel throughout North America,” Ezell said. “What Southern Baptists give and sacrifice to make that happen will impact countless lives for an eternity to come.”

The population of North America is 363 million, and 273 million—75 percent—do not have a relationship with Jesus Christ. NAMB exists to help equip churches to be on mission to reach those in need of the gospel in their own communities and across the continent.