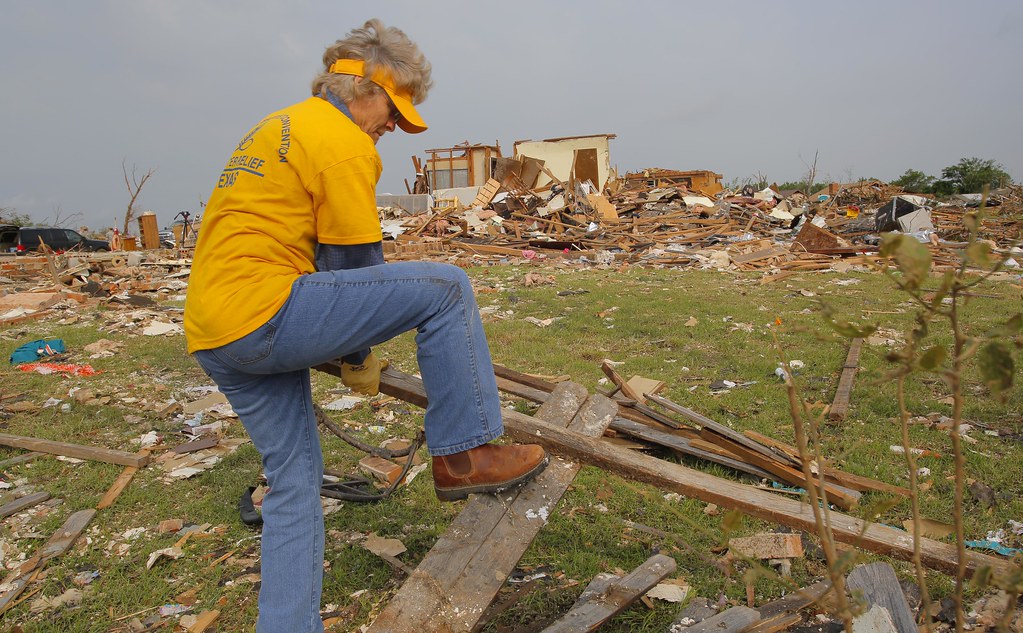 “Paul Bettis is leading our chaplain team,” said Porter. “They were on the ground at the schools with the families as they were searching for their children. Paul was involved in several official notification visits, as well.”

Porter said security in the affected area remains tight, but feeding and laundry units are already serving. As of lunch on Wednesday, Oklahoma SBDR volunteers had already prepared more than 9,100 meals and made 269 ministry contacts. Oklahoma SBDR has 105 volunteers engaged.

“We will need clean up assistance for four to five weeks at a minimum,” said Porter. “Because of the nature of the storms there will not be a lot of chainsaw work, but the debris clean up will be big.”

The series of storms that moved through the area Sunday and Monday left a 70-mile-long track of EF4 and EF5 tornado damage, Porter said. SBDR crews from Texas Baptist Men were already in Shawnee in response to the EF4 tornado that struck the Oklahoma City suburb Sunda

Fritz Wilson, executive director for Disaster Relief at the North American Mission Board said a multi-state response is expected in support of Oklahoma SBDR efforts. Wilson said he expects to see crews working in the affected areas Friday or Saturday.

“Our prayers are certainly with the people of Moore, and all of the affected areas,” said NAMB president Kevin Ezell. “Oklahoma Baptists have one of the best disaster relief teams in North America.”

“The prayers, support and concern of Southern Baptists has been overwhelming,” said Porter. “Don’t stop praying.”

“The heart of Southern Baptists comes through in ministry like this,” said Wilson. “Oklahoma Baptists went into action immediately following the storm.”

First Baptist Church, Moore is hosting an Oklahoma SBDR feeding kitchen. The church, which also served as a ministry center in response to the 1999 storm that struck Moore, will host a NAMB mobile command center.

Wilson said the multi-state nature of the response exemplifies the critical nature of the partnership among Baptist state conventions and NAMB in disaster relief.