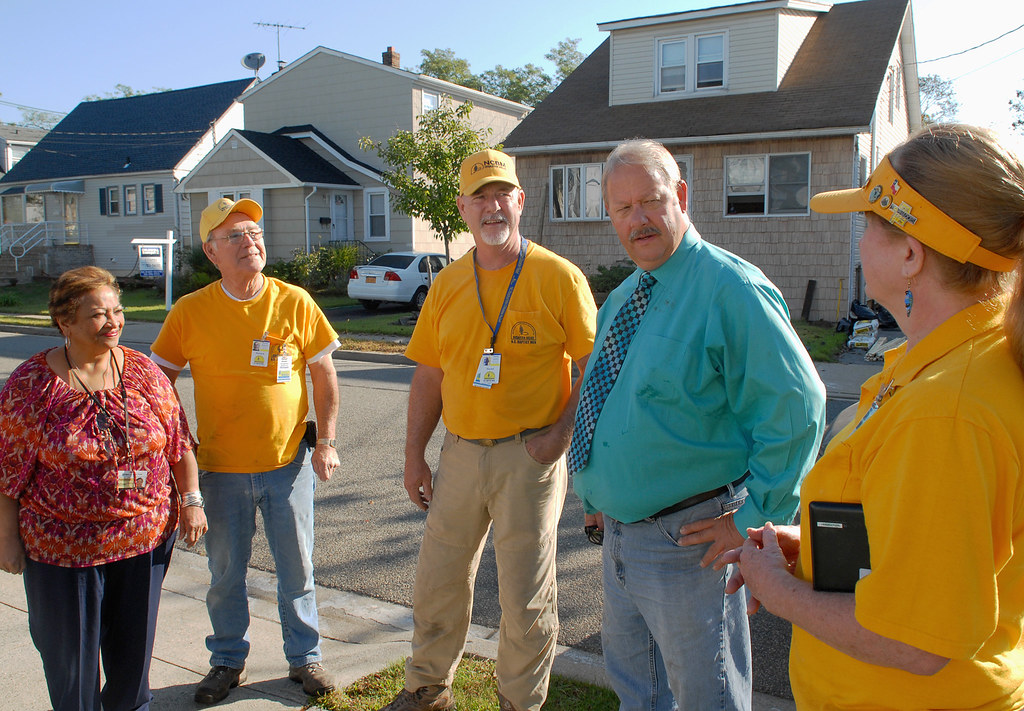 LONG ISLAND — In the picturesque coastal village of Freeport on Long Island, N.Y., where super storm Sandy’s surge flooded homes with as much as eight feet of water, neighborhoods look back to normal—at least on the outside. Eleven months after the storm—with the damage primarily seen on the inside of homes—streets are clear of debris and most of the dumpsters that were filled with salt-water soaked furniture, appliances and ruined contents of homes are gone. But pod storage containers still sit on driveways as homeowners work on the interiors of their homes. One local refers to the sight as the “new normal.”

Freeport is just one of the many affected areas where Sandy Rebuild teams are working in New York and New Jersey to help homeowners put their lives back together. Southern Baptist Disaster Relief (SBDR) volunteers are providing much of the labor.

Not expecting the magnitude of the surge, many residents like Barbara and Brian Hindley did not evacuate, riding out the storm. Residents continue to live in their flooded out homes, some with only partial power, while repairs are made.

“We watched the water coming up the stairs,” said Barbara Hindley. “We didn’t expect it. We sat in chairs with blankets in the dark and waited for the night to be over.”

SBDR teams from North Carolina and Maryland did a complete tear out of the first floor, built new stairs and put in floors at the Hindley home. The couple, in their 80s, continues to live upstairs amidst ongoing repairs.

Southern Baptists plan a two-year rebuild effort, said Mickey Caison, NAMB SBDR recovery coordinator and overall director for Sandy Rebuild. The partnership includes the North American Mission Board (NAMB) and North Carolina Baptist Men working in cooperation with the Baptist Convention of New York, Metro New York Baptist Association, New Jersey Net and local churches throughout North America to repair and help restore communities. Most of the work is on Long Island, where more than 60 percent of the state’s recovery needs are found, on Staten Island and Allenwood, N.J., he said.

“Our goal is to build a robust system of rebuild and recovery like Southern Baptists already have for disaster response,” Caison said. “Historically, SBDR is good at response with almost 90,000 trained volunteers and 1,600 mobile units, but usually we leave a community within a few weeks or months because the response is over and the recovery is beginning. Recovery can take two, three or more years.

“We’ve brought the help in the past and started the healing, and there’s been a lot of times where we’ve shared the gospel so we’ve brought hope in unique places. But by going in now with the rebuild and the recovery aspects of things we can stay involved with that family sometimes for weeks or months,” said Caison.

Robert Kennedy, mayor of The Village of Freeport, says he’s thankful Southern Baptists and other groups are helping the community of 50,000 recover. Four thousand homes were damaged and 500 are still vacant. Sixty to 75 homes are tagged for demolition, he said. The damage was massive with 13,000 tons of debris (53,000 cubic yards) hauled away.

“We’re cautiously optimistic here but everyone is a little nervous about storms now,” said Kennedy.

Sandy Rebuild project coordinator Bill Johnson said even people from the affected area and beyond often ask him, “Why are you still here?” After the initial response and cleanup, most of the damage is now unseen and many think everything is okay, he says.

In Freeport, as in other coastal areas on the south shore of the island, the storm surge flooded every structure for almost one mile inland from the ocean. While the salt water came in and went out within hours, it left plenty of destruction – corroding electrical boxes, HVAC units and plumbing systems.

“There are many, many homes that need repair and that’s what we are doing,” said Johnson, a volunteer from Grayson, Ky. Even with damaged materials torn out, many homeowners do not have the resources to do necessary repairs. In the rebuild phase, Johnson said SBDR will keep its main presence on Long Island, but will also have a presence on Staten Island.

Johnson said the community has “embraced Southern Baptists so readily and quickly” even though he was warned by one local that New Yorkers are skeptical and may feel you are “working an angle” when you work for free.

“Mickey and I keep saying that God is up to something powerful here,” said Johnson.

Vannoy, who works closely with homeowners and volunteers, said meeting physical, as well as spiritual, needs is why Southern Baptists serve. Lasting relationships are formed and homeowners, like the Hindleys, remember the volunteers who serve them.

“Those relationships then grow into great opportunities to share Christ,” said Caison.

“They’re angels,” said Mrs. Hindley, of the volunteers. “I’ve got pictures of them on the mantel and still correspond with them. They keep us in their prayers. They were so lovely and so kind. They thanked me for letting them help, instead of me thanking them.”

To volunteer for or learn more about Sandy Rebuild visit https://www.namb.net/Sandy.