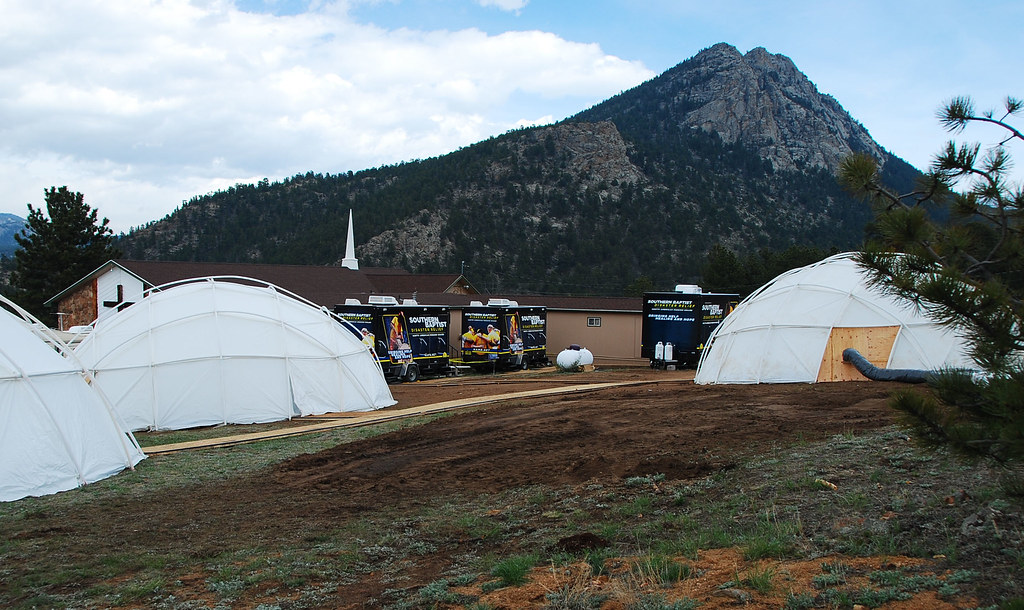 ALPHARETTA, Ga. – Southern Baptist Disaster Relief (SBDR) teams continue to provide help, healing, and hope to the victims of last year’s floods in Colorado and Montana as they resume the recovery efforts after a long, cold winter.

The floods destroyed approximately 18,000 Colorado homes last September, 80 percent of which were located in Boulder, Larimer and Weld Counties where SBDR volunteers are concentrating rebuild efforts.

There are currently 40 SBDR volunteers working in Colorado according to North American Mission Board (NAMB) DR rebuild coordinator Mickey Caison. His goal for the summer is to recruit 50 volunteers per week from now until Oct. 31.

“We get to see a magnificent transition,” said Caison. “Often [these survivors] don’t have hope. But when our volunteers get on site and get started it really makes a difference in them emotionally, physically and spiritually.”

NAMB DR executive director Fritz Wilson said that SBC church groups can participate even if they do not have the formal SBDR training that is typically required to respond immediately after a disaster occurs.

“We will take any church group willing to come from wherever they are across the country to help families rebuild their homes,” said Wilson. “The work is very similar to what groups did during the rebuild efforts after Hurricane Katrina. All a team needs is a willingness to serve and a couple of team members who understand basic construction skills.”

While many teams have come from Denver churches and church plants, more than 10 other state Baptist conventions from across the nation have also sent teams to Colorado.

The need for volunteers is more significant now than ever before. Caison reported that immediately following the flood, many of the damaged homes were unreachable because so many roads and bridges had been destroyed. However, now that initial repairs have been made, access to more houses is possible, increasing the workload for this project.

“A lot of times our people want to respond to the latest and most urgent disaster and they forget about the people that were hit by a disaster a while back,” said Wilson.

According to Wilson, there are many homeowners who have literally been out of their homes through the winter. So there is an urgency to get these recently accessible homes cleaned out and repaired before next winter.

While some construction work is needed for this rebuild, including carpentry, roofing and painting, Caison said the biggest task is to clean out or “mud-out” all of the dirt, boulders and debris that the floods left behind.

Construction and home repair is also the biggest need in the Montana Flood Recovery effort. While the amount of destruction was significantly smaller with approximately 50 damaged homes, the need for volunteers is just as great.

There have only been 40 volunteers including two college mission teams since Nov. 2013 according to Dan Stewart, the state DR coordinator for Montana.

“We try to accommodate our volunteers by finding a job that fits them,” said Stewart. “We just want to work together with the crews and the families we’re working for and make sure that everyone goes away happy.”

This project is focused on the city of Havre as well as the Indian reservation at Fort Belknap. Stewart and his team are partnering with the tribal council on the reservation as well as a Native American ministry started by one of the tribal natives to repair the damaged homes. They expect to finish by summer 2015.

However, the main focus of all of the SBDR projects is not just repairing homes, but changing lives, according to Wilson.

“As an organization, we want to emphasize that the ministry to the family is more important than the work we do on their house,” said Wilson. “If a team can come in on a weekend and work through the week, even if they have to travel two days, they can make a significant impact in the life of a family.”

For more information on volunteering for the SBDR Montana Flood Recovery, contact Dan Stewart at 406-465-6097 or [email protected].

Southern Baptists have 82,000 trained volunteers–including chaplains–and 1,550 mobile units for feeding, chainsaw, mud-out, command, communication, childcare, shower, laundry, water purification, repair/rebuild and power generation. SBDR is one of the three largest mobilizers of trained disaster relief volunteers in the United States, along with the American Red Cross and The Salvation Army.

Kristen Camp writes for the North American Mission Board.