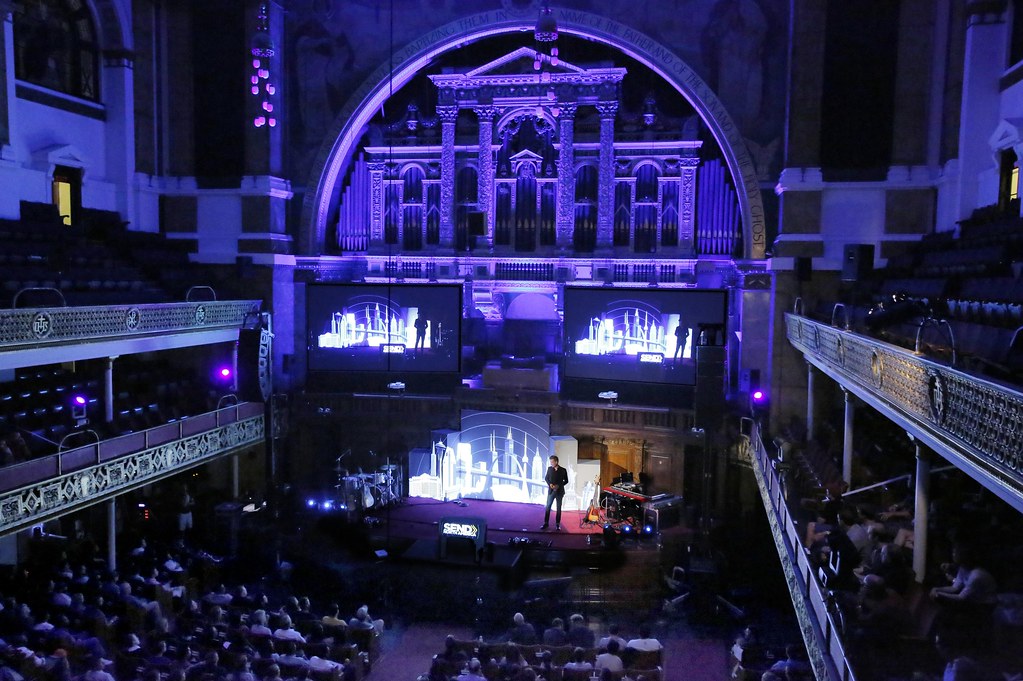 BOSTON – The fall tour of the North American Mission Board’s (NAMB) Send North America Experience debuted Sept. 8 in Boston. The event took place just blocks from sites where key happenings from the American Revolution occurred and in a venue rich with significant history all its own, Tremont Temple Baptist Church.

More than 1,100 attenders lined up around the block passing the final resting place of Paul Revere and dozens of other patriot’s headstones on their way to hear a message from David Platt, worship with the Passion Band and be challenged to live life on mission.

Aaron Coe, NAMB’s vice president for mobilization and marketing, recounted that the likes of D.L. Moody, Billy Sunday and Billy Graham have preached in senior pastor Denton Lotz’s pulpit, one in a line of prominent preachers who’ve led the nation’s first integrated congregation. Coe hinted that history is not finished with Tremont.

Coe led the gathering, made up of many Bostonians, and scores of people from around the northeast, to pray for the city, its leaders and for Jesus to be known in the region.

One of those Bostonians was Drew Dolan, a mechanical engineering student at Northeastern University. He was there with fiancée, Amada Bringhurst, to hear Platt and “explore what God is doing here in Boston and see how we can be a part.”

Platt, newly elected president of the International Mission Board, reminded the ethnically diverse gathering not to underestimate the power of God’s Spirit.

“I want to encourage you and exhort you that God has placed you here for a reason,” said Platt who remarked that some eight out of 10 residents of the northeast do not have a relationship with Christ. “What will you do with your moment?

“Don’t underestimate what God can do with ordinary people. God uses ordinary people with extraordinary power from the Spirit of God to accomplish His purposes. Every Christian has been commissioned to preach the gospel and empowered to share the truth. And never dilute the essence of the gospel,” said Platt, who used the example of the church founded at Antioch by ordinary followers of Christ [Acts 19:11].

“We all moved here from Oklahoma to be a part of what God is doing in Boston,” said Liner, speaking of his wife and friends. “Tonight was a great reminder that we have to continue to follow God in obedience. If you know you need to do something, you need to do it.”

Liner is a member of Charles River Church, planted by Curtis Cook. Cook and his team were hosts for the Boston tour stop. Cook also serves as city coordinator for Send North America: Boston.

Coe told the gathering, one of the largest missions events in the region in living memory, that one goal of the tour stop was to encourage believers and remind them they are not alone. That message was not lost on Amber Smith*.

“Do you really think there is hope for me?” asked Smith, who at 26 represented a trend toward a younger audience at the gathering. Smith is a former drug dealer who survived a rough childhood. “I’m so glad you came to Boston because now I know that people really do care about me.”

At the end of the night Drew Dolan had no question he was in the place God intended him to be. He knew from the opening song.

“I felt God speaking to me in the first worship set,” said Dolan. “It was to the point of becoming overcome with emotion, which doesn’t come easily to me. It was also incredible worshiping next to my fiancée. We felt shaken by the mission we are given for this city and this region.”

*Name changed due to the sensitive nature of Smith’s past.