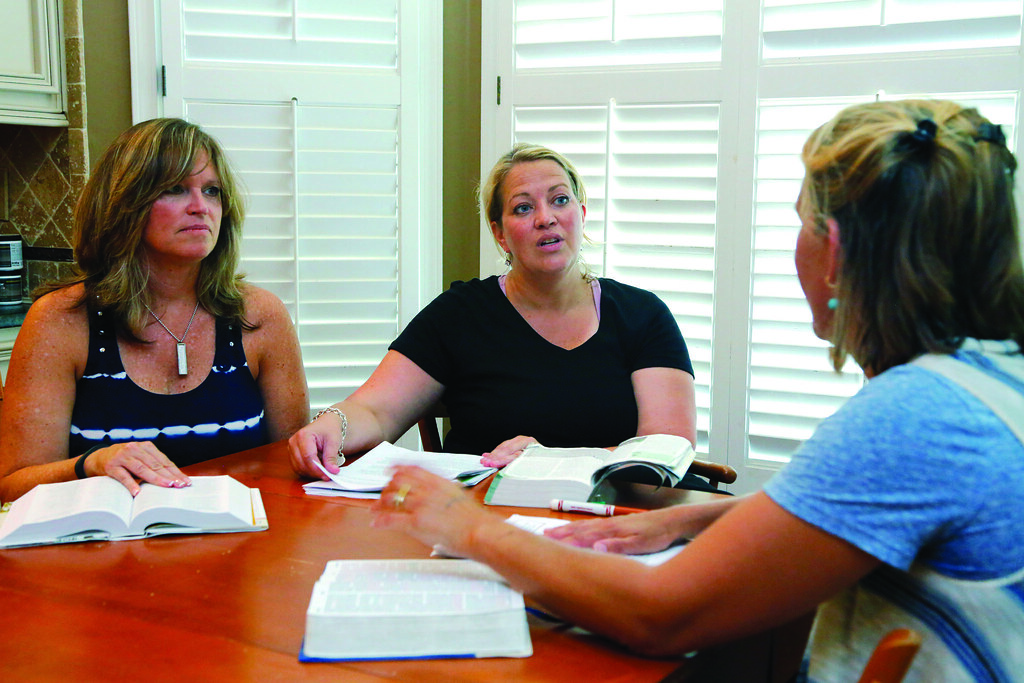 ALPHARETTA, Ga. – Stephanie Copenhaver is not entirely sure why they keep coming back or why they showed up in the first place. Apart from an invitation through her kids and their friends, there was nothing else that drew six students two years ago—midsummer, no less—to “learn about Jesus” in a four-week study in July.

The second week, 12 students showed up, and, by the end of the study, more than 30 students had been introduced to the Good Samaritan, the Armor of God, biblical values and Jesus, of whom most knew absolutely nothing.

“These weren’t churched kids, and yet most of them totally hung on every word,” says Copenhaver, a member of Northside Baptist Church in Roswell, Ga.

This all started the summer before youngest son, John’s, fifth-grade year as Copenhaver considered how privileged her kids were to know about the Bible and about Jesus. She wanted other kids to experience the life God intended for them.

“I called two other mothers and asked if they wanted to get kids together to study the Bible,” she says. “They said ‘sure’ and we told our kids to invite their friends.”

After a few planning meetings over lunch, the mothers had developed a few short lessons that would simply introduce unchurched, soon-to-be middle schoolers to the Bible, God and God’s plan for the people He created.

Last year the same kids returned, this time bringing some of their friends to learn about Jesus’ miracles in the Gospel of John.

As a result of this study, one student—Phillip Bruce—became a Christian and was baptized. “We got a cool-looking cross made for him. He wears it all the time,” says Copenhaver.

Two years into being with the group, Bruce says he is noticing a change in the way he thinks about life.

“I think twice about things now,” says Bruce. “I forgive more quickly, and now I go back and change my mind when I think about doing something foolish.”

Copenhaver’s evaluation of these experiences: “I stand at these meetings and I think, ‘I can’t believe He chose me to be a part of this.’”

Stephanie Copenhaver is quick to point out that she and the two other moms involved in this ministry—Pam Troutman and Jiska Van Ede—are not the heroes of this story.

They aren’t really able to explain it except to say God is working through their availability and willingness to live out His mission in everyday life.

“I think if you’re open to God, He will give you opportunities,” says Copenhaver. “A lot of people say they don’t feel like they know enough. Well, I don’t either. I’m not a pastor. I’ve never read through the entire Bible. But I think that if you love God and make yourself available then that’s all it takes. And honestly I’d be blown away if just five unchurched kids showed up.”

Troutman says observing what God is doing through the kids has surprised her.

“What strikes me most is how these kids, many who go to different schools, actually are praying and caring for each other,” says Troutman. “I don’t think any of us ever could have expected it to go like this.”

Van Ede says the group is able to give her boys and the others something she didn’t experience in her native Holland.

“I was the only one on my street to go to church,” she says. “[Biblical community] is the thing I never had as a kid growing up in Europe.”

In Life On Mission, Dustin Willis tells stories of laypeople impacting their spheres of influence with the gospel. Willis would say as believers join the everyday mission of God, they’re being the Church to their communities.

“The Christian life is a life on mission,” says Willis, a former church planter whose experiences are chronicled in Life On Mission, scheduled to release this fall through Moody Publishers.

Similarly, believers like Copenhaver who are living their lives on mission are experiencing amazing opportunities in their lifetimes and also recognizing that they are working for future generations as well.

With so many kids and only a few precious hours to impact them, Copenhaver says she may not be close to all the students, but she is concerned about their futures.

“I feel like these kids are still open and unjaded, but I also know they are exposed to so much at a very young age that will shape how they see the world,” says Copenhaver. “I feel like if we get them at a young age we can help shape future generations. And while I may not know all of them really well, I have a personal interest in where they spend eternity.”

This article originally appeared in the Fall 2014 edition of On Mission magazine. To learn more or subscribe, visit namb.net/onmission. See an online version of this story and accompanying video at https://www.sendnetwork.com/OMvideo.

To learn more about Life On Mission or to order resources, visit www.lifeonmissionbook.com.