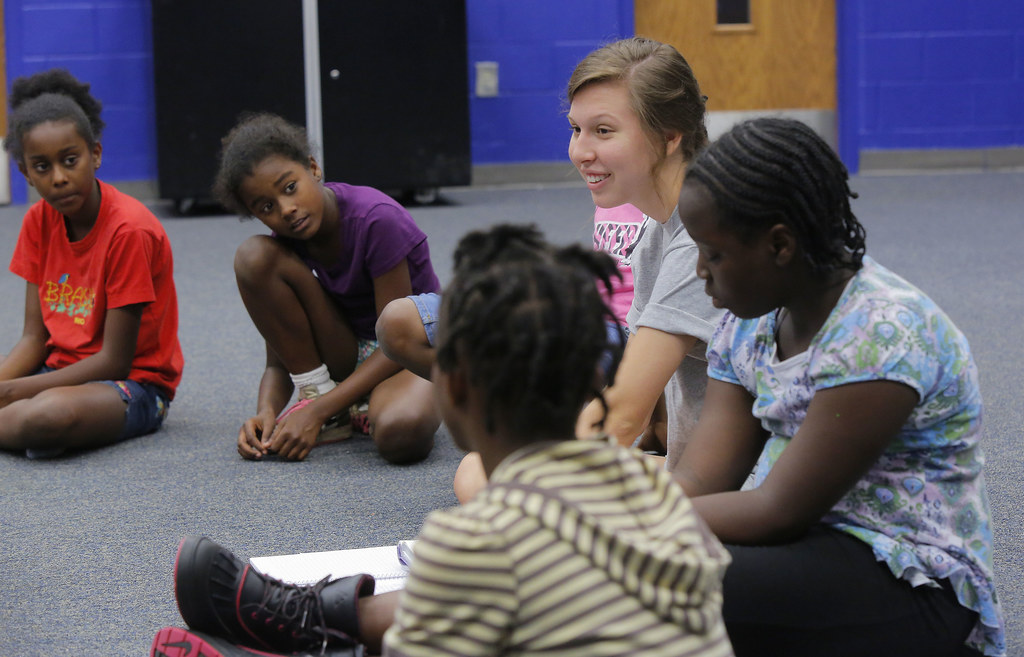 DECATUR, Ga.—Teenager Shelby DuBos sat around a circle with two other students from Cedar Crest Baptist Church in West Monroe, La., and a group of local Decatur elementary-age girls. After helping the them learn a few cheerleading moves, the Louisiana teenagers now focused on the most important reason they were in the Atlanta area—helping people learn more about Jesus.

“The Bible tells us that when we believe in [Jesus] it’s now our job to tell others about Him,” DuBos told the girls. “That’s kind of a hard task, isn’t it? It takes a lot of strength to tell people you don’t know—or even people you do know—what you believe in.”

DuBos should know. For the past two summers she has traveled to the Atlanta area with her Louisiana church to tell people about Jesus and help out the city’s church planters.

“The first day we got in there we started with the story of Creation,” said DuBos, who will be a high school senior in the fall and is sensing God’s call to international missions. “Most of them didn’t know the story of Creation when we got here and now they can tell the story of Jesus and Creation. It showed me that you don’t need to do foreign missions to go to a place where Jesus isn’t known.”

DeBos and the Cedar Crest team spent the week partnering with Atlanta-area church plant Connect Church to put on a sports clinic and share the Gospel with neighboring Decatur, Ga., kids. On Friday night volunteers invited the kids and their families to a block party and camp celebration—with food, games, scrimmages and live music.

Tez Andrews (@tezandrews), the Southern Baptist church planter who started Connect Church last year, came back home to the Atlanta area to start a church after attending seminary in Texas. Sports were such an effective outreach tool in the community that he started his ministry with a basketball league, which eventually gave birth to the church.

With no sending church to sponsor his ministry, Andrews has depended upon connections made through Send North America: Atlanta. He connected with Cedar Crest through a Catch the Vision tour in Atlanta last summer.

“When you are out on your own, you partner with NAMB and you have partner churches like Cedar Crest come in, they really become surrogate mother churches,” Andrews said. “So much so that when we’re going through difficulties, I’ve called Cedar Crest’s mission pastor and reached out for help.”

Southern Baptist volunteers have enhanced the ministries of a variety of church plants throughout North America this summer. For many church plants in places with few Christians, mission teams from established churches provide much-needed help for outreach projects.

Kevin Cabe (@KevinCabe), a church planting missionary and associate pastor with Cornerstone Church at Bay Ridge in Brooklyn, N.Y., hosted 130 church volunteers during a CityUprising outreach event in June. With the help of the volunteers, the church put on summer celebration events, did various park and community cleanup work and shared the Gospel in the community.

“Their help was tremendous to us, and because of them, we were able to connect with [more than] 1,000 people and introduce them to Cornerstone Church,” Cabe said.

Volunteers from Buck Creek Baptist Church in Calhoun, Ky., took a June trip to Cleveland. Buck Creek has participated in several ministry projects with Cleveland planters during the past three summers, including cleanup and building projects, putting on a sports camp and outreach to the city’s homeless.

“Our church has a heart for service,” said Thomas Webb, Buck Creek’s pastor. “We have a group out right now helping with disaster relief out west, helping with the fires and things of that nature. That is the makeup of our people. The more they serve there, the more they come back and want to serve here.”

To find out how your church can get involved in mission trips to one of the 32 Send North America cities, visit namb.net/mobilize-me.