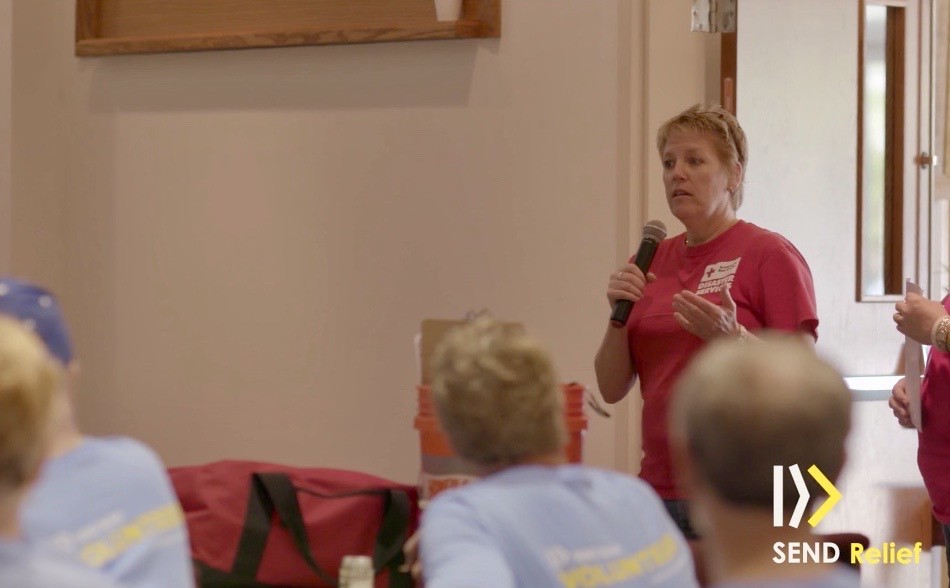 WEST CHESTER, Ohio – When Dan Helms volunteered to help install a smoke detector in a West Chester home, he thought it was weird. Never had the teenager helped someone without expecting something in return. Now that he has made a profession of faith in Christ and has been discipled by Lakota Hills Baptist Church (LHBC), he considers serving others in the name of Jesus “the good life.”

“I really believe people who know Jesus, when they’re given an opportunity to serve their community in an organized fashion, I think they just jump at it,” said LHBC Lead Pastor Travis Smalley. “It’s built within the DNA of our church; it’s in everything that we do.”

On April 15 of this year, Helms was one of about 70 volunteers from LHBC who participated in a Home Fire Campaign designed to install smoke detectors in residences lacking a warning system. The church partnered with the West Chester Fire and Rescue Department and the American Red Cross (ARC).

“We would never be able to reach as many homes as we did without this partnership,” said Capt. Scott Brooks, West Chester’s Fire and Rescue chief. “The partnership between Lakota Hills and the American Red Cross is really important to the West Chester Fire Department.”

ARC responds nationwide to about 64,000 disasters annually, and most are house fires. Beginning in 2014, ARC initiated the Home Fire Campaign with the goal of reducing death and injury from fires 25 percent by 2020. ARC estimates that the Home Fire Campaign has saved 235 lives since its inception. They provide the volunteer-installed smoke detectors.

“There are fires every day and working smoke detectors are the number one reason people get out of their homes alive,” said ARC Disaster Program Manager Lisa Herzog, who described working with LHBC as “fabulous.”

“The Home Fire Campaign is a great way for churches to meet practical needs in the community and build a bridge to share the gospel,” Melber said.

Community service has long been a major component of LHBC’s community ministry, so the Home Fire Campaign fit what they were already doing to show the gospel through service. The congregation is multigenerational and multiethnic located in a suburb north of Cincinnati, and it is starting multiple churches across Greater Cincinnati.

On the day of the Home Fire Campaign initiative, volunteers visited more than 500 homes in a community near the 18-acre West Chester campus of the Islamic Center of Greater Cincinnati. Smalley said the volunteer’s best reception was from Muslim families.

The 70 volunteers canvassed neighborhoods in small groups ready to install a smoke detector at a family’s request. One lesson learned by LHBC’s first Home Fire Campaign outreach is that the residents more readily received teams that had ethnic or senior adult members.

Hillary Cintron serves LHBC as its preschool and outreach director. She was the project coordinator for the Home Fire Campaign.

“The community responded positively to the Home Fire Campaign,” Cintron said. “There were countless quality connections and divine appointments with homeowners.”

Among those “divine appointments,” was an encounter between volunteers and a war veteran who had recently lost his wife. He didn’t need smoke detectors, but he needed company and listening ears. He welcomed the volunteers praying for him.

“It was such a neat example of how God used the Home Fire Campaign to open doors far beyond needs for just smoke detectors,” Cintron said.

LHBC sponsors 30 to 50 community events annually, mostly connected to local schools. Their service to the schools opened the door to serve the immigrant and international community with free English As a Second Language (ESL) classes, citizenship classes, math tutoring and free hot meals for the ESL students and families. Local schools now regularly refer parents of international students to their ESL classes.

“Through the ESL ministry, God has used us to touch well over 30 different people groups just last year,” Smalley said. “We will run between 130 and 180 ESL students and their family members on a weekly basis during the school year and feed about 100 people on a weekly basis for a dinner.”

Having established new relationships with their local ARC and the West Chester Fire Department, Smalley hopes to partner with them in other community service initiatives. LHBC is already planning to repeat the Home Fire Campaign in the fall.

Churches desiring to serve their community with a Home Fire Campaign can visit https://www.namb.net/send-relief/home-fire-campaign for more information.

Jim Burton is a photojournalist and writer living in Atlanta. He formerly worked 25 years for the North American Mission Board. Much of that time he was the Volunteer Mobilization Team director, which included national oversight of Southern Baptist Disaster Relief.