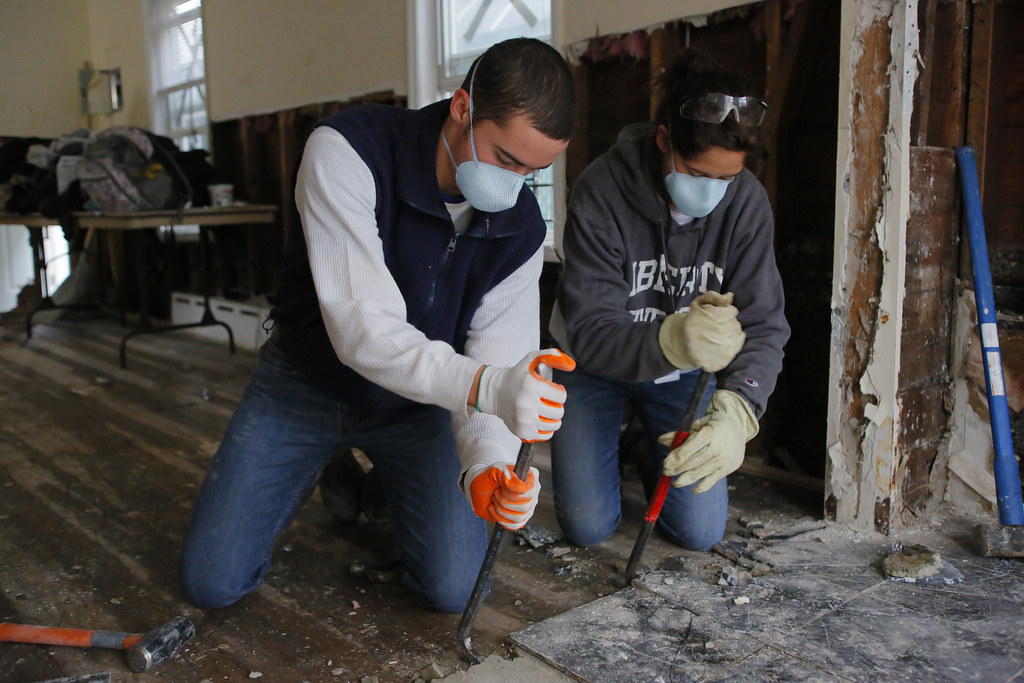 CENTRAL ISLIP, N.Y. – As the two-year anniversary of Superstorm Sandy approaches, Southern Baptists continue to bring help, healing and hope to hundreds of people in New York and New Jersey affected by the Oct. 29, 2012 storm.

“For so many people, life has gone on but there are pockets of individuals who still have great needs,” said Mickey Caison, Southern Baptist Disaster Relief (SBDR) recovery coordinator and director for Sandy Rebuild. The initiative is a partnership that includes the North American Mission Board (NAMB) and North Carolina Baptist Men working in cooperation with the Baptist Convention of New York, Metro New York Baptist Association, New Jersey Net and local churches throughout North America to repair and help restore communities, not only physically but also spiritually, said Caison.

Almost two years later with 11, 278 volunteers giving $14 million in volunteer hours to assist 3,160 homeowners, needs are still being met, he said. Caison stresses that while things may appear back to normal on the outside many residents are living in damaged homes in need of repair.

One of the brightest spots for the entire rebuild efforts has been the Christmas and spring break participation of college students. Caison is hopeful more students will return to the work as winter breaks begin later this year.

“What resonates with the community is that we are still here,” said Bill Johnson,

Sandy Rebuild project coordinator. “They ask us, ‘Why are you still here?’”

Johnson said recently within one week, 20 additional residents have requested help. Most are elderly, widows or widowers living alone in deteriorated homes. They did not seek help early on through various programs and fell through the cracks, he said.

Johnson and his wife, Donna, have served with SBDR since the day after Sandy struck. The storm surge dumped up to eight feet of water in some areas, which damaged thousands of homes along the New York and New Jersey coasts. The couple are members of Liberty Missionary Baptist Church in Cannonsburg, Ky. Johnson said volunteers are needed for construction and general home repair, from hanging sheetrock to painting and cleaning. Team leaders and cooks are also in demand.

Recently, the American Red Cross and the New York Institute of Technology helped make resources available for the work to continue through August 2015. Community leaders upon learning that SBDR was planning to leave at year’s end requested the team to stay on, said Fritz Wilson, executive director for Disaster Relief at NAMB.

“It’s an affirmation the effectiveness of the SBDR organization in doing this kind of work,” said Wilson. “Southern Baptists approach disaster relief service as a marathon not a sprint.”

Wilson credits the volunteers with not only their level of skill but with “the heart and passion they bring to helping families get back into their homes.”

As the community got to know volunteers, Caison said it has been receptive. “One of the comments I keep hearing over and over here is, ‘Your volunteers are so loving and kind.’”

Caison said the return of college student volunteers is always a high point on the project. Over two Christmas and two spring breaks, 1,200 collegiate volunteers served, living in a tent city on Staten Island. The students who came from 30 states and who served with 105 teams from 93 campuses or churches logged 70,417 volunteer hours with a value of $1.4 million. The students also witnessed 26 professions of faith.

SBDR plans for the return of college students in December and again in the spring based at New York Institute of Technology. Students interested in volunteering with Sandy Rebuild can learn more at namb.net/sandy

Caison said the way in which the students and seasoned SBDR volunteers worked together was impressive.  He says he is encouraged also by the commitment of NAMB president Kevin Ezell to involve college students and support those relationships.

“We are seeing God at work here. We are looking forward to the coming year and how He is going to use the SBDR ministry to touch the lives and hearts of many people,” said Caison.

Laura Sikes, an Alexandria, Va., based freelance writer and photographer, writes for the North American Mission Board.