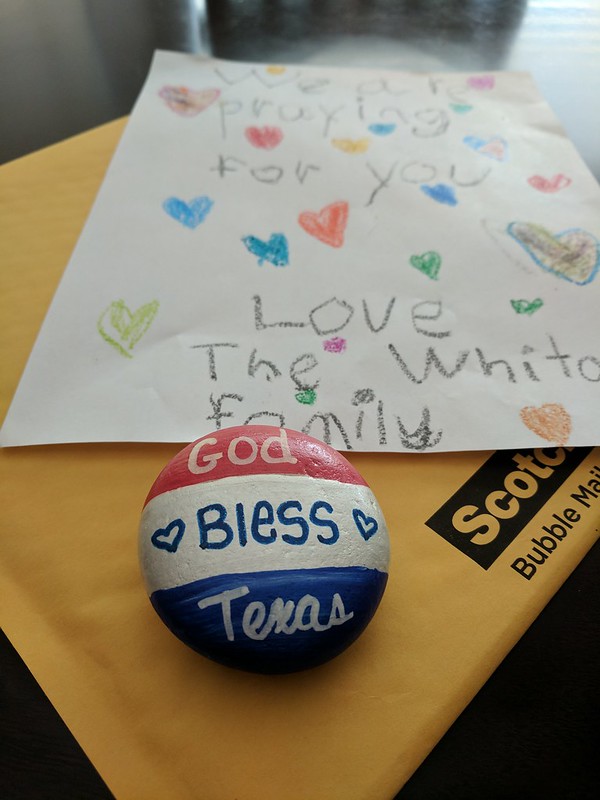 ALPHARETTA (BP) Hurricane Harvey devastated thousands of families and caused billions of dollars in damage in Texas. Many lost their homes, their careers and even their lives; however, ordinary citizens across the United States have taken initiative to help with relief efforts.

The Whitaker family in Tallahassee, Fla., began selling lemonade and painted rocks to raise awareness and support for Hurricane Harvey relief. The family felt a special connection to survivors in Texas because last year their home was hit by Hurricane Hermine. Though the storm was less destructive, the Whitakers still remember the damage that ravaged their city, and they were compelled to serve and to love the victims—a concept reinforced in their house and church.

When Irma threatened Florida, the Whitakers were understandably nervous. They were among the millions who lost power. Thankfully, their home suffered very little damage, and their power was eventually restored.

The idea for a fundraiser began with 6-year-old Ali Whitaker, who wanted to create a lemonade stand to raise support. To draw attention, the Whitakers painted messages such as “Pray 4 Texas” and #TallyLovesTX on rocks and asked those who purchased the rocks to leave them throughout their community. With their fundraiser in motion and saturated in prayer, the Whitakers started with a goal of $100, which has now been greatly exceeded. The family has raised $1,470 in just a few days. They now hope to raise $2,000.

The Whitakers have decided to donate through Send Relief with the North American Mission Board (NAMB) because 100% of all donated funds are given directly to relief efforts. The Whitakers also saw firsthand the financial and spiritual support that Send Relief brings to cities such as Tallahassee after disaster strikes.

“In addition to meeting the physical needs of those they serve, Send Relief also brings the love of Jesus,” said Jenny Whitaker. “We wanted to not just raise money for the people in Houston, but we want to show our kids that the ultimate goal is to glorify God and share the love of Jesus. Donating to Send Relief guaranteed that our money would help do both.”

The Whitaker family’s ultimate goal for their fundraiser is to help the victims physically and spiritually.

“I just hope that this will help the people in Texas get the things they need and hear about Jesus. That will make me happy,” said Ali.

Across the nation, a California native is also using her talents to help with relief efforts. Debby Bratton, a calligrapher, is selling hand-lettered prints to raise support.

Bratton felt compelled to fundraise after viewing the live news feed of the hurricane from her work desk. She desired to help, even if she could not physically volunteer in Texas herself. Bratton felt that the Lord was calling her to use her business, Hand Lettered Truth, to create limited-edition prints of Ephesians 2:10. Bratton specifically chose this verse because she believes that it is the church’s responsibility to rise to the occasion and to love and serve others, especially during times of disaster.

“I looked at Send Relief’s website, read some of the articles and saw the videos, which made it clear that Send Relief is on the front lines helping with relief efforts,” said Bratton. “Knowing that 100% of every dollar given is going directly to aid relief efforts, I felt confident that the organization was a good choice.”

Bratton hopes that her fundraiser will encourage people to work together to achieve a common goal.

“I love this quote by Hellen Keller ‘Alone we can do so little; together we can do so much,’” said Bratton. “I love it because it is so true, and it’s what I’m reminded of each time someone purchases a print from this fundraiser. It takes people that care to make a fundraiser work. I couldn’t do this alone; so I’m thankful for each person that has gotten involved through Hand Lettered Truth.”

Alexandra Toy writes for the North American Mission Board.