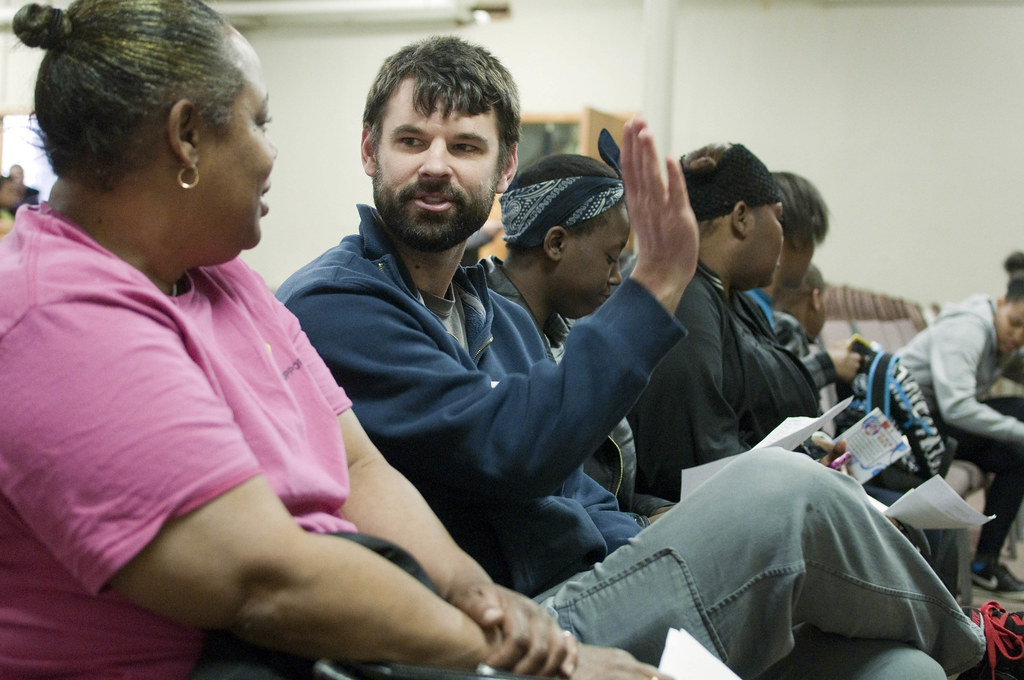 KANSAS CITY, Mo. – On Easter Sunday the community surrounding Bales Avenue Community Church in Kansas City, Mo., came together to celebrate two resurrections. The first and most important was Jesus’ resurrection from the grave. The second—the church’s new beginning after decades of decline—visibly illustrated the first.

“The neighborhood has changed and the world has changed, which represents sin all around us within the city,” said Jason Dawson, the pastor of Bales Avenue. “One of the primary reasons for launching again on ‘resurrection morning’ as a backdrop to our being here as Bales Avenue Community Church, is the demonstration of Christ’s resurrection from the dead!

“We hope we’ve demonstrated Christ in a real and authentic way,” said Dawson. “What a great parallel. What was dead is now alive. This is the message of the gospel that the power of God is demonstrated as His people are reconciled to God.”

The new church is the result of a merger between Bales Avenue Baptist Church, which started in 1891, and a young church plant named Living Faith. The Easter Sunday re-launch took place in the former Bales Avenue Baptist building on the corner of Kansas City’s Bales Ave. and E. 12th St. More than 100 people attended the service, where Dawson preached on “Jesus is Alive in the City.”

Like many other churches throughout North America, the ministry context at Bales Avenue has changed drastically since it opened its doors. Membership grew to more than 1,000 by 1901, making it the second largest church in the Missouri Baptist Convention.

The church peaked in size at more than 1,300 in the 1950s, but post World War II demographic shifts transformed the once thriving middle-class, culturally monolithic neighborhood to a ethnically diverse, low-income neighborhood. From 1990 to 2010, the foreign-born population of the area around Bales Avenue Baptist grew from 3 percent to more than 35 percent of the total population. The medium household income is just $21,089—less than half of the nation’s average.

By the winter of 2013, only 50 to 60 people attended the church each week. And the vast majority of those regular attendees had moved to the suburbs, 30 to 45 minutes from the neighborhood surrounding the church.

“This made ministry to the neighborhood difficult,” Dawson said. “If you saw people become born again—even on a Sunday morning—it’s hard to spend time with them and disciple them when you live 40 minutes away.”

As Bales Avenue struggled to discover its place in northeast Kansas City, Dawson was gaining a love for a similar urban core neighborhood. While they were members of a suburban church in nearby Independence, Mo., a family who lived in the urban core of northeast Kansas City took Dawson and his wife, Brandy, under their wings and mentored them. Every week the Dawsons came to the city for Bible study.

“I speak Spanish,” Dawson said. “I’ve lived in Nicaragua and Mexico. God has given me the ability to speak the language for a reason—to share Christ in that context—so when I had the opportunity to move down to that neighborhood, I took it.”

After moving to the urban core in 2003, Dawson and his wife spent the next six years sharing their faith regularly in the neighborhood, as they continued to be discipled. But bringing people they reached with the gospel to their suburban church didn’t work.

“It just kind of broke my heart to see this part of the city without a church,” Dawson said. “There were Jehovah’s Witnesses and Muslims, but at that time Christianity was very, very void.”

So in 2010 the Dawsons and four other couples started Living Faith, a new church plant in northeast Kansas City. By the end of 2013, the church had gradually grown to around 100 in average attendance. Thanks to Kansas City pastor John Mark Clifton, Dawson learned that Bales Avenue might be open to joining forces. Last December the two agreed to became one.

As the new congregation—now called Bales Avenue Community Church—moved toward the Easter launch, they began to re-introduce themselves to the community through events like a marriage conference held at the church and an eyeglasses giveaway.

Since Dawson and several other members of Living Faith are bilingual, the church is now more equipped to share Christ in its increasingly multicultural neighborhood. For long-time members, that’s one of the most exciting parts of the church’s new transition.

“We really lacked the ability to communicate in the languages of the people coming into the neighborhood,” said Mary Royster, who has been attending Bales Avenue since 1982 but now lives 45 minutes away. “For the last 10 years those languages—the ethnic populations—have grown really large. With this new group that we’ve partnered with, they speak those languages and they are more able to communicate to people in the neighborhood.”

A partnership with Midwestern Baptist Theological Seminary (MBTS) has made the church a training center for new church leaders, bringing new life and activity to the church property during the week. Since Dawson works full-time in a secular job, he shares preaching duties with another leader in the church, Vince Payne. An MBTS student also preaches once a month.

“We’ve got a lot of new possibilities here,” said Heidi Huesing, who was a part of Living Faith before it merged with Bales Avenue. “There are a lot of needs here, but a lot of opportunities to see God at work. I believe God is going to do something great through this church.”