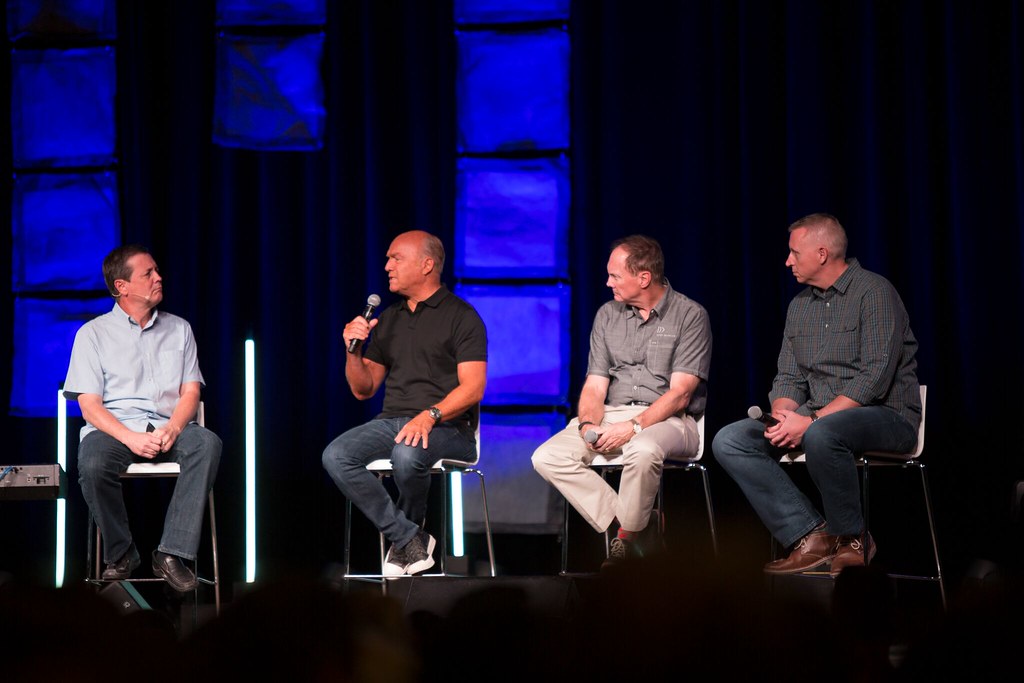 A full-capacity audience gathered at the Phoenix Convention Center Monday, June 11, for a discussion about evangelism at the North American Mission Board’s (NAMB) 2017 Send Luncheon which coincided with the Southern Baptist Convention Pastors’ Conference.

“NAMB exists to come alongside churches and help them be on mission,” NAMB president Kevin Ezell told pastors. “The mission of sharing the gospel of Jesus Christ. To push back lostness in North America. To see that every man, woman, boy and girl can hear the gospel. Everything we do is about evangelism. We as a convention need to focus on having gospel conversations.”

Ezell shared some sobering statistics based on an analysis of 2015 Annual Church Profile numbers. Eight percent of SBC churches, he said, baptized nine people or fewer. Fifty percent of churches baptized two or fewer, and 25 percent baptized none.

Ezell then invited Vance Pitman, Greg Laurie and James Merritt to the stage to discuss their experience sharing the gospel and leading others to do the same. Each man stressed how crucial evangelism is to the survival of the church, and they challenged pastors to lead by example in their own lives by intentionally and regularly having gospel conversations.

Greg Laurie, Senior Pastor of Harvest Christian Fellowship in Riverside, Ca., began the conversation by explaining how he motivates his church staff and members to share their faith.

“If you want to start a fire in the pews, it has to start in the pulpit,” Laurie said. “Evangelize or fossilize. New believers are the lifeblood of the church. If you show me a church that does not have a constant flow of new believers coming in, then I will show you a church that’s stagnate.””

Merritt, lead pastor of Cross Pointe Church in Duluth, Ga. added: “Unless you are a pastor in the Sahara Desert, by yourself, there is no excuse for baptizing nobody. The gospel is still a fire that can melt the coldest heart. It is still a rock that can break the hardest heart.””

NAMB ambassador and pastor of Hope Church, Las Vegas, Vance Pitman shared his experience with evangelism as a church planter.

“What changed for me in the arena of evangelism was moving to Las Vegas to plant a church,”” Pitman shared. “”When I moved to Las Vegas, there was no church. I didn’t have a choice but to build relationships with people in the city.”

Pitman said it was then that he became more active in meeting lost people, cultivating gospel conversations with them, and building relationships with people in the city. He addressed a problem he said is common among Baptist churches today: Members are only surrounding themselves with fellow church members. Pitman suggested restructuring the ministry to allow more time and opportunities for members to build relationships with people outside the walls of their congregation.

Pitman then introduced a video of Martin Haghani, a church planter from his church who excels in evangelistic work. A former Muslim, Haghani has devoted his life to reaching out to the Islamic community in Las Vegas in order to share the gospel and the hope of Jesus. In 2015, he led 26 Muslims to Christ, and in 2016, his church baptized 54 more.

To conclude the event, Ezell explained that the purpose for planting churches is evangelism, and he introduced a video featuring Justin Haynes as the embodiment of this mission. Haynes is a church planter that moved to New Orleans to start a church in a community there.

“I believe that prayer is one of our most powerful tools that we have,” Haynes stated in the video. About six months ago, NAMB contacted Haynes and asked him if he would be willing to be featured in its annual missionary prayer calendar, which is distributed through SBC churches. Four months later, Haynes was diagnosed with cancer on the same week he appeared on the prayer calendar.

“Knowing that there are thousands praying for the mission to move forward just makes me keep going,”” Haynes explained. “We are in a broken world, and I only know one person that can fix that, and it’s the one that’s fixing me.”

After the video, Haynes, his wife, and his four children joined Ezell on stage and were met with a standing ovation from the audience. Once again, they stressed how much they have appreciated the SBC’s support and prayer through the challenges they have encountered.

The luncheon’s conclusion came when Ezell told the Haynes family that through private donations, NAMB would be covering the out-of-pocket medical expenses the Haynes family have incurred during his cancer treatments. For the closing benediction, Ezell invited Merritt back to the stage to pray for Haynes and his family.

Daryn Sinclair writes for the North American Mission Board.