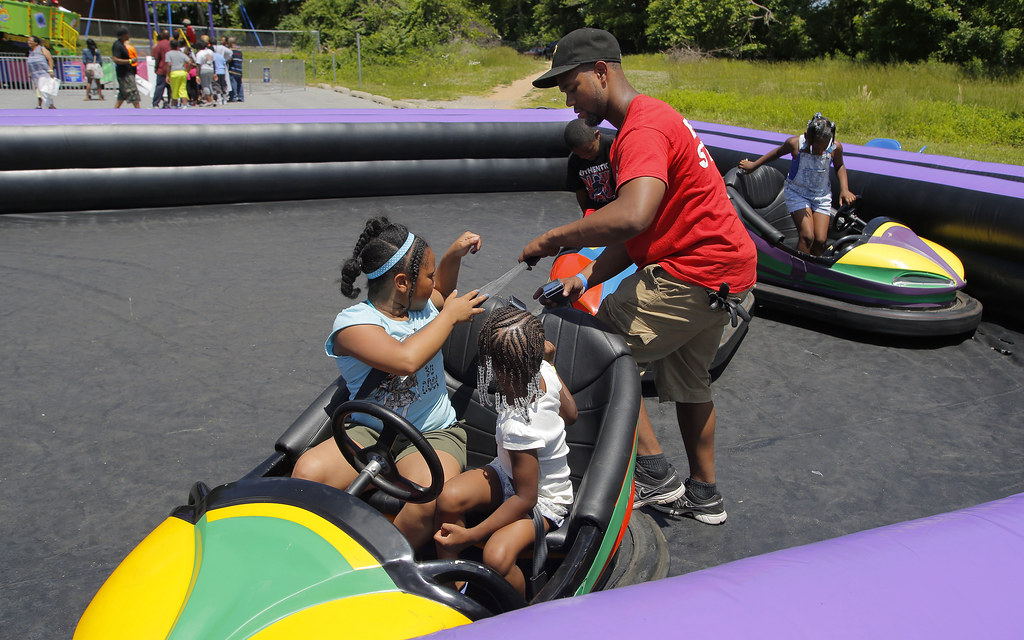 BALTIMORE, Md. – Dante Carter has compassion for the broken lives he sees around him. Brokenness would be a fair description for Baltimore’s Armistead Gardens.

Carter, youth pastor at Northeast Baptist Church (NBC) in the heart of the Armistead Gardens community, says he wanted Crossover Baltimore to communicate to the hurting people he encounters.

“There’s a lot of hurt and pain in Armistead Gardens,” said Carter. “We want to give people an opportunity to hear the gospel preached and to experience the love of Christ through the people of our church.”

Northeast Baptist was one of 36 Baltimore-area Baptist churches that joined arms with almost 2,000 volunteers from 18 states and Canada to serve the community and share Christ with Baltimore residents during Crossover. The event preceded the beginning of the 2014 Southern Baptist Convention Annual Meeting taking place June 10-11 in the city.

One witness of the Strength Team’s NBC presentation had more than a passing interest. Crossover Baltimore Mobilization and Logistics Director Cindy Irizarry was seated next to a mother and her young son.

“When he finished his testimony and gospel presentation, the Strength Team member asked anyone who wanted to receive Christ to raise a hand,” said Irizarry. “The mom raised her hand. I leaned over and said, ‘Are you asking Jesus to be your savior?’ She said, ‘Yes.’ She looked down at her son and he raised his hand, too.”

Mother and son joined six other people from the audience who came forward as NBC pastor Bill Higgins lead the group in prayer. During NBC’s week of community outreach another nine people came to faith in Christ.

“It was glorious to see so many of our church members and pastors so enthusiastic,” said Irizarry. “You could see the hope and the excitement in their faces. To see volunteers, both local and from everywhere, come to serve–it was exciting.”

At many of the Crossover Baltimore sites seminary students were putting into practice what they had received training for earlier in the week–the 3 Circles: Life Conversation Guide. The guide is a new resource from the North American Mission Board. An app version can be found at sendnetwork.com or namb.net/3circles.

“It was a marvelous day on so many fronts,” said Embrace Baltimore Executive Director Bob Mackey. “One of my favorite highlights this week is having over 200 students from six seminaries volunteering the equivalent man hours of one person working 5.4 years full-time in Baltimore and sharing Christ with compassion, grace and determination.”

One of the venues where seminary students served was the Baptist Convention of Maryland/Delaware’s Collegiate Ministry beach volleyball tournament held at Baltimore’s Inner Harbor.

John Kovacs, who pastors the 6-year-old The Light Church in Baltimore, said he hopes Crossover events like the volleyball tournament will provide visibility for local churches.

“I think the most significant thing this kind of ministry provides for us is presence,” Kovacs said. “To be out and meeting people is great. I just got to connect with two guys today who didn’t know about our church.”

Jeanine Carter, a member of First Baptist Church Dallas, had her second opportunity of the day to lead someone to Christ while helping at the volleyball event. A woman from Spain and her boyfriend there inquired about a local church. As Carter was talking to the couple, she discovered the woman was a Christian but her boyfriend was not. Carter shared the gospel and he prayed to receive Christ. Earlier in the day, Carter had led a hotel staff member to faith in Christ.

“We as Christians should be witnessing to those who are not,” Carter said.

After being provided with everything from free groceries to free clothing, lunch and more, one particular Baltimore man had a natural next question—why? Pastor Hal Kitchings (@halkitchings), who planted The Bridge Church in Memphis, Tenn., was ready with an answer.

“I had the new [3 Circles: Life Conversation Guide] in my pocket and I just pulled it out,” Kitchings said. “I went to some of the verses, because I was basically at the end. He was ready to listen. He had come from a difficult background.”

Kitchings then prayed with the man and connected him to Captivate. Community Day, staffed by more than 300 volunteers from Georgia and Baltimore, included gifts of groceries and clothing, light medical and dental care, entertainment and lunch. It is one of five such events that Southern Baptists from South Georgia are spearheading in major cities around North America. The first of those events—all designed to serve the community and aid new church plants—was held in Memphis in partnership with Kitching’s church in the spring.

“God has given me so much,” said 92-year-old volunteer Jeanette Coody, of First Baptist Church of Valdosta, Ga. “I can never repay Him for all He has done for me, but I come out and do things like this to express my gratitude.”

Saturday was marked on Cornelius Woodson’s calendar. It brought the chance to get out of the house and practice his favorite sport. Woodson, 7, of Parkville, Md., took third base at Hamilton Little League Park.

“My mom signed me up,” said the Little League veteran. “I just wanted to get a workout. It’s better to practice out here than it is to practice at my house.”

Cornelius joined dozens of other children at the park where Parkville Baptist Church (PBC) hosted a baseball skills clinic in partnership with First Baptist Church of Monroe, Va.

“This is really the first time our church has reached out to this community in this way,” said PBC pastor Kurt Wesolowski, who began leading the church eight months ago.

Stephen Arrington, outreach pastor of First Baptist Monroe, said the day’s events are important for the mission of local churches.

“I’ve learned it doesn’t matter how a community feels about you or what they say about you,” said Arrington. “Our job is to be a positive influence and to love and serve this community.”

Infinity Church Baltimore and Southeastern Baptist Theological Seminary students hosted a community fair outreach at The League, a non-profit organization in the city. The event included everything from health screenings to job assistance to food for residents of the surrounding low-income community.

“Everything you learned in the classroom makes you aware of what you can face, but coming here showed me you have to let the Holy Spirit guide you,” said Danny Pilkington, an undergraduate student at Southeastern who led the team helping Infinity Church throughout the week. “You can come up with all kinds of good arguments [for your faith], but sometimes all a person wants is a hug or a person to talk to, someone to cry with.”

“We didn’t just want to draw people to our church plant,” Dickson said. “We were asking, ‘What do our people really need?’ What we find is that a lot of them are suffering because they just don’t have the resources.”

Similarly, in Randallsville, Md., members of Colonial Hills Baptist Church and dozens of volunteers served and shared the love of Christ with the surrounding community.

“I’m out here because this community needs to know that we are in this community and that we care about the people here,” said Colonial Hills member Will McClamb.

“The long-term ripple effect of Crossover on our region will last for a life-time for all of those who met Christ this week and alter the missionary focus of so many of our churches to engage their neighbors,” said Bob Mackey who credited the compassion and cooperation “among so many Southern Baptists who fill the ranks of our seminaries, churches, colleges, state conventions, associations and SBC entities.”