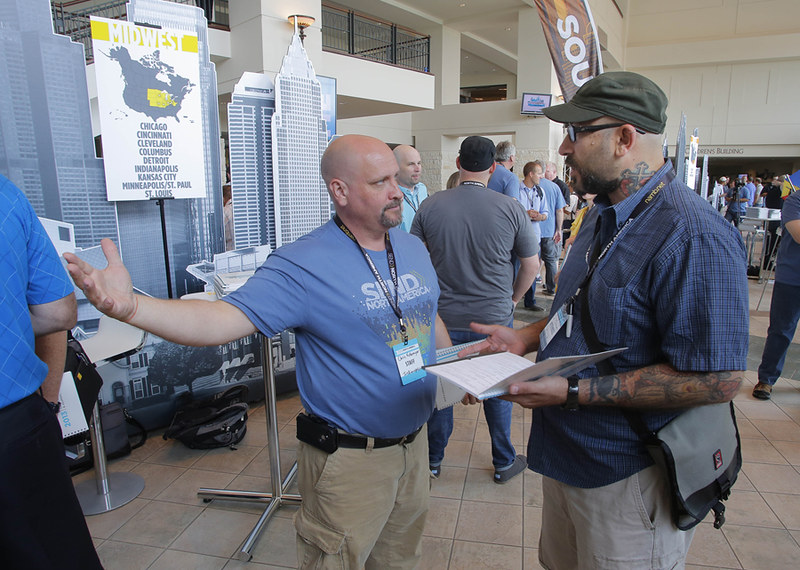 DALLAS – When he listed ways to strengthen his skills as a church planter, Dominic Chausse hadn’t considered one of them to be broomstick hockey skills.

But surrounded by several dozen fellow church planters and spouses (and even a few kids) on the ice rink of a Dallas mall, the Montreal-born church planter quickly added it to his repertoire.

While the Texas heat blazed in the 90s outside, church planters hosted by the Send North America Support Network clad gloves and toboggans and fought over an orange ball they knocked around for an intense few hours of somewhat controlled chaos.

Chausse said that the short while he and wife, Solange, have been part of the Network has made their transition into church planting much more enjoyable.

“The support has been amazing,” he said. “My wife and I started the process of planting a church last year. I had a two-employee construction company and was making some good money. Making the move to ministry was hard because we had to readjust our budget and standard of living.

“The encouragement means so much. Especially for my wife because every time she receives something in the mail it makes her day and reminds us that we are not alone in this.”

Hosting more than 100 church planters and spouses in the days leading up to and during the conference provided a much-needed respite while giving them key opportunities for gathering partners, support and training.

The 2013 Send North America Conference included a track specifically designed for church planters and also provided training as well as scheduled networking time for connecting with pastors and other church leaders who might serve as future partners.

“I needed to do some networking in order for our launch to happen this October,” said Chausse. “God blessed us with three potential partners that are the result of us meeting during this conference.

“The conference content was amazing, too. We needed this kind of teaching. [Jim] Cymbala’s talk especially made me repent and love God deeper.”

The Send North America Support Network led by Director of Church Planter Relations, Micah Millican, is a ministry of NAMB that seeks to develop brotherhood among planters through blessing and encouraging them and their families.  The network is for lead planters, who believe in the Baptist Faith and Message 2000, and whose church plants are within 5 years of age from the date of public launch.

“We are here simply to support church planters,” said Millican. “They are on the frontlines of ministry, and we want them to know they are not fighting in the battle alone. We love them and have their backs!”