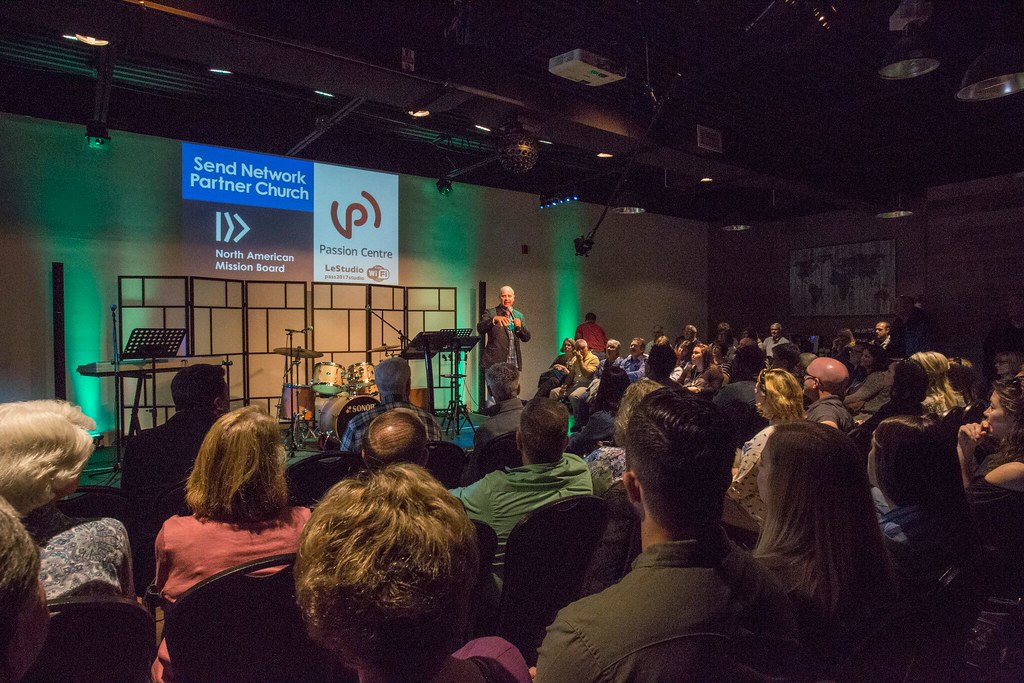 MONTREAL, QC—A celebration has been underway in Montreal. The year 2017 marks the 375th anniversary of the city’s founding, and the streets have been filled with festivals and events commemorating the occasion.

While many in the city have been celebrating the birth of what would become an island metropolis, North American Mission Board (NAMB) trustees visited Montreal in the midst of a different celebration.

Over the last few years, hundreds of people have been coming to faith in Jesus Christ as a result of the faithful ministry of church planting missionaries laboring in one of the most secular cities in the world.

Montreal is one of the 32 Send Cities in NAMB’s Send Network for church planting, and the city used to be known as a place where church plants go to die. The city practically became a spiritual ghost town after residents walked away from the Catholic church in the 1960s and 1970s. The church had controlled virtually every aspect of life including school, work, government and healthcare.

Many of the ornate basilicas and cathedrals now serve as mausoleums rather than hubs for ministry—transformed into tourist attractions, restaurants and even a hospital.

As NAMB trustees traveled around the city, they could not help but take note of the spiritual darkness. “It opens your eyes to the reality of the need for missionaries, church planters and evangelism,” said first-year trustee Rob Crow of First Baptist Church Diamond, Mo.

The light that had been seemingly squeezed out, however, has started seeping in once again.

“About 99 percent of the population in Montreal is lost and in great need,” said James Copeland, pastor and church planting missionary at Renaissance Church, “but we have been meeting people who are walking with the Lord and who are hungry for the Lord.”

There is a sense that the secular culture may be taking its toll after decades of implementation. The people, while cautious and careful around Christianity, seem to be developing a taste for the truths found in “the faith that was delivered to the saints once for all.”

Nearly every day, church planting missionaries see small victories in the city. The ground can be so hard that it can take months of talking with someone who attends one of the gatherings before they truly understand the gospel. Yet, David Pothier, pastor of La Chappelle, also recounts stories of nearly immediate life change.

Pothier recounted the story to trustees of an ex-Navy Seal physical trainer at a gym near their church office who, after visiting a La Chappelle service, experienced the Lord and put his faith in Christ. Now, he trains people in his gym while blaring worship music.

La Chappelle has been one of Montréal’s greatest stories. Originally planted in 2013, it has miraculously grown and multiplied into three distinct churches with around 1,650 people attending weekly at the three locations.

To date, La Chappelle has baptized 450 new believers since its launch, and the church plans to continue to multiply through Montreal and into the rest of the French-speaking world.

“Without NAMB, the rhythm, the speed and the effectiveness of the churches we plant would not be possible,” Pothier said.

While meeting with the trustees, Pothier expressed his gratitude: “You have made it possible by your support of NAMB’s vision, and without the Cooperative Program, we might still exist, but we would not be multiplying at the rate we are now.”

While God is clearly at work, ministry in Montréal is not without its challenges. Dealing with the secular society involves more than just struggling to communicate the gospel with people who have no religious context.

Montreal has strict zoning laws that often make it difficult to rent space or build a church facility.

One planter, Tony Silveira, started a business that rents out its space as a conference center for parties and meetings. In addition, Silveira is starting a recording studio in the building.

On weekends, his church, Passion Centre, along with other churches, utilizes the space for worship. Though the size places some limits on the church’s growth, Passion Centre ministers to between 200 to 300 people every week.

“Because what I do is very unique,” Silveira mentioned, “I now have different churches from different denominations coming to see how we do church, and they are starting to copy our model.”

Silveira’s approach impressed many of the trustees as well. “In a place where all the outside forces are against him, he came up with a strategy to overcome,” said Danny de Armas, the second vice chairman of NAMB’s trustee board and executive pastor at First Baptist Church Orlando. “Visionary, articulate and innovative are three words I’d use to describe all of the church planters we met.”

On Monday night (Oct. 1), NAMB’s trustees, along with local missionaries, Canadian National Baptist Convention (CNBC) leaders and NAMB staff, celebrated the success of the plants in Canada. NAMB president Kevin Ezell reported that 62 percent of last year’s baptisms in Canada came from churches planted since 2010, and 47 percent of all CNBC churches in the country were planted since 2010.

“We’ve got to be looking for missionaries to engage a lost world, and this trip has helped me see that,” Crow said about the vision tour. “As a pastor, it convicted me for not doing enough to help my church see the needs beyond ourselves into the rest of the world.”