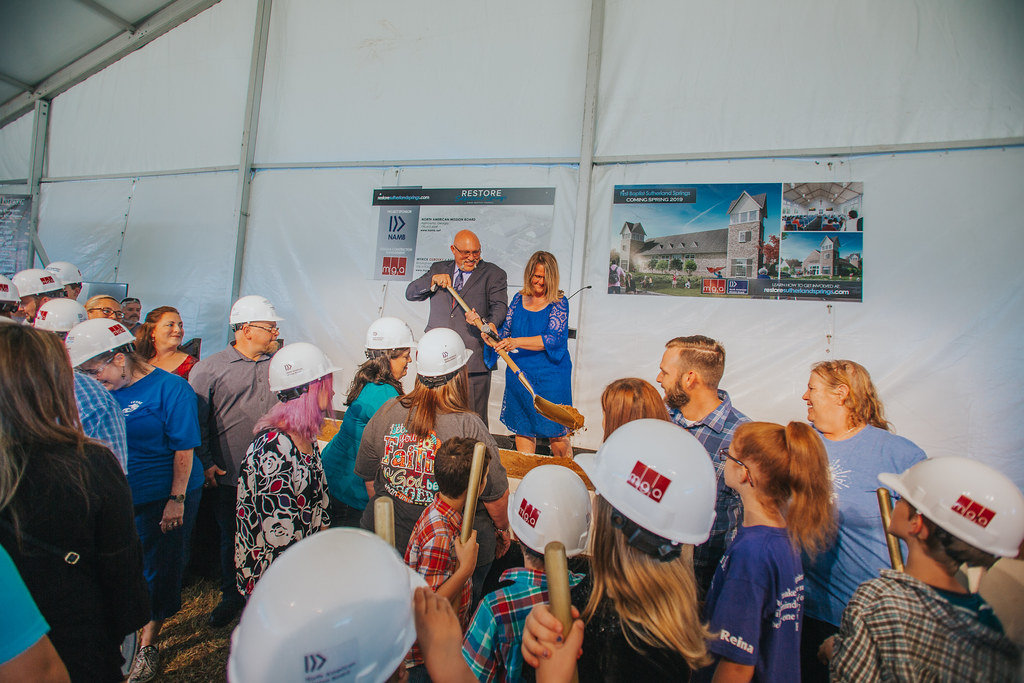 One year ago, Hurricane Harvey had yet to appear on radar.
One year ago, very few people had heard of First Baptist Church Sutherland Springs.
One year ago, a church planter in New Orleans was fighting for his life.

But a lot can happen in a year.

Nobody knows that truth better than pastors. It’s a job that demands dexterity and emotional depth. It’s a role that changes daily, if not hourly, to minister to congregations with diverse needs and widely varied demands.

“A lot can happen in a year” was the theme of the North American Mission Board’s (NAMB) 2018 Send Luncheon. Held during the SBC Pastors’ Conference, NAMB aimed to bless pastors with stories of faith, hope and redemption—and a dose of humor.

The capacity-crowd event overflowed from the main room into a live simulcast location as NAMB president Kevin Ezell hosted the luncheon and turned the crowd’s attention to everyday SBC pastors faithfully serving their congregations and communities.

Pastor David Fleming of Champion Forest Baptist Church in Houston, Texas, explained how he led his church to serve the community in the aftermath of Hurricane Harvey—even when his own home was flooded and in need of repair. While noting the importance of local ministry and national partnerships, Fleming thanked the SBC family.

“The Church really is on the front lines of ministry in any community. We don’t expect our national partners or even our state partners to be there on day one. That’s the church’s role, and that’s the church’s opportunity. We stepped into that gap first. But to know you guys were coming—to see the resources and the equipment and the organization—to have Southern Baptists come from literally all over the country to help us help our community was such an encouragement. I just want to say thanks on behalf of our church.” He also reported, “Almost 2,500, people mudded out 600 homes in just the first week after Hurricane Harvey…We saw God use that in our community.”

Church planter Justin Haynes of the Refuge Church in New Orleans, Louisiana, shared at last year’s Send Luncheon how important the prayers of fellow SBC churches had been in his battle against cancer. This year, he stood and shared with the crowd of four thousand that he is now cancer free.

“I have my hair back,” Haynes joked. “We greatly appreciate everyone in the convention and the North American Mission Board,” he added with tears in his eyes. “I still think about how you all blessed us.”

In a somber yet hopeful tribute to the ministry of First Baptist Church of Sutherland Springs, pastor Frank Pomeroy, who was met with a standing ovation from the assembled pastors, celebrated the beauty God is making from the ashes in the wake of the November 5, 2017 shooting at the church.

“Though there was pain, evil didn’t win. The Spirit of God was moving here,” said Pomeroy. “Through that trial, He brought victory…I would hope that when people think of Sutherland Springs, they think of Christ. And if everything that happened and everything we do thereafter gets people to focus on Christ, then that’s what it’s all about.”

“I’ve had the privilege of watching you lead…in a crisis that no other pastor in this room or North America has ever led through,” Ezell said to Pomeroy. “You have been an incredible model of leading a church through a crisis while at the same time walking through one personally.”

Pomeroy and Ezell also gave an update on the rebuilding efforts at the church which are being facilitated by NAMB and through private donations.

“When the North American Mission Board approached us and said that they wanted to build us a church, we were just flabbergasted,” said Pomeroy. One of the prominent features of the church building design is two towers. One is to house the church bell—a bell that was regularly rung by children who died in the shooting. On the other end of the building, another tower will shine with a perpetual light to remind the community of the everlasting light of Christ that pierces the darkness.

Surprise guest Beth Moore, in partnership with NAMB and Lifeway, gifted Pomeroy and his wife with a getaway vacation as they continue to heal in the aftermath of tragedy.

Pastor’s son and comedian John Crist rounded out the event with humor and witty observations about churches, congregations and the sometimes eccentric people inside them. Crist closed sincerely thanking pastors.

“It’s a tough, thankless job, so thank you for all that you do,” he said.

IMB president David Platt echoed that sentiment in a statement as the luncheon drew to an end.

“I thank faithful brothers all around this room who are serving in churches that many people will never know the name on that church and may never be on a stage like this one, but I just praise God for His grace, and I just want to exhort you that this is glorifying to God to faithfully shepherd and love His people in the place where He has put you—wherever that is.”