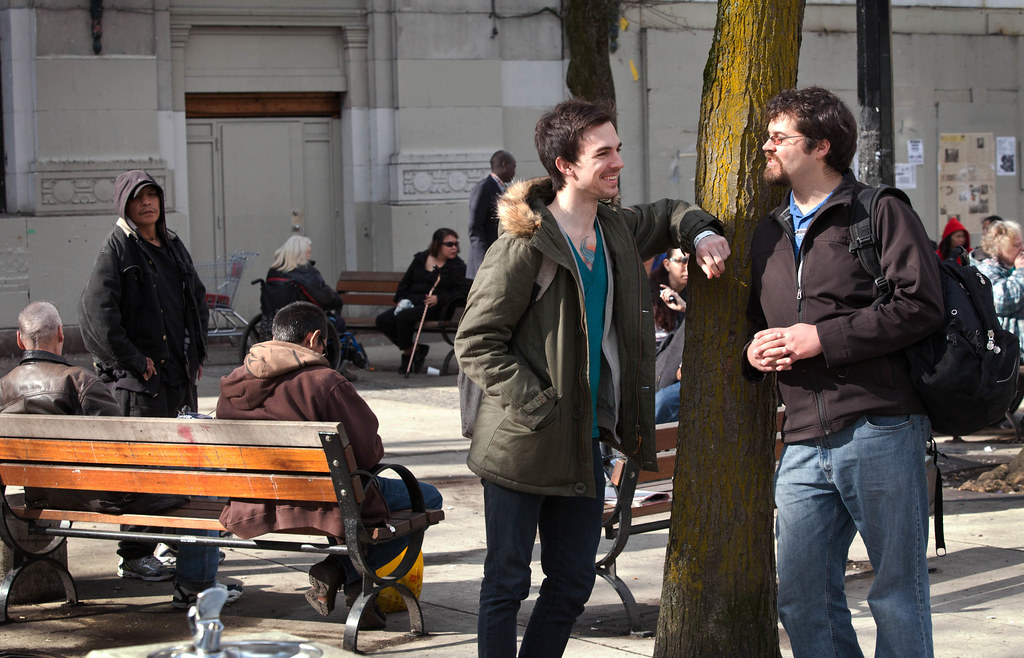 VANCOUVER, B.C. – Victor and Candice Thomas landed in Vancouver, British Columbia, promising they’d never stay—that was five years ago. They arrived in 2007, so Victor could start a four-month stint as a researcher at Simon Fraser University—what Victor called an extended honeymoon for the newlyweds. His study focused on environmental science and poverty. But the young South African entrepreneurs found a new calling in Burnaby, a quick train-ride from downtown Vancouver.

Three weeks before they were to return to Cape Town, Thomas walked the Burnaby campus of Simon Fraser, his eyes seeming to open for the first time.

“I saw these students with blank looks on their faces, and I started to tear up. For a South African male that’s not cool,” Thomas said. “It was as if God was saying, ‘Isn’t this the poverty I’ve called you to?’”

From a family with seven generations of pastors, Thomas told his friends he’d never be a pastor. And indeed he’d stayed true to this for more than two decades, though he always served the poor alongside his dad. He also started a company consulting on construction projects in environmentally sensitive areas.

“Life was good back in Africa,” said Thomas. “I’d just hired a friend and we had several big contracts. We’d never intended to stay in Canada.”

As God began to draw the Thomases to the work of The Point Church, a long drive with then-planter of The Point, Kelly Manire, sealed the decision.

“He told us he was moving on,” Thomas said, “and that he wanted me and Candice to take over.”

The Point, a Canadian National Baptist Convention church, had started years previous, but had dwindled to a small Bible study. Taking over The Point would amount to a relaunch of the church. As Thomas saw it, this also meant launching additional campuses in Coquitlam and in downtown Vancouver.

The annual Week of Prayer for North American Missions, March 3-10, 2013, and the Annie Armstrong Easter Offering®, provide support for Thomas’ work and missionaries who serve on behalf of Canadian and Southern Baptists in North America. With a goal of $70 million, this year’s offering theme is “Whatever It Takes – Reaching the One.”

The Point, which initially started as a university church, has grown to reach the surrounding communities in Burnaby, Coquitlam and Vancouver.

In the beginning a dozen people would show up for Bible studies. But as the Thomases realized the potential for reaching surrounding communities of families, they started a Sunday morning service. Now, during the Sunday service about 40 attend in Burnaby, nearly half of them students. Today across The Point’s four sites more than 90 people gather for weekend services.

“That has continued to grow as we’ve hosted community festivals,” Thomas said. “When God broke our heart for the city it was for the whole city, not just for Burnaby Mountain.

“God laid on our hearts a few parts of the city. Coquitlam for one was an area that’s been on my heart a lot. It is the least churched area of metro Vancouver, which means it’s one the least-churched areas of North America.”

It also happens to be one of the fastest-growing areas of the city. Soon it will be included on the SkyTrain line and last fall a new work began with a Bible study group.

“I sent a semester missionary over there a couple of times to find a person of peace but he came back and said ‘No one wanted to talk to me and I think security was following me,’” said Thomas, recounting what he’d soon reveal as a miracle. “So I went with him and we prayed we’d find the right person to talk to for starting a student group.

“Sure enough we turned down a random corridor and came across a lady taking a picture. We started talking. Usually I’m a little reticent to come out and tell people what we’re doing, but I felt God saying ‘Just tell her.’”

Thomas explained their idea of starting a Bible study on campus.

“It turns out that not only was she in charge of student groups at the campus, but she also happened to be from South Africa and had dated one of my uncles,” Thomas said. “She told us she’d help us work it out.”

Since that amazing day, Bible study groups at Coquitlam and in downtown Vancouver have been welcomed by the campus officials and have grown both in size and in stories.

“One lady heard about Jesus for the first time and said ‘Wow. He seems like an amazing person. Where can I learn more about Him?’ I told her there’s a whole book about Him called the Bible,” said Thomas. “She went home and read through the New Testament in a couple days and gave her life to Christ.

“She said ‘I wonder why no one ever told me about Him before,’” recounted Thomas. “I was amazed she had never heard the name Jesus.”