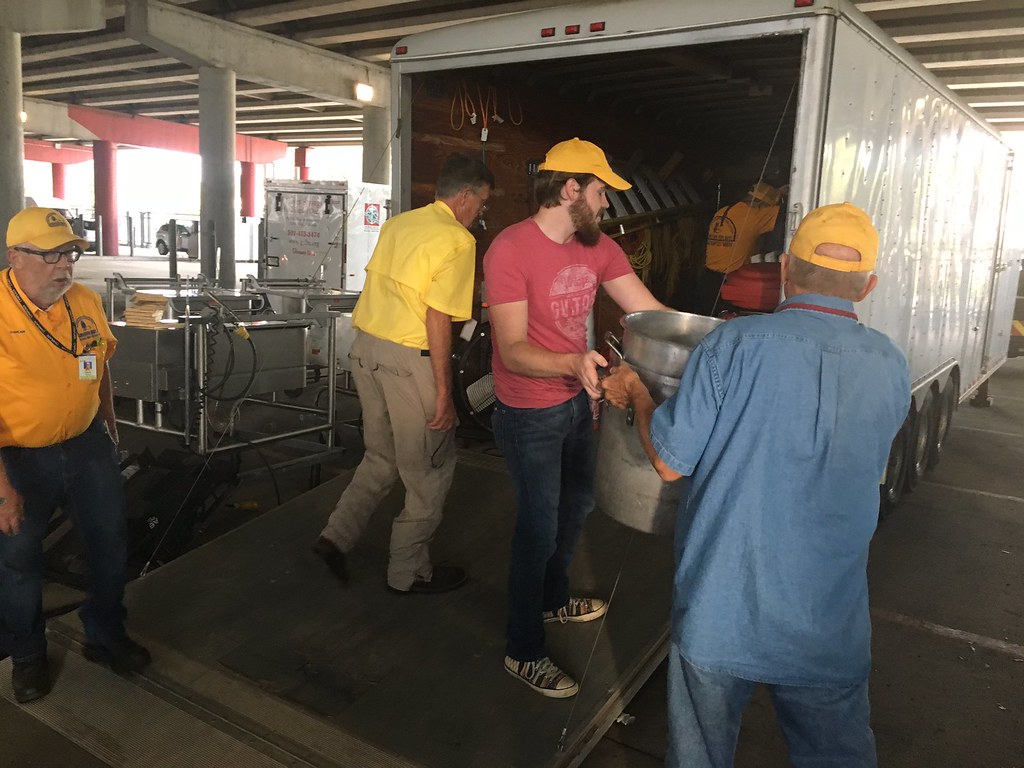 HOUSTON (BP) — Several days after Hurricane Harvey made landfall, authorities say many of the hardest hit areas in Texas remain in the search and rescue phase.

As state and local officials ask aid and relief teams to stay out of many areas until they complete rescue operations, Southern Baptist Disaster Relief (SBDR) is taking action where it is allowed. One Texas Baptist Men (TBM) rapid response feeding unit has been traveling with Task Force 1, a Texas search and rescue team.

Ray Gann was on that team.

Gann and the TBM team received a call to deploy at 10:30 a.m. on Saturday when Hurricane Harvey had just been downgraded to a Tropical Storm. They bought groceries, made the six-hour drive to Robstown and then embedded with the search and rescue unit, even sleeping in the same quarters as the first responders.

From Robstown, the team moved with Task Force 1 to Rosenburg where they spent two days, then on to Orange, east of Beaumont, and will continue serving that Task Force until search and rescue operations have completed.

“I’m proud of the team,” Gann said. “The feeding unit has been working well. They see us as heroes over there,” Gann said of the gratitude the first responders showed toward the kitchen unit volunteers.

Gann just recently transferred off the team and is now on a SBDR kitchen unit that is feeding of 11,000 evacuees at the George R. Brown Convention Center in Houston.

TBM is serving at several other locations including a kitchen unit in Victoria and a child care team is set up in Dallas to assist evacuees there.

The Southern Baptists of Texas Convention Disaster Relief (SBTC DR) has set up a mobile support kitchen unit at Annaville Baptist Church in Corpus Christi, Texas. The first meals at that location were to be prepared Thursday (Aug. 31) around noon.

Ray Schwertner, the unit leader, said that they were equipped to provide 2,500 meals twice a day. “We are supporting American Red Cross meal distribution by preparing the bulk meals that they serve at various relief locations.”

Providing food has been the priority thus far, and the SBTC DR teams have been supporting evacuation centers in several locations. As of Wednesday evening (Aug. 30), they were still waiting on water to recede in Beaumont so that they could set up a mass feeding unit there.

Bill Bumpas, a spokesman for SBTC DR, said that some cleanup efforts were expected to start Thursday in Rockport and that they “are aiming to begin feeding in Northwest Houston on Friday.”

While Houston and the surrounding areas have received extensive damage, Harvey has also created problems in Louisiana. SBDR units there are serving at evacuation shelters and will expand services as needed.

SBDR leaders and volunteers from across the nation have been eager to help those affected by Hurricane Harvey. Persistent flooding, however, has hindered a broader response.

Additional kitchen, shower and laundry units with teams of volunteers are standing by to begin serving when called upon. SBDR teams from Oklahoma and Arkansas are currently serving in Texas as well.

Churches have also voiced the desire to serve. The North American Mission Board (NAMB) began collecting names of churches and individuals that want to serve once flood waters have dissipated and opportunities are available.

“Southern Baptists are anxious to help Texans in any way they can,” said David Melber, vice president of Send Relief at NAMB. “This will be a long-term response, and we will get people serving as quickly as possible.”

To donate to NAMB’s disaster relief fund, visit namb.net/Harvey. NAMB is sending funds and resources to where needs are most urgent.