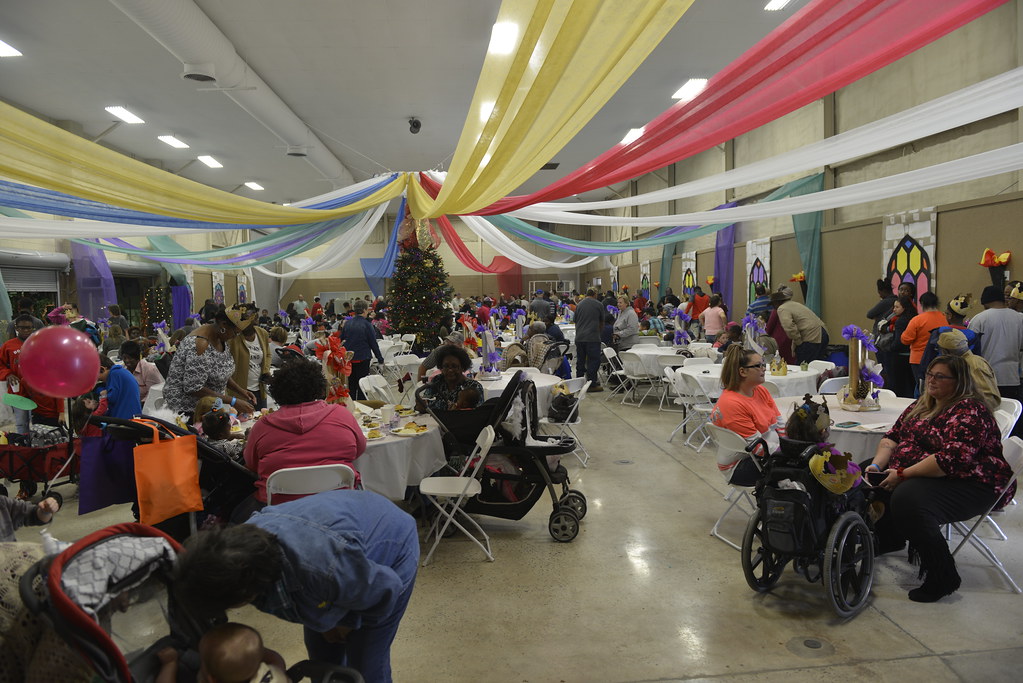 VALDOSTA, Ga. — Her eyes brimmed with tears as she approached Jay Watkins. Her family was homeless, and Christmas was less than a month away.

The woman’s voice choked with emotion as she explained that she didn’t even have sheets for her daughter’s bed when they walked into “Christmastime at Camp Rock,” an annual community event hosted by churches in Valdosta, Georgia, a county seat town of 54,000 in southern region of the state.

Now she was leaving the event with a comforter set she had won as a door prize.

For the past five years, the Camp Rock event has touched the lives of many needy families in Valdosta. This year, more than 900 children – most of them kids in foster care – and their parents and guardians enjoyed a four-and-a-half-hour, Camelot-themed festival that featured three large rooms decorated as a castle, a forest and a medieval marketplace. Participants enjoyed a meal, and children received gifts of toys and clothing. Bibles were given to those who wanted them, and everyone had the opportunity to hear the good news of God’s rescuing love.

The sheer scale of the event – and its life-changing impact on so many people – says more about the God behind it than the churches organizing it. Redland Baptist Church, where Watkins is pastor, is a rural crossroads congregation of 300.

In fact, the crisis engulfing children in foster care  looms so large that many churches don’t see how they can make a difference. In the United States, a child enters foster care every two minutes, and nationwide more than 415,000 children languish in the foster care system. Almost half of those who “age out” of the system are homeless within a year.

“Words simply do not describe the tragic situation of thousands of foster kids across our country,” says David Melber, vice president of the North American Mission Board’s SEND Relief initiative. “But Southern Baptists have the capacity to significantly change this situation. For more than 46,500 churches, this actually is a manageable issue. The truth is, a ‘normal’ SBC church like Redland can do incredible work toward helping children caught up in this crisis.”

Watkins says just taking a step of faith toward meeting critical needs in the community can transform a congregation.

“Fifteen years ago, Redland ran a strong 40 in worship,” he says. “When we started engaging in missions, it radically changed who they are.”

Redland works closely with social workers in the county to understand how they can best help children and families in need. “It has opened our eyes to what our community really needs,” he says.

Camp Rock grew out of a summer camp hosted in 2011 by the Valdosta Baptist Association for children from high-risk environments who might never experience a sleep-away camp. Leaders saw how the weeklong experience changed the kids outlook on life and began looking for other ways to show the love of God to children in need. Now Valdosta-area churches cooperate to conduct Community Days, which fielded 1,200 volunteers to serve 25,000 people this past summer – and has seen about 1,000 people profess faith in Christ over the past five years.

Community efforts have developed into new ministries that also serve adults. Foster parents can take advantage of baby-sitting services when they are scheduled for state-mandated training sessions. A new mobile training center will take life-skills training and English classes into impoverished neighborhoods and migrant camps.

But the compelling issue for Watkins was the children.

“We have almost 200 homeless children in our county, which has less than 150,000 people,” he says. “In our area, 165 kids ages 2 to 4 will spend Christmas away from their families. It’s a heart-breaking situation.”

When he started out, Watkins didn’t know exactly how the church would make a difference, but he knew they had to.

“I didn’t realize community missions would grow my church,” he says. “I just knew I loved kids. I wanted my church to love kids, to love on families that love kids.”

Watkins and his wife, Sandra, have four children – all adopted.

Regardless of a church’s size, the critical needs of children in the foster care system ought to compel them to get involved, Watkins says.

“I don’t care what size church you are, if you are a church that’s alive, you need to find out what you can do,” he says. “We don’t get to say, ‘That job’s too big.’ We serve a really big God. If we were a church that existed just to have services on Sunday and Wednesday, our community wouldn’t miss us. But now we are feeding families – more than 175 kids on Wednesday evening. Lives are being radically changed.”

Many Christians are so overwhelmed with what has to be done that they don’t do anything, Watkins notes.

“Smaller churches shouldn’t focus on what  they can’t do because of their size,” he adds. “They should find something they can focus on and do that. We’re just a blue-collar country church, but we want to say ‘Redland loves Valdosta.’”

The power of cooperation helps smaller churches make an outsized impact on their communities, says NAMB President Kevin Ezell, who served as a Christmas at Camp Rock volunteer with his wife, Lynette, and several of their children.

“Redland is a shining example of how a church can leverage partnership with their community, other congregations, their state convention and the Southern Baptist Convention,” Ezell explains. “Congregations like this are demonstrating how any church of any size can have an incredible impact when they see a need and are faithful to do what they can to meet it. Jay never hesitates to take on a God-sized challenge, because he has seen over and over again what God can do with some faithful servants.”

Learn more about Camp Rock at camprockga.com. Visit NAMB’s Send Relief web site to explore ways you and your church can start meeting needs and sharing Christ in your community: https://www.namb.net/send-relief/

Mark Kelly writes for the North American Mission Board.