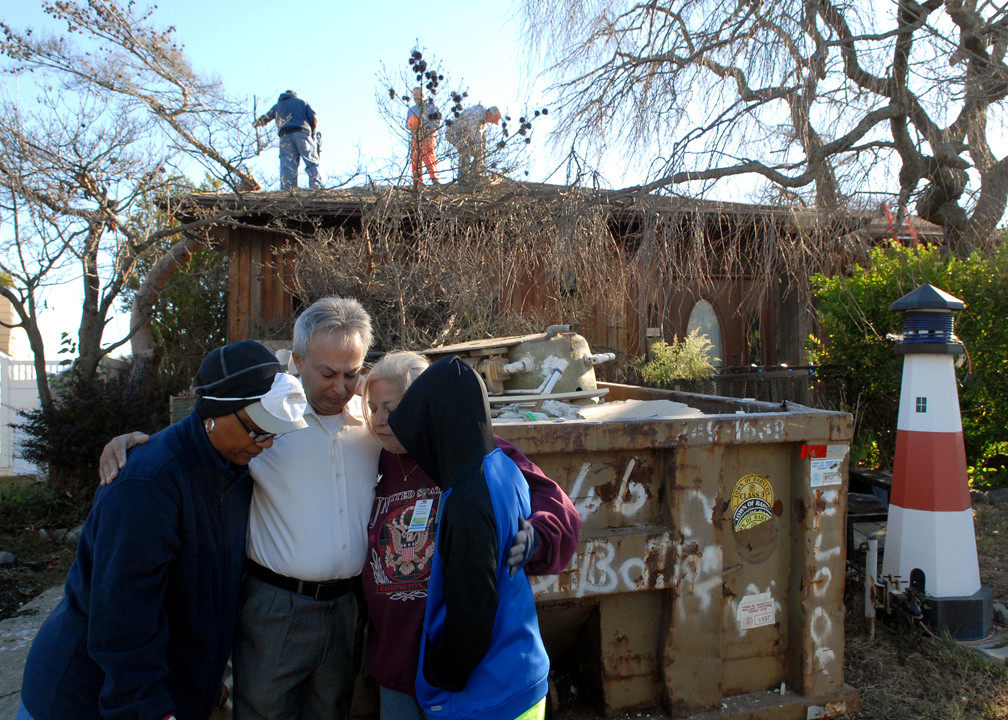 Raab’s waterfront home took on five feet of water from Hurricane Sandy’s storm surge and was hit hard by strong winds and waves off Long Island’s Great South Bay. Overwhelmed by the extensive damage, Raab said he could not bear to face his home of 25 years to begin repairs.

“There have been weeks that I have driven by and could not even go into my house. I would avoid coming here,” he said.

“My life has literally been on hold for 11 months. It took me months to finally pick up the phone and say, ‘Help.’”

For 10 days after the storm, Raab managed the Nassau County, Long Island American Red Cross shelter that housed 1,200 families at its peak. He said that he spent many sleepless nights, waking up thinking about everything from the storm’s damage to the stories of the suffering people in the area.

“Here I am helping hundreds of families and I was too proud to reach out for help for myself,” he said. “New Yorkers don’t feel very comfortable reaching out for help. We’re independent and self-sufficient. We’re very proud people. And this area was hit so hard that there are people who are out there who are so hurt and in such internal pain that they still can’t say ‘I need help.’”

While working with SBDR leaders in the community he discovered volunteers could help him.  Sandy Rebuild is a two-year effort through August 2015. Assisting the Baptist Convention of New York, Metro New York Baptist Association, New Jersey Net and local churches with repairs and community restoration are North Carolina Baptist Men and the North American Mission Board (NAMB). Sixty-two percent of the recovery need in New York is in Long Island, said NAMB SBDR recovery coordinator Mickey Caison.

Shortly after his call for help, a team came to meet Raab and to begin tearing out his basement. Since the storm, Raab has lived 35 miles away from his empty home. He stopped on his way to work to meet with the crew in the mornings and evenings. He recently was appointed as storm recovery liaison for Nassau County.

That first day the team from Ewing Baptist Church of Ewing, Ky., filled up one and one-half dumpsters with water-soaked furniture and debris. They cut tree limbs, patched his roof and cleaned the yard. Fourteen members from the church were joined by three other volunteers from nearby Kentucky churches who worked with other SBDR volunteers from Illinois, North Carolina and South Carolina for the week on Long Island.

Raab returned at day’s end and said he was overcome by all the work the group did.

“When I came here and walked in the door and I saw people helping me I started to cry.  It just all came together. We prayed together. It was very powerful for me and has truly built my faith again,” he said.

Volunteer Jennifer Bussell said she and the team saw such a change in Raab over the three days they served.

“On Monday, he looked lost and hopeless. He didn’t even know where to start,” said Bussell.  She said the team helped him realize, “he is one step closer to going home and that things are going to be okay.”

Ewing Baptist pastor Keith Abrams and his wife, Linda, said the week’s work was a great experience for the group since they developed relationships with the homeowners, which is not always the case on ministry sites.

“We had many opportunities to pray with them and to have conversations,” said Mrs. Abrams. “God made it clear to us that we are not here always just to do the physical work. People are more important than the work.”

Raab said he was thankful for not only the work the group did but also for their uplifting support.

“When you see people come together when there is need and people are at their weakest, you get strength from others,” said Raab. “There are people out there who love others and who are willing to go beyond themselves. I will be forever grateful to them. You guys brought me back to life. I can go home now.”

“I just saw the light of God and hope put back in him,” said Bussell. “God restores. And that’s what this [ministry] is all about.”

Raab said he can now see himself beginning the rebuild process on his home and his life.

Southern Baptist volunteers, 10,678 strong, have served 1.85 million meals, completed 2,678 jobs, shared the gospel 878 times and witnessed 116 professions of faith since Superstorm Sandy made landfall Oct. 29, 2012. To volunteer for or learn more about Sandy Rebuild visit https://www.namb.net/Sandy. To view a related video, visit https://www.namb.net and click on the Spotlight viewer.