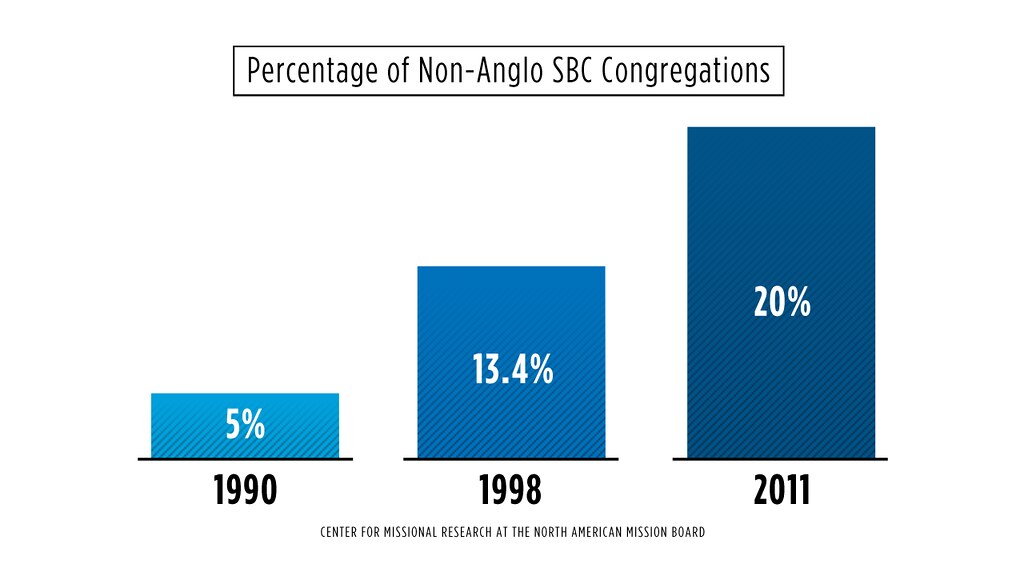 ALPHARETTA, Ga. – The number of non-Anglo Southern Baptist Convention (SBC) congregations has jumped by more than 66 percent since 1998, according to the Center for Missional Research at the North American Mission Board.

According to Annual Church Profile ACP statistics provided to NAMB by LifeWay Christian Resources, 10,049 of 50,768 SBC congregations identified themselves by an ethnicity other than Anglo in 2011, the most recent year for which detailed data on ethnicity is available. That’s up from 6,044 non-Anglo congregations in 1998.

“It’s clear that Southern Baptists have been multi-ethnic and are becoming an even more multi-ethnic convention of churches,” said Joseph Lee, the senior pastor of Connexion Church in Lawrenceville, Ga., a mostly Korean Southern Baptist congregation. “The trend is gaining speed week by week. For example, the ethnic churches grew from zero to more than half of the total number of churches in our county in the past 10 years.”

The diversification of the convention comes at a time when the United States as a whole is growing more diverse. In September 2012 USA Today reported that the number of all-white communities in the United States has plummeted since 1980, according to an analysis of census data by Penn State University’s Population Research Institute. Less than a third of U.S. counties are 90 percent Caucasian.

The largest jump in non-Anglo SBC congregations from 1998 to 2011 has predominantly come from an 82.7 percent increase in the number of African American congregations.

For Fred Luter, pastor of Franklin Avenue Baptist Church in New Orleans and the first-ever African American president of the SBC, the diversification of the SBC has become very personal.

“I remember at one time I was the only [African American pastor] in my city who was Southern Baptist,” Luter said. “I caught a lot of flack as a result of that. Thank God I’m able to see some of the fruit of my labor—not only at my particular church but in the associations and conventions across the country.”

Hispanic congregations have also seen a significant increase over the same span—nearly 63 percent. The number of Asian congregations affiliated with the SBC has grown by 55 percent.

“We are only able to categorize congregations by ethnicities—not members—because the ACP only asks the predominant ethnicity of congregations, not individuals,” said Richie Stanley, the director of the Center for Missional Research at NAMB.

Despite the growing diversity of SBC congregations, there are still a variety of ethnic groups in North America with no SBC presence among them. Mark Hobafcovich, NAMB’s national coordinator for church mobilization, points to the Albanian people as an example. He says there are more than 500,000 Albanians in the United States but no SBC congregations and only one evangelical church among them.

“As Southern Baptists partner together to plant new evangelistic churches, Albanians and other people in North America can hear the Gospel in their heart language, come to faith in Christ and be discipled so they in turn can make other disciples and plant churches here at home and throughout the Albanian diaspora around the world,” Hobafcovich said. “Only by a movement of God can we see biblical multiplication and the Kingdom of God exponentially expanded.”