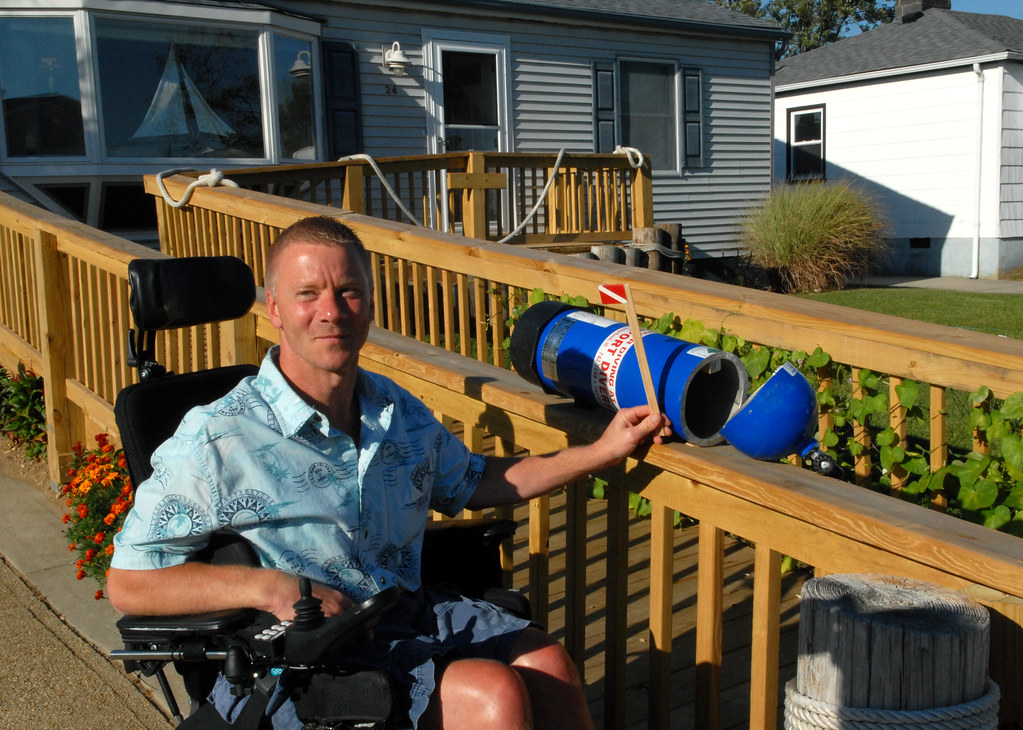 “The result of the Baptists being here – building the ramp – allowed my soul to just open up and let Jesus in. I’ve been telling my story to whoever is willing to listen. That’s my job now.”

LONG ISLAND – “They came to not only repair my house, but they looked after my soul,” said Colleen Phillips. Phillips is one of many Long Island residents who has been positively impacted by the Southern Baptist Disaster Relief (SBDR) volunteers who worked for several months on homes flooded by Hurricane Sandy.

“Southern Baptists were my silver lining in the storm,” she said. Phillips’s marriage ended after the storm. She returned to the house months later and began repairs, gutting the mold-infested walls. An April storm brought panic when she and her daughter struggled to stop rainwater from pouring in through an opening on the side of the house. She made a call to a local Long Island volunteer agency but no one was available.

“Then Tom and Bill walked up,” said Phillips. “They were in their yellow hats and yellow shirts. I looked up and asked them, ‘Can I help you?’ Bill said, ‘No, but I think we can help you.’”

Sandy Rebuild project coordinator Bill Johnson, from Grayson, Ky., and Tom Vannoy, Long Island coordinator, from Wilkes County, N.C., had taken the agency’s referral. Soon the two were taping up the side of the house in the rain with garbage bags and duct tape that Phillips was using. They returned the next day with a tarp and sealed the hole.

Since then many SBDR teams have come to help Phillips. They have redone the basement and first floor hanging drywall, painting and even planting flowers outside. In September, a Sandy Rebuild team from Biltmore Baptist Church of Asheville, N.C., installed a new vinyl floor in the basement. The team served with SBDR volunteers from Kentucky, Illinois and South Carolina.

Seeing the home’s progress was nice, said long-time missions volunteer Faye Alexander with Biltmore Baptist. Alexander, who has served on SBDR teams since Hurricane Katrina, said she goes on missions with the attitude of “we are here to fix your house, but the first thing we want to fix is your heart. Colleen was so excited that we were there and so appreciative. Every morning she fixed us something different to eat,” said Alexander.

Phillips said teams prayed with her on every visit. Each group signs a Bible given by one of the first teams that served her.

“One group formed a huge prayer circle. It was fantastic. It was such a large circle even they were amazed at it. They just sent me so many ministers along the way and they always made sure that I was okay,” she said.

“While our volunteers and team members share the gospel as they have opportunities, Randy does follow up. He has time to be more deliberate in sharing the gospel,” said Mickey Caison, NAMB Disaster Relief team leader and overall director for Sandy Rebuild. “In that process he’s not only having that opportunity but he’s seeing the fruits.”

“They were so intent on listening to whatever I had to say,” he said.

Sandy’s storm surge flooded McElroy’s home and destroyed his ramps. The former diesel mechanic was an active surfer and scuba diver. He was diagnosed with multiple sclerosis in 1998. He and his wife, Lynette, have lived in Freeport for 15 years. The couple returned to their home 52 days after the storm struck.

The witness of a 14-year-old volunteer named Bradley from West Albemarle Baptist Church in North Carolina changed his life forever, McElroy said. While the two were cleaning a rope that hung on the ramp railing, Bradley stopped to make the comparison of the dirty rope to sin.

“When we are full of sin we are dirty like the rope. When we confess our sins we are clean again like this part [of the rope] that I just rinsed off,” Bradley told him.

McElroy said that he was aware of Jesus his entire life and believed Jesus was always with him. “But that day between Bradley and the rope and giving a goodbye hug to the volunteers and driving out, once I turned the corner a couple of blocks up I had to pull over,” said McElroy.

McElroy said he was overcome with joy. At that moment he understood what the month-long experience with the volunteers had been all about.

“The result of the Baptists being here – building the ramp – allowed my soul to just open up and let Jesus in,” said McElroy. “I’ve been telling my story to whoever is willing to listen. That’s my job now.”