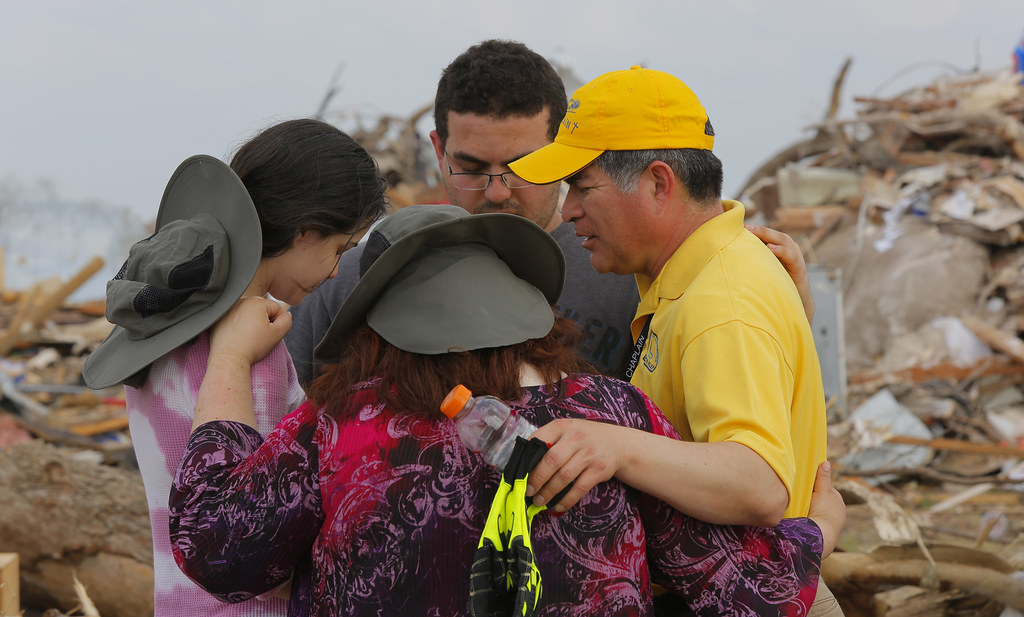 MOORE, Okla. – For 90 minutes on the afternoon of Monday, May 20, 2013, Ivette Castro didn’t know if she, her 16-year-old daughter and 20-year-old son would live to see the evening as an EF5 tornado—the most powerful rating possible—bared down on them. Trapped in a small closet together, the three prayed. Admittedly their spiritual background had been spotty at best. The family rarely attended church.

But in those hot, cramped quarters, it became obvious to Castro that God was sparing her family.

“Other than a miracle, [we wouldn’t have gotten out],” Castro said. “We were pinned in. So many things happened. I was supposed to be at work. I decided to stay home for some reason. Because I stayed home, I was able to get my kids to do the things that saved their lives.”

As Castro dealt with the aftermath of her and her children’s rescue, Southern Baptist Disaster Relief volunteers were there to help her through it—and point out God’s activity in the midst of the storm. Shortly after the storm, Castro met the North American Mission Board’s chaplain coordinator for disaster relief, Enio Aguero. He prayed with her and listened to her story—one of the most important responsibilities of a chaplain in a disaster situation. The next day a disaster relief team from North Carolina Baptist Men helped Castro and the family find a variety of items they had given up for lost—like a hard drive containing photos and an urn full of a pet’s ashes.

Those volunteers were among hundreds of Southern Baptists who are helping Oklahoma storm survivors in Moore and Shawnee, Okla., following historic tornadoes early last week. To date, 41 SBDR volunteer chaplains have been engaged in the response. Oklahoma SBDR mobile kitchens have prepared more than 35,000 meals in the two sites throughout the past eight days. More than 160 recovery and clean up jobs have been completed.

“I felt like God called me here,” said Bill Ammons, a volunteer from Bethany Baptist Church in Winston-Salem, N.C., one of the volunteers who helped Castro clean up her property and find lost items. “I’ve felt like God has called me other places, too. When He calls me, I go.”

Billy Puckett, a member of First Baptist Church of New Orleans, has been helping his Louisiana team with a variety of tasks in Moore—like repairing roofs and debris removal. He notes that Louisiana has been on the receiving end of significant Southern Baptist Disaster Relief work over the past several years—from Hurricane Katrina in 2005 to Hurricane Isaac last year. Since Oklahoma Southern Baptists had been such a big part of those efforts, Puckett wanted to come alongside of them in their time of need.

“I’d like [the people of Oklahoma] to see that we want to come and stand alongside of people, love on people and hug people during their tough times,” said Puckett, who serves as the director of community ministries for the New Orleans Baptist Association. “If they have a bad perspective of the Church, I hope this gives them a new perspective of the Church.”

A Kansas-Nebraska Southern Baptist Disaster Relief team saw that in action over the weekend. On one of the ministry locations the team talked with a 28-year-old woman who was a believer but wasn’t involved in church. The team’s chaplain, Brian Rothrock, shared with her the story of Nicodemus and encouraged her to get involved in a local church. As the volunteers left, the woman told Rothrock that God had been drawing her back to Him for some time and the experience of seeing the team’s faith in action had left her changed and committed to getting involved in church.

“She got to tell her story,” said Kelly Cook of Crosspoint Church in Hayes, Kan. “She was encouraged, and she was changed. We were just another piece of God showing His love to her.”