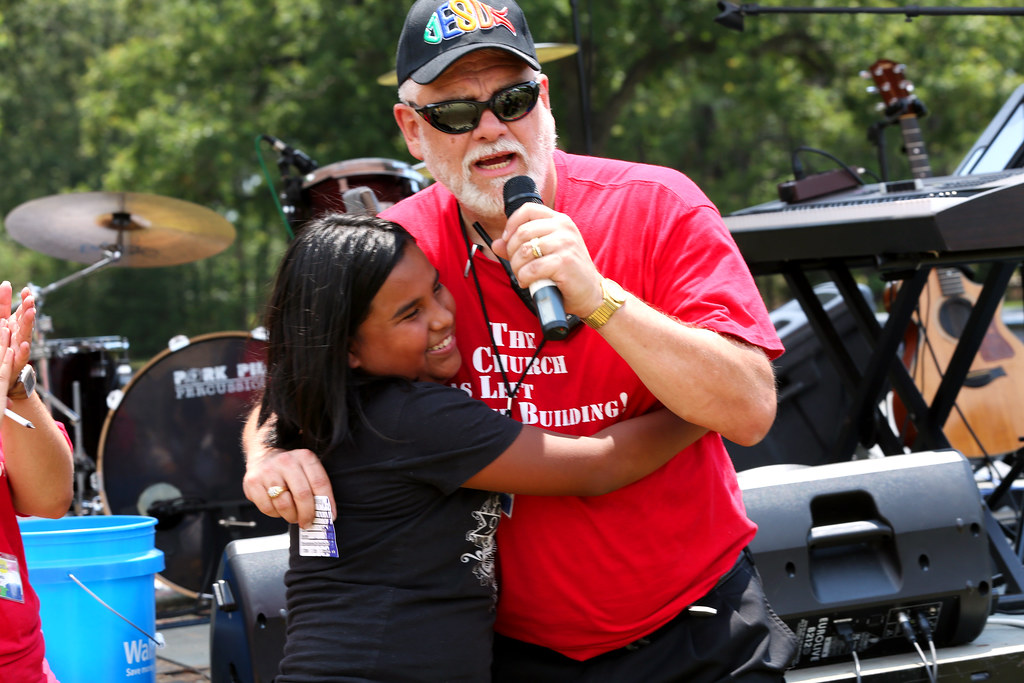 By Tobin Perry and Sara Shelton

HOUSTON ­– A sun-soaked day broke over Houston on Saturday as thousands of volunteers scoured the city cleaning properties, renovating schools and homes, hosting block parties and sharing the gospel. It was all part of Crossover, the intentional evangelistic day of emphasis held each year in the host city of the Southern Baptist Convention’s annual meeting. The day also served as a celebration point for Loving Houston, a community transformation movement headed by the Union Baptist Association.

Churches across Houston witnessed firsthand the power of partnership as volunteers shared Christ through service and evangelism. Pastor John Neesley and his team at Lazybrook Baptist Church hosted a block party for their community. Their prayer for partners brought them teams from Florida, Kentucky, South Carolina and North Carolina. Volunteers spent the afternoon running games, cooking hotdogs, making crafts and sharing the gospel.

“Sometimes you look at the community around you and you’re not sure how you’re going to reach them all,” said Neesley. “Then God sends partners to help you in that work. Our church is humbled to have people partner with us to host these block parties and reach our neighbors.”

One such partner was Clint Smith, pastor of Town Creek Baptist Church in Akin, S.C. It was Smith’s first Crossover experience. Together, Neesley and Smith presented the gospel and saw more than 13 people led to Christ.

“It requires a lot of energy to do something like this and pour into a community,” Smith said of the event, “but it’s worth it when you see lives changed and someone says, ‘Yes, now I belong to Christ.’”

In the parking lot of Holman Street Baptist Church, pastor Al Payne led a team of volunteers in prayer and offered a word of encouragement before sending them out to serve the city of Houston.

“The work you’re doing to help us serve the community today — cutting grass, pulling up weeds, working on homes — that’s all physical labor,” Payne told the team, “but it will help us connect people to the spiritual, and that’s what’s most important.”

These volunteers were just a few of many representing churches across North America who came to partner with Houston area churches to love and serve the city as a part of Crossover. Holman Street alone saw teams from churches in Ohio, Texas and Wyoming joining them for a day of beautification and community transformation projects.

The efforts surrounding Loving Houston brought a milestone for the vision cast by Union Baptist Association director of missions Tom Billings and his team. Crossover was an exclamation mark.

“We wanted to be a part of Crossover to partner with our brothers and sisters serving in Houston,” explained Chris Rhodes, pastor of Dover Baptist Temple in Dover, Ohio. Rhodes brought a team of 13 from his church to be a part of the day.

Elias Montalvo, a church planting specialist for the North American Mission Board, traveled from Wyoming to participate.

“This initiative allows us to show people that we’re here to serve them because we serve the Lord,” Montalvo said. “Then we can point them back to Him, too.”

“Crossover was a great day for the SBC and for Houston,” said Nathan Lorick, state director of evangelism for the Southern Baptists of Texas Convention. “Of course the greatest aspect was seeing people come to faith in Christ, that’s the best result we could ever ask for. To see so many churches mobilize their people, and Southern Baptists from around the country, helping churches connect with their communities with intentional evangelism, honoring God with their service, it was so exciting.

“It was a joy to see the SBTC partner with NAMB to help facilitate intentional community evangelism. It was a true joy to see pastors so encouraged by seeing their people mobilized. Apart from seeing people come to faith in Christ, that gave me the greatest joy of the day,” said Lorick.

More stories of life change were flowing out of Clay Roads Baptist Church’s block party, one of more than 20 held across the city. Led by pastor Bruce Northam and youth pastor Jacob Shelton, the event saw volunteers from several Texas area churches joining them to host games, play music, paint faces and share the love of Christ.

“We really encouraged our congregation to step out of their comfort zone, out of our building and into the community,” pastor Northam explained. “We want people to know that our church is here for them, but, more importantly, so is Christ.”

At their event, Northam saw more than seven professions of faith, the importance of which is certainly not lost on his team.

As Crossover Houston was unfolding, leaders were already looking ahead to Baltimore, host city for the 2014 SBC annual meeting. Baltimore director of missions Bob Mackey spent Saturday visiting block parties and service projects around Houston in an effort to get a feel for the event.

“It’s been a real blessing to see what’s happening in Houston,” Mackey said. “Our prayer is that God will start preparing these same hearts for service in Baltimore next year.”

As part of its Loving Houston efforts for the past two weekends, Horb Iglecia church and Clear Lake Baptist Church have helped paint and repair the roof of a house in the city’s historic fifth ward. Clear Lake pastor Glenn Young says it has been a great opportunity to get the church out into the community and involve itself in community transformation.

“It doesn’t matter what we do at the convention, I think the [secular] reporters are going to be focused on the wedge issues,” said Young, noting that Southern Baptists have little control over how the media describes them. “When they hear that, I want Houston to see the love aspect of us. This is a visible example of God’s love for the city of Houston.”

Homeowner Stella Rochon says she is grateful for the work on her house by Southern Baptist volunteers.

“I didn’t have any money to do all they are doing,” Rochon said. “I think it’s great — really great that they come out and help people do things like this.”

Denise Aguilar, also of Clear Lake, volunteered on the project with her mother, brother and sister for the second straight weekend.

“The Bible says do unto others what you want them to do to you,” said Aguilar, as she helped her mother and younger sister tape a door of the house before painting it. “We’ve had a lot of people from our church come and help us when we’ve needed it. This is our way of giving back.”

Though the efforts of the Clear Lake and Horb Iglecia team were focused on meeting the practical need of repairing the home, they also appreciated the opportunity to show Houston how much God loves the city.

“I hope Houston will see Christians helping other people, and it will bring more people to Christ,” said Linda Daniel of Clear Lake.

Crystal Healer was invited to be a part of the project by her boyfriend. She said because of work commitments and being a student she often doesn’t get an opportunity to serve with the church as much as she’d like. She notes that the church reached out and helped her with a variety of financial needs. She likes having the opportunity to help others just as Clear Lake has helped her.

“I want people to see the Lord Jesus in us,” said Healer, who has been at Clear Lake for the past year and a half. “Some people have a stereotype based on the media and television. But Jesus was a carpenter. He would be out here sweating with us. He says to help the poor and the underprivileged. I think this helps people see Jesus in us. Then they are more apt to ask questions about our church and what we believe. You get a lot people saved that way.”

Tobin Perry and Sara Shelton write for the North American Mission Board. NAMB writer Joe Conway contributed to this story.