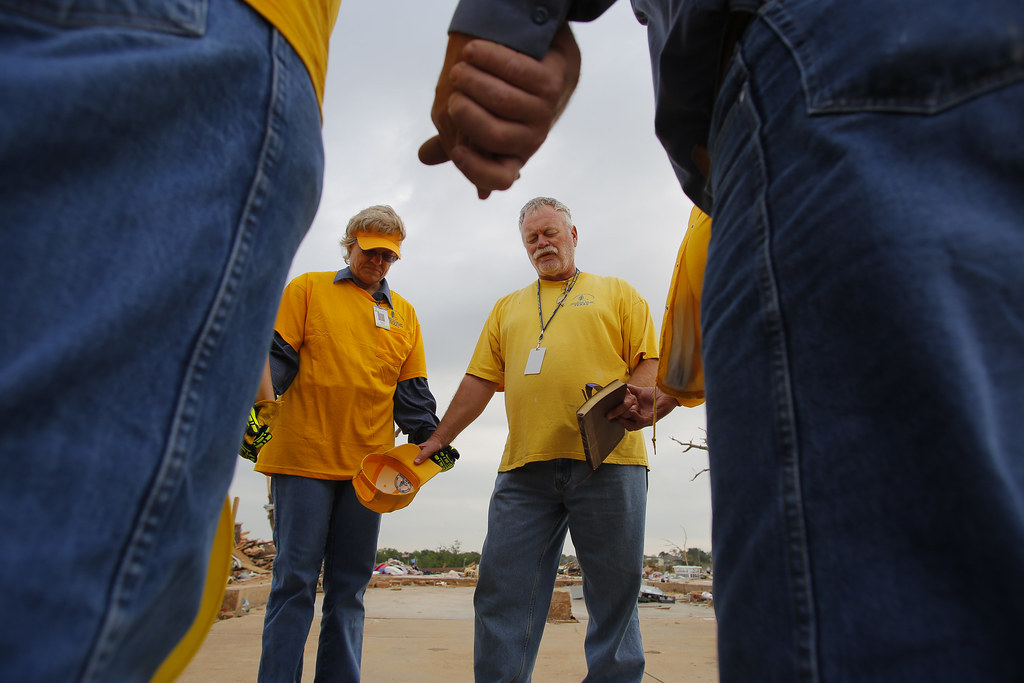 MOORE, Okla. – As Corey Callens wades through the piles of broken furniture, brick, wood and toys that used to be part of his home, he stops every so often to pick up something shiny.

The shredded children’s books, clothing and video games scattered throughout the neighborhood can be replaced. Seven championship rings from high school and his days as a four-year starter for the University of Oklahoma’s football team can’t be replaced as easily.

“I like to tell our team that they’re short-term missionaries,” said Joe Henond of Paramount Baptist Church in Amarillo, Texas, the team’s blue hat. “That’s what they are. We’re here for a short period of time, but we’re missionaries just like the people overseas. It allows people to come and do work and let their work be their testimony.”

“The people going through this are so devastated that they need to see a ray of hope,” he said. “When they can see that ray of hope and we’re doing what we’re doing for Jesus’ sake, the Holy Spirit is going to work.”

Henond is among 183 Southern Baptist Disaster Relief volunteers from seven state conventions on the ground serving the people of Moore, Okla., on Friday, four days after the tornado hit. Today marks the most significant movement yet of Southern Baptists into impacted areas as rescue efforts wind down and the significant work of cleanup begins.

Volunteers responding in Moore Friday are from the Baptist state conventions in Oklahoma, Missouri, Iowa, North Carolina, Kansas-Nebraska and from the Southern Baptist of Texas and Texas Baptist Men. The Oklahoma SBDR mobile kitchen in Moore has prepared more than 20,000 meals, to date.

Meanwhile in Shawnee, 140 volunteers from Arkansas, Oklahoma, SBTC and TBM were working Friday. The Oklahoma kitchen there has prepared more than 12,000 meals.

“The focus today is getting teams into the affected area—getting our yellow shirts on the ground,” said Eddie Blackmon, the North American Mission Board’s disaster relief coordinator. “Ninety percent of the jobs will be debris removal. We’re going to assist families in getting to their personal items as best we can.”

Along with teams participating in debris removal, disaster relief chaplains continue to walk through the grieving process with the families of the 24 people who died during the tornado. Southern Baptist chaplains will be present at most of the victims’ funerals, the first of which took place yesterday. Several more will take place today, including multiple funerals at First Baptist of Moore, the incident command location for Southern Baptist Disaster Relief.

“Today will be the next step,” said Susan “Bunny” Yekzaman, a disaster relief chaplain from First Baptist Church of Broken Arrow, Okla. “We’ve had the chance to work with them through every hurdle and now this will be the biggest one.”

As an example of walking through these hurdles, Yekzaman shared the experience of being with a mother whose child had been killed earlier in the week.

“I’m here to walk through this with you,” Yekzaman told her as they embraced.

“I don’t think I can walk; I’m going to have to crawl,” the mother said.

“Then I’ll crawl with you,” Yekzaman said as the two got down on their knees together.

Marisha Callens says that the experience of seeing so many volunteers—including Southern Baptists—come to her neighborhood and help with cleanup has taught her the importance of helping others.

“I really don’t know [why people would come to help us], but I’m very grateful,” Callens said. “They’re lending a helping hand and they’re total strangers.”