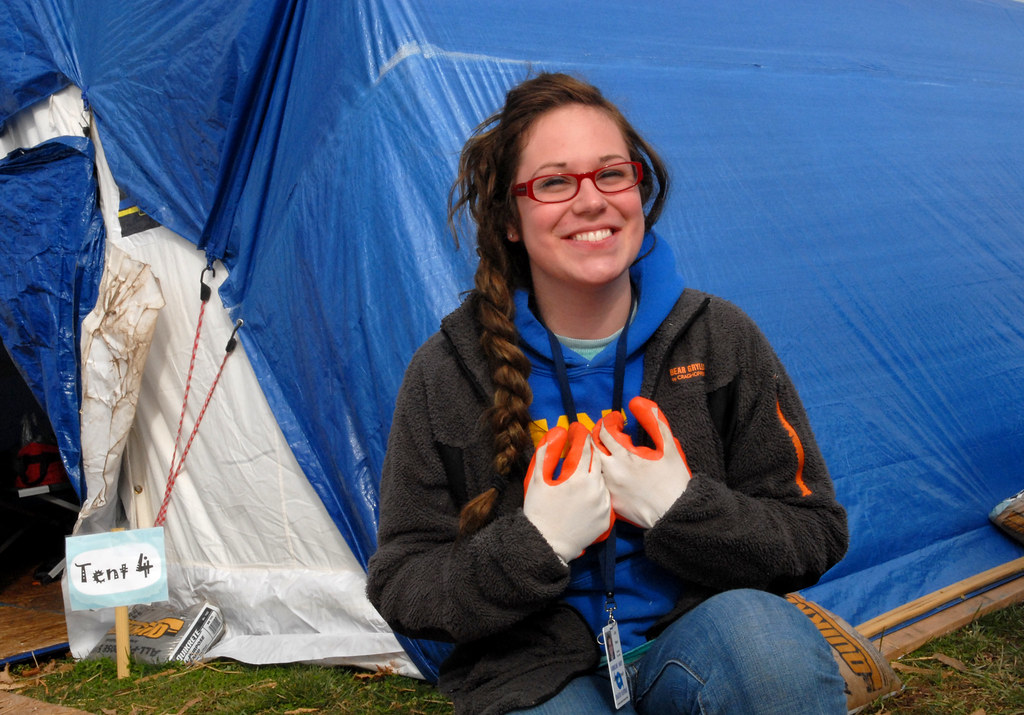 STATEN ISLAND, N.Y. ­– College junior Lilly Bolar chose to leave her regular spring break job posing children for Easter pictures in a mall photography studio to work with fellow students cleaning up Staten Island home severely affected by Hurricane Sandy. Bolar, who came with seven other students from her Bible study group at Life Point Baptist in Mt. Vernon, Ohio, said she wanted to do something on her break to help others.

The 21-year-old worked long days with hundreds of students who came from across the country to serve during the Southern Baptist Disaster Relief collegiate recovery response. The effort, coordinated by the North American Mission Board and the Baptist Convention of New York, will continue through mid-April. Project coordinator Bruce Poss said NAMB plans to have a two-year presence in the area. Poss said the need continues for more team leaders for recovery and rebuild.

The students, volunteers and staff live together in a tent city, temporary housing for workers, set up by NAMB on the grounds of Zion Lutheran Church on Staten Island. Ten heated tents, housing about 16 students each, and two bunkhouse trailers for staff serve as living quarters. The church’s parking lot is filled with NAMB work trailers and supply trucks and a NAMB command trailer where staff coordinate jobs and volunteers.

Though the day is long and full for the students, Bolar said she came to serve and wanted to push herself. She roughed it, using port-o-potties and washing her face in cold water in outdoor sinks in the morning. Sometimes she settled for a cold shower in the evening. One day her group worked on three job sites. They went from one flooded home to the next, sometimes working in the freezing cold. The team worked for hours gutting one home, including taking up the bathroom’s tile floor. They also power-washed outside and sprayed for mold.

“I’m lazy and if I can do the bare minimum that’s what I usually do,” said Bolar. “I’m better at school work or regular work than coming out here and taking up a hammer,” she said.

Coming from a small town in Ohio, Bolar said she had never seen hurricane damage. The DR ministry was eye opening.

“Mt. Vernon is a really small town and we’re kind of in a bubble. We have a Wal-Mart, but we’re getting bigger with a Buffalo Wild Wings and a Chipotle, which is unheard of in Mt. Vernon.” she jokes.

Seeing such destruction in her own country was difficult for Bolar. Previously she had participated in missions in Mexico and Costa Rica saying she expected conditions to be harsh overseas.

“But in America, you think everyone is fine and comfortable–that bad things don’t happen to us. Seeing the homeowners is really sad because they can’t even live in their own homes. I was just so grateful that we could come in and do what they felt like they couldn’t–do the hard labor and be there for them.”

One homeowner Bolar met was glad the students came to help.

“She kept saying to us, ‘Thank you so much. God bless you,’” Bolar said.

Reflecting on the week, Bolar said the hard work was worth it. She said she was inspired by the homeowners and also by one of her teammate’s efforts.

“She’s a go-getter. If there’s something to do, she just goes and does it even if she doesn’t know how at first. People look up to people who work really hard. That’s changed my mindset. I felt like I was at boot camp, but it was a lot of fun,” said Bolar.