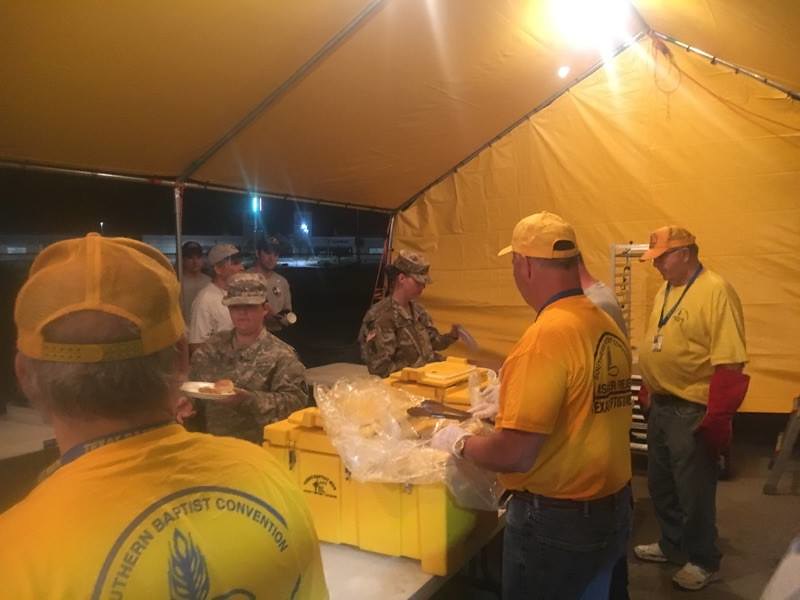 HOUSTON (BP) — As of Monday morning, news outlets reported that Hurricane Harvey had already dropped 11 trillion gallons of rain over South Texas. More than 300,000 customers were without power. Officials have declared 62 counties disaster areas as the initial destruction caused by 132 mile-per-hour wind gusts has been showered with unprecedented levels of rain.

In the immediate aftermath of the storm, Southern Baptist Disaster Relief (SBDR) expected some of the hardest hit regions to be accessible only to search and rescue teams.

Southern Baptists of Texas Convention Disaster Relief (SBTCDR) teams reported that they were still in a holding pattern as flooding closed numerous roads. Many of the rivers had not yet crested to their expected flood levels. As that happens, the number of road closings is expected to go up, making it even more difficult to send recovery units.

Daniel White of the SBTCDR team said, “I have been hearing reports from different people that this may be worse than [Hurricane] Katrina. It may be the largest national disaster in U.S. history. I have never seen anything like this in my time in Disaster Relief.”

SBTCDR Units are “ready to roll” into Rockport and Corpus Christi. They have dispatched laundry units into Aquila, to Latham Springs Baptist Camp and Retreat Center where 450 special needs evacuees have been settled.

Mass care feeding, administration and water treatment units were preparing to set up in Houston along with several DR chaplains. Once the flood waters start to recede, SBTCDR will be ready with clean up and recovery as well as flood response teams.

Texas Baptist Men (TBM) have faced similar challenges getting teams into the heavily flooded areas. They have shower stations set up as far inland as San Antonio. Stations were also set up in LaGrange, west of Houston, in order to assist evacuees there.

Teams were able to edge in closer as the TBM set up a feeding unit near Victoria, 30 miles outside of the Port Lavaca area. In both Uvalde and Texas City, the county judge asked for teams to help with the evacuees and victims located there.

In Robstown, on the outskirts of Corpus Christi, teams set up a shower and laundry unit as well as a rapid response kitchen. One kitchen unit has been embedded with the search and rescue responders, going from city to city and feeding first responders as they conducted rescue operations.

Terry Henderson, Disaster Relief director for TBM, echoed White’s sentiments regarding the significance of the storm.

“I would compare this to Katrina or bigger,” Henderson said. “Our response is running smoother thanks to new technology, but this storm will probably affect a larger area than Katrina did.”

As TBM prepares to move into Houston, they have been tasked with providing meals for those sheltered in Houston’s George Brown Convention Center. They expect to provide at least 20,000 meals a day. Very soon, they will be moving into Katy and The Woodlands, suburbs of Houston, as the water has started to recede.

Leading up to the storm, Southern Baptists collaborated with the American Red Cross (ARC) to determine the best strategy for sending aid. The North American Mission Board’s (NAMB) Send Relief team will continue to work with ARC as Southern Baptists prepare to send volunteer teams.

A call for volunteers and prayer

There are several ways Southern Baptists can and will help out in the coming days, weeks and months.

In addition to traditional SBDR roles, NAMB’s Send Relief will be mobilizing up to 4,000 volunteers to serve in storm shelters, feeding kitchens, childcare units and in other capacities. Experience in Disaster Relief is not required, but background checks are necessary for those willing to serve in childcare.

Send Relief is currently waiting for specific instructions from government officials as to when it will be safe to enter affected areas, but volunteers and churches can email [email protected] to be added to the “mobilization ready” list.

SBDR and Send Relief will be providing long-term aid in the aftermath of Hurricane Harvey. Clean-up response teams will be mudding out houses and chainsaw crews will be clearing out fallen limbs. Beyond that, Southern Baptists anticipate being involved in rebuild efforts to assist homeowners.

“There are some events that mark a time in history for generations to come,” said Kevin Ezell, NAMB’s president. “I believe Hurricane Harvey is one of those events and Southern Baptists will be known by the way we respond.”

Donate online to SBDR or Send Relief by giving here. You can also text SENDRELIEF to 41444 to aid the residents of the Texas coast.

Pray for the survivors of Hurricane Harvey as well as for those who are working diligently to respond in the wake of this tragic storm. Pray for the first responders, aid workers and the volunteers who will be working tirelessly to restore the communities affected by the storm.