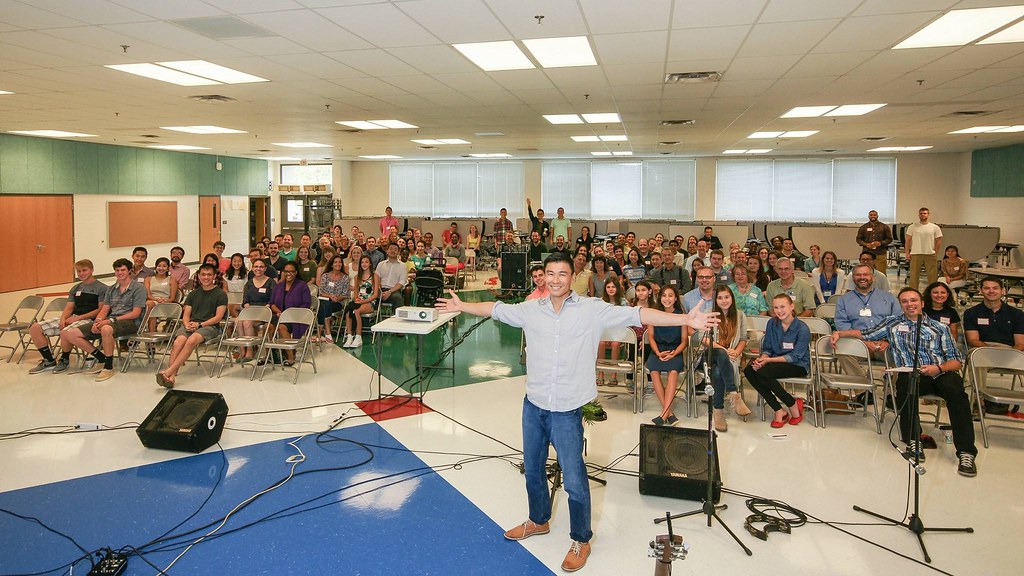 What connects Osaka, Japan and Fairfax, Virginia? Given that Fairfax lies less than 20 miles outside of Washington, D.C., one might expect several connections between the major Japanese port city and a suburb of the United States capital. But, one particular link has led to radical life change for several Fairfax residents.

On September 18, 2016, All Peoples Community Church (APCC), led by Pastor Kenji Adachi, held its first service. Pastor Adachi, born in Osaka, moved to Fairfax in 2003 to pastor a multiethnic church in the Washington D.C. metro area.

Growing up in Japan, Adachi and his family were non-practicing Buddhists, but when he was six years old, his family moved to the Bible Belt city of Greensboro, North Carolina, which, Adachi says, at the time had “more churches than Asians.”

After being saved at the age of 16, God called Adachi into the ministry while he was in college. He completed a Masters in Theology degree and set out for the D.C. area with his family where he would pastor for 12 years before starting the church planting process.

Adachi did not seek to plant out of a mere desire to do “something new.”

Adachi’s vision to see all these different types of people come to know Christ would become the namesake of All Peoples Community Church (APCC).

Adachi was part of the Send Washington D.C. effort of the North American Mission Board (NAMB).

Clint Clifton, NAMB’s city missionary in D.C., points out that “the vast majority of churches in [the Washington D.C. area] are plateaued and declining, and 80 percent of our churches have seen no growth in the past five years.”

Such trends coupled with Adachi’s clear passion for the D.C. area reveal the powerful and providential hand of God. The Lord brought a native son of Japan halfway around the world to plant , according to APCC’s vision statement, “a church for all peoples united in Christ, for Christ and for [their] community.” That vision fueled Adachi and his team to great success as the church, in just nine months, currently averages around 120 attenders every Sunday.

Before deciding to plant in Fairfax, Adachi had lived in the community for over ten years. Despite the leg up that such familiarity gave him, he knows that he has not been alone.

“I credit my core team that helped us launch,” Adachi says. “They were people that I had decade-long relationships with that I could trust and rely on.”

The Holy Spirit has moved in extraordinary ways throughout the process of planting APCC. Adachi readily points out, “Jesus is building His Church with His people.”

The fellowship that would become APCC started in Adachi’s home as a Bible study in January of 2016. As it grew, the gathering started meeting in a local school, Eagle View Elementary.

Outreach efforts have included block parties and a free sports camp at the school. APCC’s dedication to serving the community has continued.

“They are focused on neighborhood and school ministry rather than being an attraction from a regional standpoint,” Clifton said.

One of the highlights so far has been APCC’s First Annual Fall Harvest Festival that took place on October 29th, 2016. APCC and a team from a partner church, Church of the Cross in Grapevine, Texas, hosted an event that became a huge success in the community. Throughout the day, Adachi reported that “easily 500 people” attended the festival, and the local fire station even brought in their fire engines, which helped draw attention to the festivities.

On May 7, 2017, APCC had its first baptisms, and four people made public professions of faith in the Eagle View Elementary School cafeteria. Since the church’s launch, at least five people have been saved. Pastor Adachi can relay several stories of people whose faith has been rejuvenated through God’s working in the ministry of APCC.

Many unchurched people are attracted to the church first because of how it serves the community. Adachi calls this “hearing the Gospel backwards.” Conversations start with the subject of restoration and creating positive change in the community. Adachi’s lost neighbors start working for the Gospel and, in the process, hear the Gospel as Adachi and other members of his church explain the reason they work so hard to restore the brokenness in their community.

Adachi’s passion for all peoples and APCC’s dedication to the community have created a channel for the Good News to reach many in the Washington D.C. suburb of Fairfax, Va.