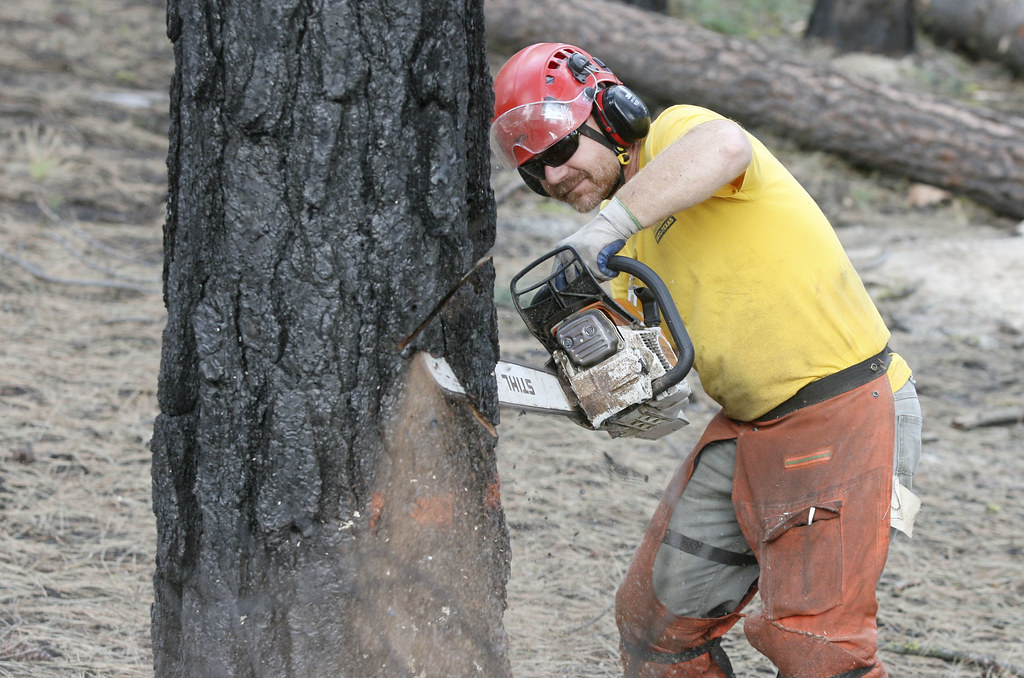 TWISP, Wash. – Patty Wetzel already knew the life-altering devastation that can come when fire strikes her home. She remembers well the night 37 years ago—as a young mother—when she and her family were forced to flee their burning home while still in their pajamas. Her family lost “everything” that night.

Last month fear gripped her as she was given 20 minutes to leave her Twisp, Wash., home before the fire she could already see in the horizon reached her property.

“It was just pure fright,” Wetzel said. “First you pray. I said ‘God, please don’t let this happen again.’ Then it was like, ‘Help everyone.’ It was coming so fast, and it was so hot.”

This time Wetzel’s home was spared. Despite burning a variety of spots on her backyard—including more than a dozen trees—her home suffered little more than smoke damage.

A month later the uninsured homeowner fretted over the burnt trees in her backyard and their potential damage to her home should they fall. That’s when she ran across a sign advertising “Southern Baptist Disaster Relief” efforts in Twisp.

“I need relief,” Wetzel thought as she went inside to inquire exactly what kind of relief was being offered. When she discovered that Southern Baptist volunteers could help with tree removal, she could see God’s hand in the discovery. The next day a team of Southern Baptist Disaster Relief (SBDR) volunteers from Texas and Idaho cut down about 15 trees in her backyard for free.

“It was so wonderful,” Wetzel said. “I can’t say enough about [Southern Baptists]. It’s amazing.”

The Carlton Complex fire has become the largest in state history, burning more than 256,000 acres of land and destroying more than 300 homes. Though the fire is now contained, mudslides near Twisp caused by flash floods Aug. 21 complicated the area’s relief needs. Ten homes were damaged or destroyed by the mudslides.

One poignant ministry SBDR volunteers perform for residents impacted by fire is going through the ash left behind and searching for valuables and irreplaceable family heirlooms. For example, the SBDR team from California spent time searching for lost Civil War-era jewelry and Native American artifacts lost by homeowners they’ve served in Washington relief efforts.

“When you see the delight in the homeowner’s eyes when you find something they’ve lost, it really pays for all the sacrifices [the team made to get here],” said Stan Harrison of Journey of Faith church in Redondo Beach, Calif.

As volunteers help fire survivors clean up debris and find valuables, they also attend to the spiritual needs that inevitably spring up from a life-altering disaster like the Carlton Complex fire.

“We let them know that it’s okay and God is there,” said Barbara Guidry, a veteran SBDR volunteer from LaBelle Baptist Church in Beaumont, Texas. “We share God’s Word. We bring them Bibles. We pray with them. We ask them if they believe in Christ and whether they’d like to accept Christ as their Savior.”

According to Richard Brown, the team leader or “blue hat” for the Oklahoma team ministering out of Malott, his team had an opportunity to lead a woman to Christ Aug. 20 outside a local store where the team had stopped to purchase supplies. He says the woman—who was originally from Norman, Okla.,—later committed her life to Jesus.

Brown hopes that the Washington homeowners served by SBDR see Jesus in the volunteers.

“We want them to see the hands and feet of Jesus,” said Brown, a member of Grace Place Baptist Church in Oklahoma City. “That’s the bottom line. We want people to see Jesus.”