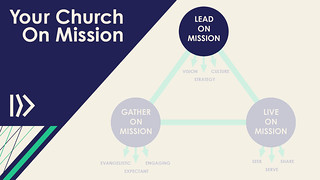 All organizations start with WHY, but only the great ones keep their WHY clear year after year.

— Simon Sinek (Start with Why: How Great Leaders Inspire Everyone to Take Action)

We have been told for years that everything rises and falls on leadership.

Yet, when many churches look to see what’s working and what isn’t, they rarely look to leadership.

They blame a variety of external things and circumstances that excuse the leader, the pastor, from being the issue.

If you ask the average pastor why his church isn’t more evangelistic you typically get one of three answers:

Funny thing is, if you ask the average congregation why they aren’t more evangelistic, guess what they say?  It’s the pastor’s fault!

I say, as pastors, we have to own it.

And the data proves it.

In top evangelistic churches the pastor is a strong leader. It is a pastor-led church.

Here’s a brief snapshot of the pastoral leadership of the top evangelistic churches:

In top evangelistic churches the church has moved beyond the who-is-in-charge debate and decided to let the pastor, with his God-given vision, lead the way.

And they organize around that, too.

The pastor has to lead the way in evangelism. He must model it. He must communicate it. He must keep it at the forefront. He must build it into the DNA of the church.

The pastor leads himself, the staff, the key leaders and the members with a passion for reaching the lost.

In Robert Coleman’s classic, The Master Plan of Evangelism, he states how important leadership is to the evangelism process.

Jesus was not trying to impress the crowd, but to usher in a kingdom. This meant that he needed people who could lead the multitudes. What good would it have been for his ultimate objective to arouse the masses to follow Him if these people had no subsequent supervision or instruction in the Way? It had been demonstrated on numerous occasions that the crowd was an easy prey to false gods when left without proper care. The masses were like helpless sheep wandering aimlessly without a shepherd (Mark 6:34; Matt. 9:36; 14:14). They were willing to follow almost anyone who came along with some promise for their welfare, be it friend or foe. That was the tragedy of the hour—the noble aspirations of the people were easily excited by Jesus, but just as quickly thwarted by the deceitful religious authorities who controlled them. The spiritually blind leaders of Israel ( John 8:44; 9:39–41; 12:40; see Matt. 23:1–39), though comparatively few in number, completely dominated the affairs of the people. For this reason, unless Jesus’ converts were given competent men of God to lead them on and protect them in the truth, they would soon fall into confusion and despair, and the last state would be worse than the first. Thus, before the world could ever be permanently helped, people would have to be raised up who could lead the multitudes in the things of God.

(The Master Plan of Evangelism, page 29)

As a pastor, you have been given to the church so that you can lead them toward the plan of God. And a staple part of God’s plan is evangelism.

Frankly, your church will never drift towards evangelism. The drift that takes place in the local church is always away from evangelism, away from missional, away from living “sent.” The drift of Western Christianity is unfortunately towards complacency, comfort and passivity.

Pastor, you have been raised up by God to lead your church to reach people with the gospel.

George Barna said, “The central conclusion is that the American church is dying due to a lack of strong leadership. In this time of unprecedented opportunity and plentiful resources the church is actually losing influence. The primary reason is the lack of leadership. Nothing is more important than leadership.” (Leaders on Leadership, page 18)

And there are some specific areas where you have to lead out. Vision. Strategy. Culture.

When you take the lead in those areas, and center them around the Great Commission, you will have a church that’s reaching people with the gospel.

Pastor, you can be either be an ineffective leader, or you can lead your church to be on mission.

There is no middle ground. Sharing the gospel isn’t exclusive to adults. Any person of any age can effectively share the...