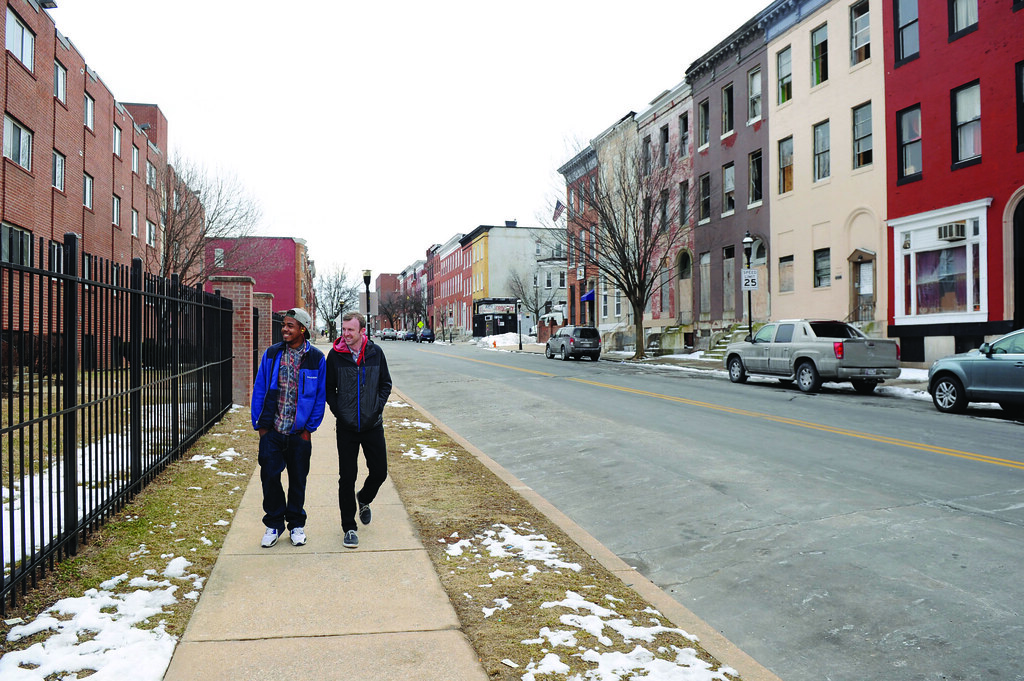 The neighborhood boomed from the early 1900s until about 1960. Nearby Royal Theatre hosted performances by all the greats—Nat King Cole, Duke Ellington, Billie Holiday and Dizzy Gillespie. The famed Pennsylvania Avenue was the center of an artistic renaissance rivaling Harlem’s in New York City.

But this was decades before Thomas took his first steps. The community had been an enviable collection of neighborhoods where families could make an honest living and raise their children.

But then the shift came.

During the 1970s, many families left for the suburbs, selling their homes and moving their businesses, rarely returning. It was an urban exodus that accelerated to all-too-familiar consequences—rapid decline and abandonment.

The once-glittering North Avenue was growing notorious. It was starting to become the Baltimore into which King Thomas would be born a decade or so later. In this Baltimore, Thomas knew by age 10 what his life would be like—no bright future.

His dad, a respected gang leader, was behind bars, and Thomas spent his life in and out of foster homes. He and his brothers had come to view their gang as family.

Baltimore is a microcosm of what many cities, their suburbs and even rural areas increasingly experience as North America and the world become more urban. Baltimore could be any city, especially as cities become dominant, global population centers.

According to United Nations reports, 2008 marked the first time in history more than half the world’s population was living in towns and cities. Global urbanization affects areas not typically thought of as urban. A 2012 USA Today study found that even in rural areas, Asian and Hispanic populations are growing more rapidly than whites. In their book Why Cities Matter, Stephen T. Um and Justin Buzzard define urban places as those experiencing increased density and diversity.

In other words, it doesn’t take skyscrapers cropping up in your backyard to experience the impact of urbanization in your community.

Even towns like Longview, Texas, reflect the effects of this global shift. And as the culture of Longview—population 84,000—shifts more Hispanic, Longview’s Mobberly Baptist Church (MBC) faces the challenge and opportunity of shifting with it.

MBC’s missions pastor Eric Perkins says Longview churches have a window of time to influence pockets of culture throughout the community.

“If we don’t have an intentionality to reach people, we’re going to create a greater divide between segments of population,” says Perkins. “Different segments almost live in their own world with socioeconomic barriers. Once these barriers are up, they’re almost impossible to overcome.”

Perkins says MBC would like to be a multicultural congregation that transcends cultural and socioeconomic barriers. Actively reaching into white, black, Hispanic, poor, destitute and fringe communities with the gospel and with service has garnered influence and opened ears for MBC. Likewise, building a church culture where people see every color and socioeconomic class, especially those different from theirs, is shaping the church’s future.

“It reminds us of who our community is, and it’s empowered us even more to reach our community,” Perkins says.

This has meant creating service ministries such as afterschool tutoring in multi-housing communities and sports ministries through Upward. It has also meant working carefully and sensitively with local law enforcement to establish a gospel presence in areas affected by drugs and prostitution.

Mobberly’s Hispanic work has centered on providing Spanish-speaking services and resources for first-generation Hispanics and a place for their English-speaking children to learn and hear the gospel.

One neighborhood and person at a time

These trends are also playing out in places like Springfield, Mo. Doug Irvin, pastor of Springfield’s Glenstone Baptist Church, says that even in their majority white and conservative city, the world is at their front door. Nearby Missouri State University has drawn Asian populations and even a small population of Saudi Arabians.

A growing Filipino population has come to the area for jobs. A Syrian family has even been attending Glenstone. They heard about Springfield from missionaries serving in their home country.

In addition to growing diversity, Springfield’s homeless population is growing, at a rate of 58 percent last year.

Irvin, who was only recently called as pastor, says he wants to see his church respond in whatever way possible. They’ve helped start a Filipino church in Springfield and are addressing homelessness through discipling those willing to receive guidance.

“I’m looking for the answer, too,” he says. “I think our American mentality is we look for the magic key and think it’s going to fix it all. But it’s not there. We have to look at the uniqueness of each situation.”

Baltimore church planter Joel Kurz has found this to be just as true in his city.

“To reach Baltimore, you have to reach the neighborhoods,” says Kurz, pastor of The Garden Church, Baltimore. “That’s why we intentionally moved into the same neighborhood as the church.”

King Thomas, the fledgling gang member, might not have paid much attention to God or to his own potential to impact his community if Kurz had chosen to live somewhere else.

Articulate, 21-year-old Thomas had seen a lot of life, and life lost, by the time he was 10. Stories like Thomas’ could be told from anywhere in North America, rural or urban, but their likelihood is greater in a place like Baltimore.

It’s not inevitable but in Baltimore’s North Avenue neighborhood, stories like Thomas’ are not uncommon. What is uncommon is his story over the past year.

Thomas has grown in his faith, his calling and a sense of mission to his community as part of an urban leadership intern program with Kurz, who came to Baltimore six years ago to start a citywide church. An unavoidable call to a neighborhood in the west side of the city shifted Kurz’s thinking.

But Kurz wanted to reach Baltimoreans. And to truly reach the city, his church would have to reflect the city. Already four years into the neighborhood focus, Kurz says this is a long-term process. His home truly has become the neighborhood he is reaching.

Often referred to simply as Upton, Kurz’s neighborhood includes the communities of Upton, Madison Park, Druid Heights and Marble Hill—all of which until the 1970s were an economic engine fueled by music, the arts and middle- and upper-income African American businessmen. Then came the dynamic shift.

The 2010 U.S. Census reported 45 percent of this area is below the poverty line. Many residents turn to gangs and selling drugs as a way of life. This is the only way of life Thomas grew up knowing. He had seen churches come and go but had experienced little of the gospel they proclaimed.

“There are a lot of churches in the neighborhood, but their people live in the suburbs. It’s kind of phony,” says Thomas. “We’re like, ‘You guys come on a Sunday and you preach the gospel to us. But you don’t know anything about us.’ When churches come to the city they have to at least build a relationship. It feels like we’re on the other side of the world.”

When Kurz and Thomas met, Thomas was a young believer and still a bit skeptical. But now he is teaching a kids’ Sunday School class at the church. Thomas is also a living testimony to his dad, brothers and former gang family that Christ can change the people in a place like North Avenue.

“In tough communities things get started and often don’t last,” Kurz says. “We really want to be faithful and continue to develop into a healthy church and be a faithful gospel presence in the community.”

One wonders though how a faithful gospel presence might directly impact an increasingly urbanized North America. Urbanization is a monumental trend with universal impact. The only real answer to the darker side of urbanization is the hope and love delivered through the gospel.

Can staying faithful in a tough neighborhood actually bring about the transformation of a place hit hard by urban challenges? Why do men like Thomas begin traveling the wrong path to begin with?

“It’s because of a lack of love,” says Thomas. “If you lack that love, you’re going to look for it—for people to show you that much attention. That’s what I was looking for. My only source of love was gangs.”

But his reasons for leaving the gang family and embracing a new family in Christ also speak of how churches might break down the barriers erected in cities.

“The love that Christians show to each other—I haven’t seen it anywhere else.”

Adam Miller writes for the North American Mission Board. This article originally appeared in the Summer 2014 edition of On Mission. Register to receive a free subscription.