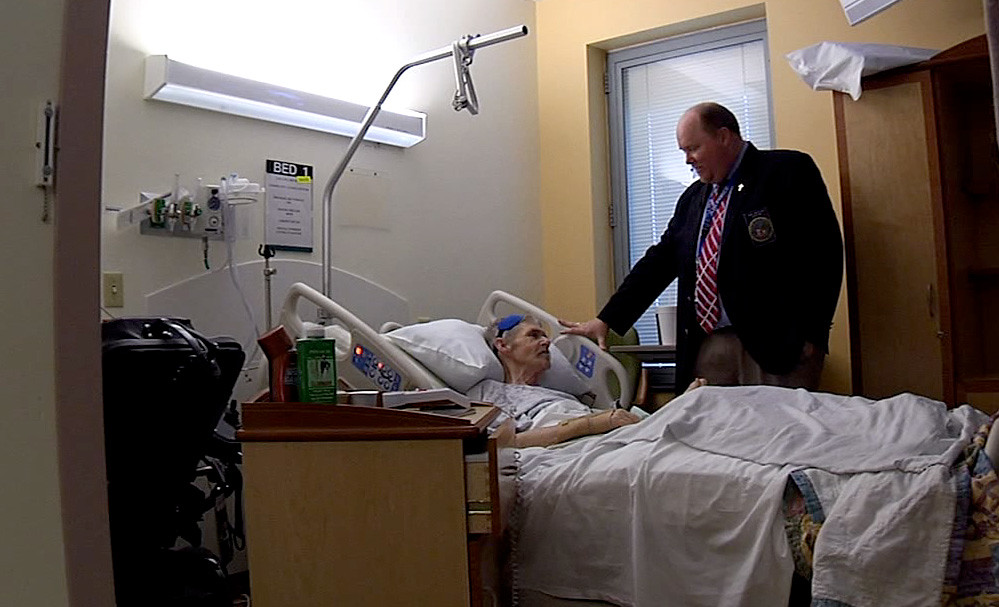 WEST PALM BEACH, Fla. – Bill Andrews* had spent his entire life serving others—his family, friends and his country. Now the Korean War veteran lies in a hospital bed waiting on death. The man who had so readily helped others, now feels like a burden to friends, family and the hospital staff surrounding him.

That’s where Southern Baptist chaplain Anthony Beazley (@chapbeaz) comes into the picture. The chaplain has been a regular fixture by Andrews’ bed at the West Palm Beach Veteran Affairs (VA) Medical Center in West Palm Beach, Fla., in recent days.

“I consider him a friend,” Beazley said. “I listen to him at the end of his life now. I listen to the pain—not the physical pain but the pain of loss. Things about his life that he had never shared with me before.”

And, as he listens, he comforts the best way he knows how—through God’s Word. Though Beazley must be able to help patients regardless of their spiritual backgrounds, he never shies away from pointing people to the Bible. He is one of more than 3,600 Southern Baptist chaplains endorsed by the North American Mission Board, serving in a variety of fields throughout North America. According to NAMB, 128 chaplains currently serve in VA hospitals.

Beazley once served in the Air Force and had been both a pastor and a hospital chaplain before his current position. He sees those to whom he ministers today as true American heroes. According to the U.S. Department of Veteran Affairs, more than 8.5 million American veterans were enrolled in its healthcare system in 2011.

“I don’t even like to call them patients,” Beazley said. “They’re truly heroes. They’ve been willing to sacrifice their lives for us.”

As a VA hospital chaplain Beazley, who serves as the chief of chaplain services at the hospital, operates in many ways as if he were a pastor of the patients in the hospital. Like a pastor, he cares for and counsels patients throughout the hospital. A typical day has him visiting patients, officiating funerals—and helping veterans with a variety of practical tasks that at times can bog them down.

Beazley says chaplains in active service and in veterans hospitals often get the reputation as the go-to-person when someone’s out of options. Beazley frequently helps patients find what they need—like getting their questions answered or acquiring help from another area of the Department of Veterans Affairs—regardless of whether the need is spiritual or not.

Often, his most important ministry is simply listening.

“Many times they just need that ministry of presence,” Beazley said. “They just want someone to hear them, to pray with them and to share their struggle with them.”

Frequently, the conversation turns spiritual. The hospital where Beazley serves has one of the oldest patient populations of any VA hospital in the country. His patients typically turn to eternal questions.

“They want to know about what’s out there,” Beazley said. “Many times questions come up—like ‘What’s next?’ or ‘What will God say to me?’ I’m able to share a bit of Scripture with them and help them see what’s in store for them in eternity. I’m not there to proselytize, but I’ve been able to talk to people at the end of life who wanted to hear the gospel.”

Beazley loves it. Although he’s often called upon to preach, providing pastoral care is his true calling. As a former serviceman himself, he feels at home with other veterans.

“Some days I want to walk away and say, ‘I’ve had it,’” Beazley said. “But I know God has called me to this. If God has called me to do this, He’s looking out for me. I know I’m in His will. And He will shower me with His grace and give me the strength to come back the next day and do it all over again.”

Beazley recommends that others who feel that God might be leading them into a chaplaincy hospital—for veterans or otherwise—to take the time to get any possible training, both in academic and on-the-job settings. Because of the important nature of the work, he suggests potential chaplains don’t take shortcuts in training just to get it behind them. He also recommends those interested serve with their church’s hospital ministry or shadow their pastor as he makes hospital calls.

God uses Southern Baptists to provide much of the strength Beazley needs. He appreciates the cards, letters and prayers that come from being a North American Mission Board-endorsed chaplain. One man sends Beazley an email of encouragement every year on his birthday—and promises his prayers throughout the year.

“I couldn’t do what I do without the support of Southern Baptists,” Beazley added. “Even at a big hospital, it’s often lonely as a chaplain. We’re often listening to the needs of others, but people aren’t there to listen to ours. So when Southern Baptists send a card or a letter, it’s very encouraging to know we’re not alone.”

*Name has been changed to protect the patient’s privacy.