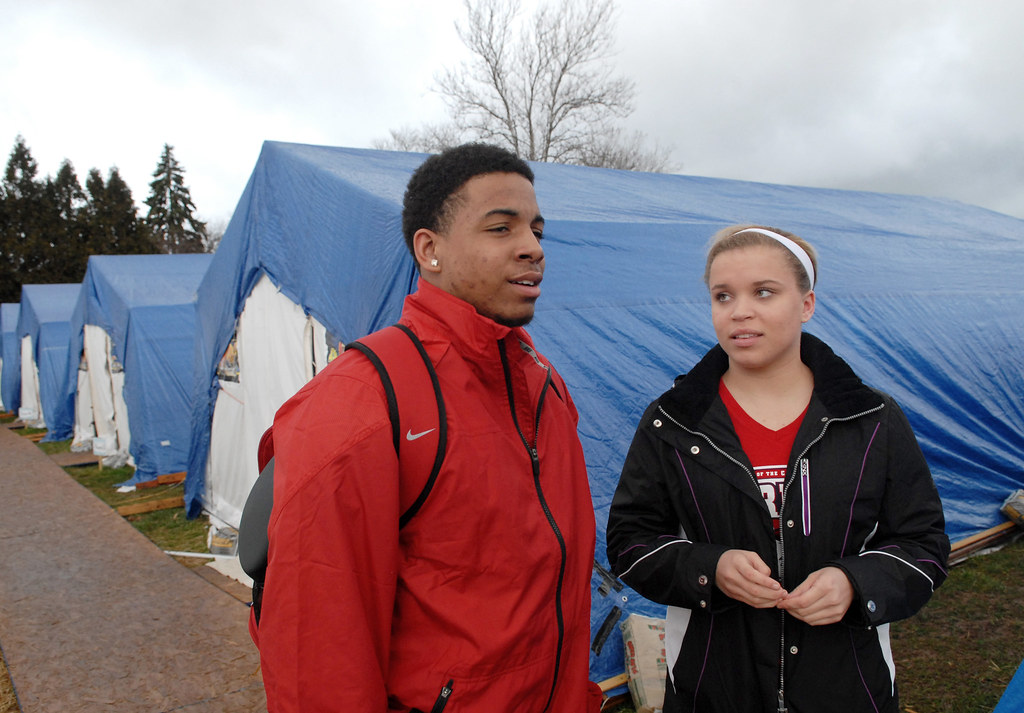 STATEN ISLAND, N.Y. – Staten Island resident Dominick Camerade was hard hit by Hurricane Sandy. Five months after the storm ravaged the area, Camerade and others in the community continue repairing their lives. Camerade’s home in New Dorp Beach and his small engine repair shop next door were severely damaged by flooding.

After losing almost everything he had built over a lifetime, the recent retiree says his cries to God were answered this week when Southern Baptist Disaster Relief collegiate volunteers helped him clean up his properties and spent time with him to lift his spirits.

“These kids did more work in two days than I could have done in two months,” Camerade said. “It’s amazing that they would take their spring break to come and help us.”

Students from Resonate Church in Moscow, Idaho and Pullman, Wash., worked with Camerade for two days cleaning up and moving hundreds of damaged lawn mowers, weedwackers, snow plows and other small engines that flood waters ruined. Camerade hopes to sell the damaged machines as scrap metal.

The group is one of seven student teams from states across the nation who are taking part in the SBC Collegiate Spring Break’s recovery response to Staten Island this week. The project is being coordinated by the North American Mission Board.

Resonate Church student Jessica McGettigan, 18, on her first mission trip said Camerade’s attitude was encouraging to her and inspired the whole team.

“He’s lost so much but he kept his faith,” she said.

Bringing hope to residents who often feel forgotten after a disaster is what teams such as Resonate and other collegiate volunteers are doing through the middle of April.

This week students were working on mud-outs, mold remediation, tear-outs, clean up and yard debris removal. They are also installing insulation and hanging sheetrock.

“The students are willing to work and to do what needs to be done,” Cape said of the students’ whatever it takes attitude.

Recovery Jobs Coordinator Marvin Corbin, a SBDR volunteer from Ocala, Fla., agreed as he watched the students day to day get up at 5:30 a.m. and work a hard, long day on sites sometimes in the rain.

“It restores your faith in the youth of today,” he says.

Texas A&M graduate student Joe Terrell, 22, who helped insulate a home, admits it’s hard work, but it’s rewarding for him because he likes serving and seeing the progress made on a project.

“You see a house gutted and walk out and can almost begin to see a home,” he says.

Eighteen-year-old Angeliccaa Williams came on her first mission trip with the BCM of University of the Cumberlands of Williamsbury, Ky. Williams said she felt led to serve and has seen things she never has experienced. Her team has worked on a mud-out for three days in a home in Midland Beach.

“The house was just floors, beams and a roof when we walked in. There was nothing inside,” she said.

The group met the homeowner, a mother with two teenaged daughters. Williams said it was emotionally hard for her.

“The woman almost cried before we lifted a finger.”

The appreciation from the community has been felt says NAMB Spring Break project coordinator Bruce Poss. “They didn’t know much about Southern Baptists but now they do.” Poss says that NAMB plans a two-year presence for the area’s recovery.

“They were so happy to see us and it makes all the work worth it.”

Kelsey Dickson, 21, also from Central Baptist, says though she had seen all the news coverage about the storm’s destruction it was the first time for her to see such loss.

“To see all of their possessions in a pile makes me wonder how anyone, especially non-believers, can go through this and have any hope left,” she said.

“Our job as Christians is to build up others when they can’t help themselves and to show the love of Christ. The act itself is to glorify God in the end.”